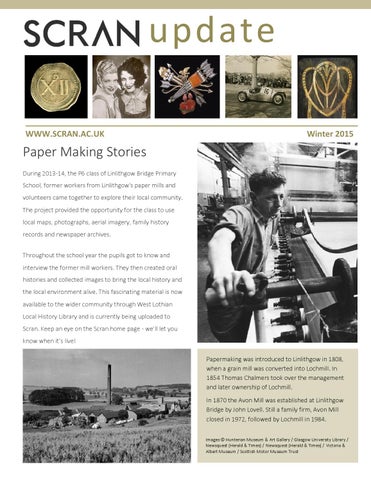 Paper Making Stories During 2013-14, the P6 class of Linlithgow Bridge Primary School, former workers from Linlithgow's paper mills and volunteers came together to explore their local community. The project provided the opportunity for the class to use local maps, photographs, aerial imagery, family history records and newspaper archives. Throughout the school year the pupils got to know and interview the former mill workers. They then created oral histories and collected images to bring the local history and the local environment alive. This fascinating material is now available to the wider community through West Lothian Local History Library and is currently being uploaded to Scran. Keep an eye on the Scran home page - we’ll let you know when it’s live! Papermaking was introduced to Linlithgow in 1808, when a grain mill was converted into Lochmill. In 1854 Thomas Chalmers took over the management and later ownership of Lochmill. In 1870 the Avon Mill was established at Linlithgow Bridge by John Lovell. Still a family firm, Avon Mill closed in 1972, followed by Lochmill in 1984. Images © Hunterian Museum & Art Gallery / Glasgow University Library / Newsquest (Herald & Times) / Newsquest (Herald & Times) / Victoria & Albert Museum / Scottish Motor Museum Trust

Scran in Action We are always intrigued to hear about what you do with Scran. For example at St Thomas R.C Primary School in Keith, Primary 6 & 7 made a joint effort to become mini crofters and documented their learning journeys on a blog. Their teacher contacted us for some advice on using Scran and we were happy to help. We passed on some top tips for finding the best crofting resources. The project was all about learning to live sustainably today from people in the past.

Scran has its head in the clouds with new images of civilian aircraft, taking off and landing at various places including Edinburgh's Turnhouse Airport. These images were kindly licensed to us by professional photographer Alan Potts, who has a long-standing fascination with, and knowledge of, the world's aircraft. In fact he currently works on the National Collection of Aerial Photography NCAP collection.

The pupils unearthed a host of interesting imagery and information for their topic. Next they used the Scran Create tool to record the facts they had learned about crofting and were able to blog about it. Following the initial research phase of the project, the pupils continued to get hands-on with such activities as making butter & growing their own food. They even participated in a global video conference. You can have a look at other examples of good practice in our case studies area. Images ÂŠ David F McIntyre Collection / Alan Potts / Tom Kidd

We are on tenter hooks awaiting various new

Trainees on the Heritage Lottery Funded (HLF) Skills for the

contributions including Holy Loch Heritage - the

Future programme have created a new Pathfinder about

Burgh Hall and funded by HLF Sharing Heritage programme. It aimed to bring to life the 30 year period when the American Naval Base was sited at the Holy Loch, Dunoon.

Local schools from across Cowal learned about their heritage and interviewed local people with direct experience of this time. Participants worked with an oral historian and a film maker to record a range of stories on camera. We are excited to say that the resulting films will soon be available here on Scran.

Mercat Crosses are stone monuments typically dating to the 16th and 17th Centuries. They were erected to symbolise that a settlement had the right to hold markets. As well as markets, other events took place at these monuments, many of which still take place today. These included the public proclamation or announcements of news such as the birth of a new member of the royal family or the results of an election. They were also the place where criminals were punished. Criminals would have been attached to the Mercat Cross by

Other new & ongoing partnerships for 2015 include

iron chains and fittings called jougs or branks. You can find

out more about mercat crosses here.

Scran in a Box Did you know Scran supplies the technology behind several other websites? These services include the brilliant Books for All, Screening Shorts, Scotland on Screen and Languages on Screen. Books for All (BfA) provides books in accessible formats for pupils who have difficulty with ordinary printed text, including those with dyslexia, who have a physical disability or who are blind or partially sighted. The BfA database is managed by CALL Scotland. Developed by Creative Scotland and Education Scotland, Screening Shorts is a resource to help teachers deliver moving image education (MIE). The use of MIE across the curriculum offers engaging and exciting opportunities. It gets learners speaking, listening, reading, writing and creating. Short films are ideal as they are complete, easily accessible and good for multiple viewing. Scotland on Screen provides access to films from the Scottish Screen Archive, part of the National Library of Scotland, with accompanying learning resources designed for use in the classroom or other learning settings. The materials can also be used by the general public for research and enjoyment. The films document over a century of Scottish lives on film, with particular reference to social, economic and environmental change. Languages on Screen is an exciting educational resource that puts French, German, Spanish and Italian - and Gaelic - short films online for free download and use. Using short films as a focus for study helps place language within its culture and gives young people insights into the lives and lifestyles of people in other countries. All of these fabulous resources, including Scran, are available through the Glow platform for Scottish schools on the RMUnify platform too.

New Subscribers We are delighted to say we have brand new users, including Snowdon School in Stirling and Epsom College who are accessing our eclectic content in Malaysia. 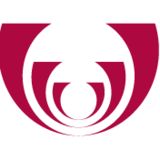