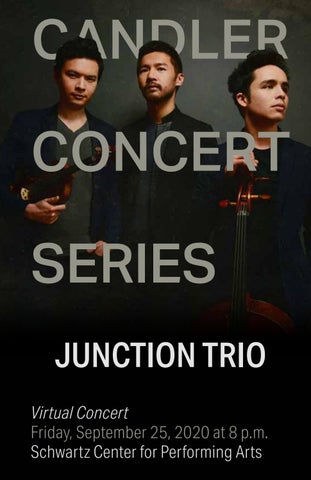 Photographs and Recordings Digital capture or recording of this concert is not permitted. Event and Program Information Available online at schwartz.emory.edu Photos By Shervin Lainez, unless otherwise indicated. Acknowledgment Eternal thanks to Donna and Marvin Schwartz for their many contributions.

Ghosts As the title suggests, Ghosts is haunted by musical material from the slow movement of Ludwig van Beethoven’s op. 70, No. 1 “Ghost” trio. Ghosts reanimates and transforms it into scenes of tense psychological unease and repeated fits of frustrated expectations. Even in moments of temporal stasis, John Zorn wields the absence of direction to collapse the musical universe into one obsessive thought or feeling (something certainly found in Beethoven’s music). Timbre itself is deliberately suppressed and distorted: Violin and cello play with mutes for nearly the entire piece and the piano is often manipulated by reaching inside to dampen pitches, scrape strings, and manipulate the standard identity and function of the instrument. Ghosts exists in a perpetual state of emergence: A dream-like state of constantly “becoming,” driven by unknown psychological desires and nostalgia. Unlike in Beethoven’s music, however, listeners will quickly hear that the nostalgia in Ghosts is not the same kind of romantic yearning for the past in wide-eyed reverie. If anything, I feel it as something closer to the concept of the “uncanny valley.” Although familiar musical signifiers make appearances (traditional harmonies, quotations, etc.), what they represent is somehow slightly off—we recognize them, yet we suspect that they aren’t exactly what they appear to be. The familiar signifiers no longer function as means of orientation, grounded in shared “objective” reality. They are metaphysical ambiguities. They are hallucinations. Ghosts exists as a piece on its own, but can also be performed as the middle movement of a suite of three piano trios (the outer two being The Aristos and Hexentarot). On the title page of the first trio, Zorn includes a quote of T.S. Eliot: “We shall not cease from exploration/And the end of all our exploring/ Will be to arrive where we started/And know the place for the first time.” —Jay Campbell

“Don’t only practice your art, but 2

Piano Trio in B-flat Major, op. 97, “Archduke” In the last decades of his life, Ludwig van Beethoven’s most important and reliable patron and most demanding student was Archduke Rudolph. The youngest brother of the Habsburg Emperor Franz I, Rudolph’s ill health in his youth led him away from the military and into the church, which allowed him to pursue his interest in music. He began taking lessons on the piano and in composition from the greatest musical genius of his time. He was a difficult student, scheduling lessons when it suited him, without regard to Beethoven’s position. As the descendent of three centuries of emperors, Rudolph was used to getting his way. However, he was paying handsomely for his lessons, and he proved to be both an excellent pianist and a very capable composer. As a patron, he was one of the three aristocrats who guaranteed Beethoven’s 1809 annuity, giving him an unprecedented degree of artistic freedom, and when one of his partners went bankrupt and the other died, Rudolph increased his own contribution. When Rudolph departed Vienna in the face of the advancing French army in May 1809, Beethoven composed the first movement of a sonata labeled on the manuscript Lebewohl, or Farewell. A second movement, Absence, followed, and only when Rudolph was safely home was the work completed with The Return. The most famous of all piano trios was completed in 1811, and was, like many other works of the period, dedicated to the archduke.

About Junction Trio Critically acclaimed pianist and composer Conrad Tao joins with violinist Stefan Jackiw and cellist Jay Campbell to form the eclectic new ensemble Junction Trio. The trio has performed at Washington Performing Arts, Portland Ovations, Rockport Music, the Chautauqua Institution, and the Royal Conservatory in Toronto. The 2019–2020 season included debuts with the Orange County Philharmonic Society, Chamber Music Albuquerque, BIG ARTS Sanibel, and Valley Classical Concerts in Northampton, Massachusetts. Each internationally recognized on their own, these visionary artists come together to share their poetic interpretations and impeccable technique. A musician of “probing intellect and open-hearted vision” (New York Times), Conrad Tao has appeared worldwide as a pianist and composer. Named “one of five classical music faces to watch” (New York Times) last season, Tao is a recipient of the prestigious Avery Fisher Career Grant and a Gilmore Young Artist—an honor awarded every two years to the most promising American pianists of the new generation. In the 2019–2020 season, Tao made his recital debut with the Los Angeles Philharmonic at Walt Disney Hall, and was presented in recital by Carnegie Hall and by the Cleveland Orchestra at Severance Hall. Tao’s debut disc, Voyages, was declared a “spiky debut” by the New Yorker’s Alex Ross, and his second album, Pictures, was hailed by the New York Times as “a fascinating album [by] a thoughtful artist and dynamic performer . . . played with enormous imagination, color and command.” Tao’s third album, Compassion, was released in fall 2019. Tao was born in Urbana, Illinois, in 1994. He studied piano with Emilio del Rosario in Chicago and Yoheved Kaplinsky in New York, and composition with Christopher Theofanidis. One of America’s foremost violinists, Stefan Jackiw captivates audiences by combining poetry and purity with impeccable technique. Praised for his “uncommon musical substance” that is “striking for its intelligence and sensitivity” (Boston Globe), Jackiw has appeared as soloist with the Boston, Chicago, ©SangwookLee

Cleveland, New York, Philadelphia, and San Francisco symphony orchestras, among others. Last season, Jackiw returned to the Bournemouth Symphony, the Helsinki Philharmonic, and the RTÉ National Symphony in Dublin. Past recital highlights include performances of the complete Ives violin sonatas with Jeremy Denk at Tanglewood and Boston’s Jordan Hall, and performances of the complete Brahms violin sonatas, which Jackiw recorded for Sony. With the Deutsche Kammerphilharmonie under Matthias Pintscher, Jackiw gave the world premiere of American composer David Fulmer’s Violin Concerto No. 2, “Jubilant Arcs,” commissioned for Jackiw by the Heidelberg Festival. Born to physicist parents of Korean and German descent, Jackiw began playing the violin at age four. His teachers have included Zinaida Gilels, Michèle Auclair, and Donald Weilerstein. He has a bachelor of arts degree from Harvard University and an artist diploma from the New England Conservatory. He lives in New York City. Cellist Jay Campbell brings his eclectic, creative interests to bear in performances that the New York Times calls “electrifying” and the Washington Post calls “gentle, poignant, and deeply moving.” The only musician ever to receive two Avery Fisher Career Grants—in 2016 as a soloist, and again in 2019 as a member of the JACK Quartet—he approaches old and new music with the same curiosity and commitment. Campbell made his debut with the New York Philharmonic in 2013 and worked with Alan Gilbert in 2016 as artistic director for Ligeti Forward, a series featured at the New York Philharmonic Biennial at the Metropolitan Museum of Art. In 2017, he served as artist in residence at the Lucerne Festival alongside violinist Patricia Kopatchinskaja, with whom he later appeared at New York’s Park Avenue Armory and the Ojai Music Festival. Dedicated to introducing audiences to important contemporary music, Campbell has worked with some of the most creative musicians of our time, including Pierre Boulez, Elliott Carter, Matthias Pintscher, Georg Friedrich Haas, and many others. His close association with John Zorn led to the 2015 release of Hen to Pan (Tzadik), which featured all works written for Campbell, and was listed in the New York Times year-end Best Recordings of 2015. A committed chamber musician, Campbell is a member of the JACK Quartet as well as the Junction Trio.

CANDLER CONCERT SERIES The Flora Glenn Candler Concert Series brings internationally-renowned artists to Emory University's Schwartz Center for Performing Artsâ&#x20AC;&#x201D;to the Emerson Concert Hall or the online virtual stage. The artists come from a variety of musical genres including traditional classical ensembles, such as the Royal Philharmonic Orchestra and contemporary artists, like Kronos Quartet. The series is made possible by a generous gift from the late Flora Glenn Candler, a friend and patron of music at Emory University.