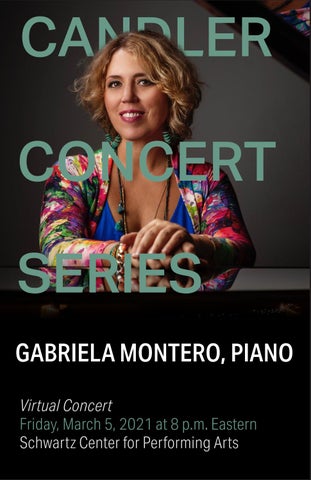 Photographs and Recordings Digital capture or recording of this concert is not permitted. Event and Program Information Available online at schwartz.emory.edu Cover Design By Nick Surbey Gabriela Montero Photos By Anders Brogaard Acknowledgment Eternal thanks to Donna and Marvin Schwartz for their many contributions.

Scenes from Childhood No. 1, Morning in Caracas No. 2, Wild Parrots No. 3, The Drunk No. 4, Missing Home No. 5, My Mother’s Lullaby Improvisations

Scenes from Childhood Program Notes Amanecer en Caracas (Sunrise in Caracas) Caracas is a huge, chaotic, urban mess, enveloped by the glorious Avila mountain. It has changed dramatically in the last 20 years. It is now a war zone, effectively. But waking up in Caracas, as I remember it back then, was glorious. The sound of exotic birds, frogs, and the multicolored skyline surrounding El Avila is etched in my memory. Chaos within overwhelming beauty.

The Crazy Parrots In Caracas, you can still see giant macaws, parakeets, and parrots zooming through the urban concrete maze. The wild birds of my childhood still excite the residents of this suffering, collapsed, urban jungle, coloring the Caracas skyline. Nature is the constant, while mankind can transform the South American experience with one brushstroke of ideology.

El Borrachito (The Drunk) We lived in my grandmother’s apartment for a while in an area called Sebucan. The apartment faced an asylum, a small bodega (tiny market), and a newspaper stand. I remember a drunk vagrant, a rail-thin man who would march up and down the street playing salsa music on his little beaten up boombox.

Extrañando mi país (Missing Home) When I was eight years old, my family took me to the United States to continue my piano studies. I never recovered from leaving my beloved Venezuela. I always returned, intermittently, but the scars of abandoning everything and everyone I loved, remained with me. It was the most painful sacrifice I made for my music.

La canción de mi madre (My Mother’s Lullaby) As it is customary with most Venezuelan mothers, my mother would sing me to sleep. She is not a singer. In fact, I am the only musician in my family. But it is in this way that I first began connecting the sounds to my fingers. At just a few months old, I began to find the sounds on my little toy piano. There is no particular melody I improvise to in this last piece. It is just an emotional recollection of the sweetness of her voice, the innocent purity of that time, and a period of my life long gone. —Gabriela Montero

Gabriela Montero, piano Gabriela Montero’s visionary interpretations and unique compositional gifts have garnered her critical acclaim and a devoted following on the world stage. Anthony Tommasini remarked in the New York Times that “Montero’s playing had everything: crackling rhythmic brio, subtle shadings, steely power . . . soulful lyricism . . . unsentimental expressivity.” Recipient of the prestigious 2018 Heidelberger Frühling Music Prize, Montero’s recent and forthcoming highlights include debuts New World Symphony (Michael Tilson Thomas), Yomiuri Nippon Symphony in Tokyo (Aziz Shokhakimov), Orquesta de Valencia (Pablo Heras-Casado), and the Bournemouth Symphony (Carlos Miguel Prieto), the latter of which featured her as artist in residence for the 2019–2020 season. Montero also recently performed her own “Latin” Concerto with the Orchestra of the Americas at the Hamburg Elbphilharmonie and Edinburgh Festival, as well as at Carnegie Hall and the New World Center with the NYO2. Additional highlights include a European tour with the City of Birmingham Symphony and Mirga Gražinytė-Tyla; a second tour with the cutting edge Scottish Ensemble, this time with Montero’s latest composition Babel as the centerpiece of the program; her long-awaited return to Warsaw for the Chopin in Europe Festival, marking 23 years since her prize win at the International Chopin Piano Competition; and return invitations to work with Marin Alsop and the Baltimore Symphony, Jaime Martin and the Orquestra de Cadaqués for concerts in Madrid and Barcelona, and Alexander Shelley and the National Arts Centre Orchestra of Canada. Celebrated for her exceptional musicality and ability to improvise, Montero has performed with many of the world’s leading orchestras to date, including the Royal Liverpool, Rotterdam, Dresden, Oslo, Vienna Radio, and Netherlands Radio philharmonic orchestras; the Gewandhausorchester Leipzig, NDR Sinfonieorchester Hamburg, NDR Radiophilharmonie Hannover, Zürcher Kammerorchester, Academy of St Martin in the Fields, and Australian Chamber Orchestra; the Pittsburgh, Detroit, Houston, Atlanta, Toronto, Baltimore, Vienna, City of Birmingham, Barcelona, Lucerne, and Sydney symphony orchestras; the Belgian National Orchestra, Württembergisches Kammerorchester Heilbronn, the Cleveland Orchestra, Orchestra of the Komische Oper Berlin, and Residentie Orkest.

A graduate and fellow of the Royal Academy of Music in London, Montero is also a frequent recitalist and chamber musician, having given concerts at such distinguished venues as Wigmore Hall, Kennedy Center, Vienna Konzerthaus, Berlin Philharmonie, Frankfurt Alte Oper, Cologne Philharmonie, Leipzig Gewandhaus, Munich Herkulessaal, Sydney Opera House, Amsterdam Concertgebouw, Luxembourg Philharmonie, Lisbon Gulbenkian Museum, Manchester Bridgewater Hall, Seoul’s LG Arts Centre, Hong Kong City Hall, the National Concert Hall in Taipei, and at the Barbican’s ‘Sound Unbound’, Edinburgh, Salzburg, SettembreMusica in Milan and Turin, Lucerne, Ravinia, Gstaad, Saint-Denis, Violon sur le Sable, Aldeburgh, Cheltenham, Rheingau, Ruhr, Trondheim, Bergen, and Lugano festivals. Montero is also an award-winning and bestselling recording artist. Her most recent album, released in autumn 2019 on the Orchid Classics label, features her own “Latin” Concerto and Ravel’s Piano Concerto in G Major, recorded with the Orchestra of the Americas in Frutillar, Chile. Her previous recording on Orchid Classics features Rachmaninov’s Piano Concerto No. 2 and her first orchestral composition, Ex Patria, winning Montero her first Latin Grammy for Best Classical Album (Mejor Álbum de Música Clásica). Others include Bach and Beyond, which held the top spot on the Billboard Classical Charts for several months and garnered her two Echo Klassik Awards: the 2006 Keyboard Instrumentalist of the Year and 2007 Award for Classical Music without Borders. In 2008, she also received a Grammy nomination for her album Baroque, and in 2010 she released Solatino, a recording inspired by her Venezuelan homeland and devoted to works by Latin American composers. Montero made her formal debut as a composer with Ex Patria, a tone poem designed to illustrate and protest Venezuela’s descent into lawlessness, corruption, and violence. The piece was premiered in 2011 by the Academy of St Martin in the Fields. Montero’s first full-length composition, Piano Concerto No. 1, the “Latin“ Concerto, —concert was first performed at the Leipzig Gewandhaus with the MDR Sinfonieorchester and Kristjan Järvi, and subsequently recorded and filmed with the Orchestra of the Americas for the ARTE Konzert channel. Winner of the fourth International Beethoven Award, Montero is a committed advocate for human rights, whose

“Mont the so artist class music should apprec

voice regularly reaches beyond the concert hall. She was named an honorary consul by Amnesty International in 2015, and recognized with Outstanding Work in the Field of Human Rights by the Human Rights Foundation for her ongoing commitment to human rights advocacy in Venezuela. She was invited to participate in the 2013 Women of the World Festival at London’s Southbank Centre, and has spoken and performed twice at the World Economic Forum in Davos-Klosters. She was also awarded the 2012 Rockefeller Award for her contribution to the arts and was a featured performer at Barack Obama’s 2008 Presidential Inauguration. Born in Venezuela, Montero began her piano studies at age four with Lyl Tiempo, making her concerto debut at age eight in her hometown of Caracas. This led to a scholarship from the government to study privately in the United States and then at the Royal Academy of Music in London with Hamish Milne.

tero is ort of whom sical lovers d most ciate.“

Camille Thomas, cello Candler Concert Series Friday, April 9 at 8 p.m. The first cellist to be signed by the prestigious Deutsche Grammophon label in more than 40 years, Franco-Belgian cellist Camille Thomas blends a brilliant command of her instrument with a rare musicality. Thomas’s fascinating recital programs offer traditional and underplayed repertoire, including selections from her recently released album, Voice of Hope.

CANDLER CONCERT SERIES The Flora Glenn Candler Concert Series brings internationally-renowned artists to Emory University's Schwartz Center for Performing Arts—to the Emerson Concert Hall or the online virtual stage. The artists come from a variety of musical genres including traditional classical ensembles, such as the Royal Philharmonic Orchestra and contemporary artists, like Kronos Quartet. The series is made possible by a generous gift from the late Flora Glenn Candler, a friend and patron of music at Emory University. 12