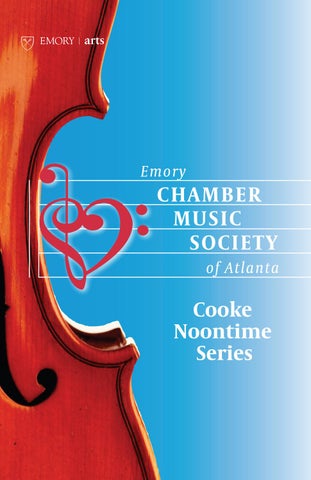 Elisabeth Remy Johnson, harp Elisabeth Remy Johnson was appointed principal harpist of the Atlanta Symphony Orchestra (ASO) in 1995. She holds the endowed Delta Air Lines Chair, and also held the honorary UPS Community Service Chair for the 2006–2007 season. With the ASO, Remy Johnson has performed concertos by Debussy, Handel, Mozart, and Ginastera. Winner of first-place awards in competitions of the American Harp Society and the American String Teachers Association, Remy Johnson is also an NFAA/ARTS awardee. She studied with Ann Hobson Pilot in Boston and with Alice Chalifoux at the Salzedo Summer Harp Colony in Camden, Maine. She graduated from Harvard University Phi Beta Kappa with a double major in music and French. In addition to her numerous orchestra recordings with the ASO, Remy Johnson recorded Britten’s Ceremony of Carols with Robert Shaw and his Chamber Singers for the Telarc recording A Robert Shaw Christmas: Angels on High. Her first solo CD, Whirlwind, recorded on the ACA Digital Recording label, was released in fall 2000. A flute and harp recording with ASO principal flutist Christina Smith, Encantamiento, was released in fall 2008. The American Record Guide writes: “This collection is aptly named, for we have enchantment here long before we reach the composition with that title, and the sound of Elisabeth Remy Johnson’s harp is captured with exceptional brilliance, her artistry a constant joy.” In addition to frequent solo and chamber music recitals in the greater-Atlanta area, Remy Johnson has performed with the Atlanta Chamber Players and the Carolina Chamber Music Festival, and is a frequent guest at the Meeting 5

House Chamber Music Festival on Cape Cod. Remy Johnson has performed at the American Harp Society National Conventions numerous times. Recently, she was invited to give a solo recital at the International Harp Festival in Rio de Janeiro and was the featured guest solo artist at the MidAtlantic Harp Festival. Remy Johnson teaches harp privately through the ASO Talent Development Program and at several universities in the Atlanta area. She coaches the harpists of the Atlanta Symphony Youth Orchestra and is an artist affiliate at Emory University, artist in residence at Kennesaw State University, and adjunct instructor at Georgia State University. Remy Johnson is co-founder and was artistic director (2000–2010) of the Urban Youth Harp Ensemble, a program serving 55 students from several Atlanta public schools. For this work, she received Atlanta’s Channel Eleven Community Service Award and the TBS Pathfinder Award. In fall 2009, Remy Johnson was awarded the Atlanta Business Chronicle’s “Up & Comers Award,” also known as “40 under 40,” showcasing young community leaders in Atlanta.

Jessica Shuang Wu, violin As a founding member of the Vega String Quartet, quartet in residence at Emory University, Jessica Shuang Wu has performed extensively throughout North America, Asia, and Europe and has been broadcast on NPR’s Performance Today (USA), Radio France, the National Radio of China, the National Radio of the Czech Republic, and Shanghai TV. Her concert appearances include the Vega String Quartet’s critically acclaimed Lincoln Center debut and “a triumphant L. A. debut” (Los Angeles Times), along with performances at the Weill and Zankel recital halls and Issac Stern Auditorium at Carnegie Hall, Harvard Club in New York, Museum d’Orsay of Paris, Highlands Festival in North Carolina, Aspen Music festival, and La Jolla Concert Series, among many others.

Born in Shanghai, China, Wu began her violin studies at age five and made her solo debut with the Shanghai Philharmonic Orchestra at age twelve. At age nine, she joined the Shanghai Conservatory and began playing chamber music at age thirteen. In 1998, Wu and the other musicians of the Vega String Quartet won the first prize at the Coleman International Chamber Ensemble Competition and first prize at the Carmel International Chamber Music Competition. The following year, the quartet was awarded four out of six total prizes from the 1999 Bordeaux International String Quartet Competition in France, including the International Music Critics’ prize. The quartet has released a CD under Naxos Records Inc., of 20th-century American music. Wu appears regularly in chamber music concerts with many of today’s leading artists such as Richard Stoltzman, William Preucil, Sarah Chang, Robert McDuffle, Charles Wadsworth, Elliot Fisk, Christopher O’Reily, and the Eroica Trio.

Yinzi Kong, viola Violist Yinzi Kong, born and raised in Shanghai, China, is a founding member of the internationally acclaimed Vega String Quartet. Kong began her musical training at age five and gave her first public performances at seven. After moving to the United States in 1995, Kong received a bachelor’s degree from the Harid Conservatory in Florida and a master’s degree from the Manhattan School of Music. Since winning several top prizes at the Bordeaux International String Quartet Competition in France, the Carmel String Quartet Competition, and the Coleman Competition in the United States with the Vega String Quartet, Kong has enjoyed a versatile career in both solo and chamber music performance and teaching. She has performed in major concert halls all over the world, including on the stages of Carnegie Hall, and her live performances have been heard on NPR’s Performance Today (USA), the National Radio of China, Shanghai TV, Radio France, France Musiques, and the National Radio of the Czech Republic. Kong has also collaborated with some of the finest contemporary musicians including Elliot Fisk, William Preucil, David Shifrin, Richard Stoltzman, Charles Wadsworth, and Sarah Chang, among others. 7