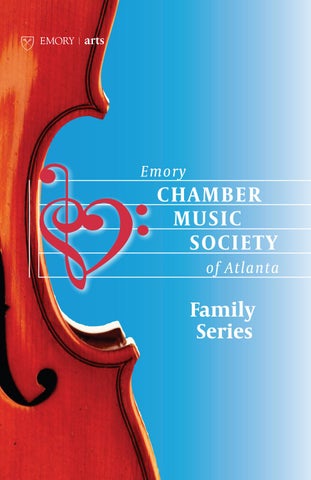 The international award-winning Vega String Quartet is on the cutting edge of the new generation of chamber music ensembles. The New York Times raved about its “playing that had a kind of clean intoxication to it, pulling the listener along . . . the musicians took real risks in their music making,” and the Los Angeles Times praised its “triumphant L.A. What does Vega mean? debut.” Based in Atlanta where The Vega star is the brightest in it is the quartet in residence at the Lyra constellation. According Emory University, the group to Greek mythology, this also tours throughout Europe, constellation represents the lyre, Asia, and North America which belonged to the legendary performing in major cities musician Orpheus. including Berlin, Brussels, Cologne, London, Mexico City, Milan, New York, Paris, Tokyo, Seoul, Shanghai, Vancouver, and Vienna. The quartet is a frequent guest at numerous music festivals including Aspen, Brevard, Mostly Mozart, Rockport, San Miguel de Allende, HighlandsCashiers, Musicorda, Kingston, and SummerFest La Jolla, among others. It has been quartet in residence at the Van Cliburn Institute and on the artist roster of Carnegie Hall’s New York City Neighborhood Concert series and Community Concerts Association roster. The quartet is also a member of Young Audiences of Atlanta, presenting educational programs throughout the public school system. 5

William Ransom, piano Pianist, artistic director, master teacher, editor, and judge for international competitions, William Ransom appears around the world as a soloist with orchestras, a recitalist, and a chamber musician. His performances have been broadcast on National Public Radio and on television in the United States, Argentina, Poland, and Japan. He regularly collaborates with musicians including Yo-Yo Ma, Richard Stoltzman, William Preucil, Stephen Isserlis, and Robert McDuffie; members of the Tokyo, Cleveland, Juilliard, American, St. Petersburg, Borromeo, Parker, Ariel, and Lark string quartets; the Empire Brass Quintet; the Eroica Trio; and the percussion group Nexus; among others. As a master teacher, he also performs and gives master classes at numerous schools of music and universities around the world. He has recorded for ACA Digital and Rising Star Records. Ransom is the Mary Emerson Professor of Piano at Emory University in Atlanta where he is founder and artistic director of the Emory Chamber Music Society of Atlanta. A graduate of the Juilliard School and the University of Michigan, Ransom spends summers as artistic director of the Highlands-Cashiers Chamber Music Festival in North Carolina and for a decade was an artistfaculty member at the Kamisaibara Pianists Camp in Japan. In 2016 he was named artistic director of the Juneau Jazz and Classics Festival and also one of Musical America Worldwide’s “30 Musical Innovators.” 7

More events coming soon to the Schwartz Center Virtual Stage schwartz.emory.edu/virtual-stage Danish String Quartet Candler Concert Series February 19, 2021 at 8 p.m. The Danish String Quartet’s playing brings a rare musical spontaneity that gives audiences the sense of hearing even treasured canon repertoire as if for the first time. The Quartet’s palpable joy in performing has made the ensemble in-demand on concert stages worldwide.

ECMSA: Plus One February 27, 2021 at 8 p.m. Enjoy the Vega String Quartet with guest first violin David Coucheron plus one additional musician for Mendelssohn’s delightful Viola Quintet in B-flat with Paul Murphy and Dohnányi’s powerful and dramatic Piano Quintet in C Minor with William Ransom.

Emory Wind Ensemble February 28, 2021 at 4 p.m. This semester the Emory Wind Ensemble has formed two chamber ensembles: the Chamber Winds (a harmoniemusik-inspired dectet plus string bass), which will perform at 4 p.m., and a Brass Choir that will take the stage at 5:15 p.m. This first concert of the year will feature select movements from Arthur Bird’s Serenade, op. 40, and Eric Ewazen’s Fanfarria Castellana. 9