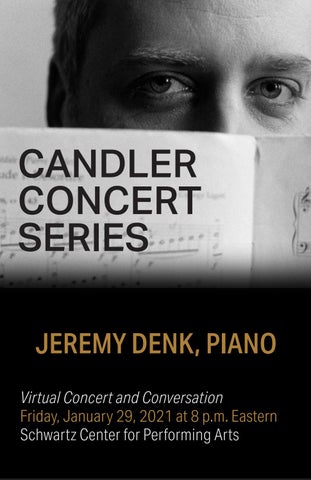 Photographs and Recordings Digital capture or recording of this concert is not permitted. Event and Program Information Available online at schwartz.emory.edu Cover Design By Nick Surbey Jeremy Denk Photo (opposite) By Shervin Lainez Acknowledgment Eternal thanks to Donna and Marvin Schwartz for their many contributions.

Program Note Yes, Bach’s preludes and fugues are miracles of construction and lessons in composition and keyboard playing. But I’d like to look at them from the point of view of a storyteller. How does Bach define a character? Then how and why does he let the character change? Great storytellers want the character to be altered, but not in a predictable way. They want to create contradictions and unpack ambiguities within what seem to be straightforward ideas (happiness, love, grief). Bach’s way of writing evokes the virtues of stories: not just drama (and there’s plenty of that), not just the motion of the plot, but empathy—we care what happens to these characters; so almost without knowing it, we gain access to a communal understanding. —Jeremy Denk

Jeremy Denk (photo by Michael Wilson) Jeremy Denk is one of America’s foremost pianists. Winner of a MacArthur “Genius” Fellowship and the Avery Fisher Prize, Denk was recently elected to the American Academy of Arts and Sciences. Denk returns frequently to Carnegie Hall and in recent seasons has appeared with the Chicago Symphony, New York Philharmonic, Los Angeles Philharmonic, San Francisco Symphony, and Cleveland Orchestra, as well as appearing on tour with Academy of St Martin in the Fields, and at the Royal Albert Hall as part of the BBC Proms. In 2019–2020, until the COVID-19 pandemic led to the shutdown of all performances, Denk toured Bach’s Well-Tempered Clavier, Book I extensively, and was to have performances culminate with Lincoln Center in New York and the Barbican in London. He returned to Carnegie Hall to perform Beethoven’s Choral Fantasy with the Orchestra of St. Luke’s, and made his solo debut at the Royal Festival Hall with the London Philharmonic performing Beethoven’s Piano Concerto No. 4. He also made his solo recital debut at the Boulez Saal in Berlin performing 6

works by Bach, Ligeti, Berg, and Schumann, and returned to the Piano aux Jacobins Festival in France, as well as London’s Wigmore Hall. Further performances abroad included his debut with the Bournemouth Symphony, his returns to the City of Birmingham Symphony and the Piano Espoo Festival in Finland, and recitals of the complete Ives Violin Sonatas with Stefan Jackiw. Highlights of the previous season included a three-week recital tour, culminating in Denk’s return to Carnegie Hall; play-directing Mozart Concerti on an extensive tour with Academy of St Martin in the Fields; and a nationwide trio tour with Joshua Bell and Steven Isserlis. He also performed and curated a series of Mozart Violin Sonatas (“Denk &amp; Friends”) at Carnegie Hall. Denk is also known for his original and insightful writing on music, which Alex Ross praises for its “arresting sensitivity and wit.” He wrote the libretto for a comic opera presented by Carnegie Hall, Cal Performances, and the Aspen Festival, and his writing has appeared in the New Yorker, the New Republic, the Guardian, and on the front page of the New York Times Book Review. One of his New Yorker contributions, “Every Good Boy Does Fine,” forms the basis of a book for future publication by Random House in the United States and Macmillan in the UK. Denk’s recording of the Goldberg Variations for Nonesuch Records reached number one on the Billboard Classical Charts. His recording of Beethoven’s Piano Sonata No. 32 in C Minor, op. 111 paired with Ligeti’s Études was named one of the best discs of the year by the New Yorker, NPR, and the Washington Post, and his account of the Beethoven sonata was selected by BBC Radio 3’s Building a Library as the best available version recorded on modern piano. Denk has a long-standing attachment to the music of American visionary Charles Ives, and his recording of Ives’s two piano sonatas also featured in many “best-of-the-year” lists. His recording c.1300–c.2000 was released in 2018 with music ranging from Guillaume de Machaut, Gilles Binchois, and Carlo Gesualdo, to Stockhausen, Ligeti, and Glass. Denk graduated from Oberlin College, Indiana University, and the Juilliard School. He lives in New York City, and his web site and blog are at jeremydenk.net.

Jazz Fest 2021 Schwartz Artist-in-Residence Event February 12–13, 2021 In this virtual event, jazz guitarist Bobby Broom joins Kenny Davis on bass and Gary Motley on piano to kick off a celebration of jazz at Emory. Jazz Fest 2021 is a Schwartz Artist-in-Residence program featuring the trio in concert at 8 p.m. on Friday and a discussion/master class with Broom at 11:30 a.m. on Saturday.

ECMSA: Valentine’s Day Concert— Music of Love February 14, 2021 at 4 p.m. What better way to celebrate Valentine’s Day than with music of love? Amy Beach’s Romance for violin; Romances by Robert and Clara Schumann; Brahms’s Intermezzo in A Major; and Dohnanyi’s Romanza for String Trio are performed by members of the Vega String Quartet and William Ransom, piano. 9

CANDLER CONCERT SERIES The Flora Glenn Candler Concert Series brings internationally-renowned artists to Emory University&#39;s Schwartz Center for Performing Artsâ&amp;#x20AC;&amp;#x201D;to the Emerson Concert Hall or the online virtual stage. The artists come from a variety of musical genres including traditional classical ensembles, such as the Royal Philharmonic Orchestra and contemporary artists, like Kronos Quartet. The series is made possible by a generous gift from the late Flora Glenn Candler, a friend and patron of music at Emory University. 10 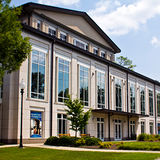