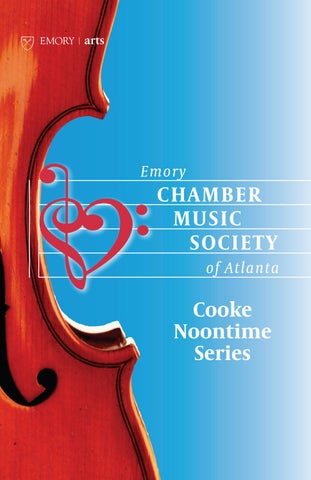 The Emory Chamber Music Society of Atlanta is supported by the Cherry L. Emerson Endowment, the Rebecca Katz-Doft Chamber Music Endowment, the Ethel Orentlicher Gershon Fund, a generous gift from Dr. John and Linda Cooke, the Office of Educational Programs at the Michael C. Carlos Museum, the Friends of Music at Emory, and by ongoing donations from music lovers like you.

The international award-winning Vega String Quartet is on the cutting edge of the new generation of chamber music ensembles. The New York Times raved about its “playing that had a kind of clean intoxication to it, pulling the listener along . . . the musicians took real risks in their music making,” and the Los Angeles Times praised its “triumphant L.A. debut.” Based in Atlanta where it is the quartet in residence at Emory University, the group also tours throughout Europe, Asia, and North America performing in major cities including Berlin, Brussels, Cologne, London, Mexico City, 4

Milan, New York, Paris, Tokyo, Seoul, Shanghai, Vancouver, and Vienna. The quartet is a frequent guest at numerous music festivals including Aspen, Brevard, Mostly Mozart, Rockport, San Miguel de Allende, HighlandsCashiers, Musicorda, Kingston, and SummerFest La Jolla, among others. It has been quartet in residence at the Van Cliburn Institute and on the artist roster of Carnegie Hall’s New York City Neighborhood Concert series and Community Concerts Association roster. The quartet is The Vega star is also a member of Young Audiences the brightest in the of Atlanta, presenting educational programs throughout the public Lyra constellation. school system. According to The quartet’s live broadcast Greek mythology, credits include NPR’s Performance this constellation Today, the National Radio of China, Shanghai TV, Radio France, France represents the lyre, Musiques, German Radio, and the which belonged National Radio of the Czech Republic. to the legendary The quartet captured four of the top six prizes at the Bordeaux String musician Orpheus. Quartet Competition (including the international music critics’ prize), as well as top prizes at the Coleman Chamber Ensemble Competition, the Carmel Chamber Music Competition, and the National Society of Arts and Letters String Quartet Competition.

What does Vega mean?

David Coucheron joined the Atlanta Symphony Orchestra as concertmaster in September 2010. At the time, he was the youngest concertmaster among any major United States orchestra. Throughout his career, Coucheron has worked with conductors Robert Spano, Michael Tilson Thomas, Simon Rattle, Mstislav Rostropovich, and Charles Dutoit, among others. He has performed as soloist with the BBC Symphony, Bergen Philharmonic, Sendai Symphony, Oslo Philharmonic, and the Trondheim Symphony Orchestra. Coucheron has given solo recitals at Carnegie Hall, Wigmore Hall, the Kennedy Center, and the XIX Olympic Winter Games (Salt Lake City), as well as in Beograd, Chile, China, Hong Kong, Japan, Serbia, Singapore, and 5

Shanghai. His chamber music performances have included appearances at Suntory Hall as well as Wigmore Hall and Alice Tully Hall. Coucheron serves as the artistic director for the Kon Tiki Chamber Music Festival in his hometown of Oslo, Norway. He is also on the artist-faculty for the Aspen Music Festival and Brevard Music Festival. An active recording artist, recordings with sister and pianist Julie Coucheron include David and Julie (Naxos/Mudi) and Debut (Naxos). He is also the featured soloist on the Atlanta Symphony’s recording of Vaughan Williams’s The Lark Ascending, which was released on ASO Media in 2014. Coucheron began playing the violin at age three. He has a bachelor’s degree in music from the Curtis Institute of Music, a master’s degree in music from the Juilliard School, and a master’s degree in musical performance from the Guildhall School of Music and Drama in London, studying with teachers including Igor Ozim, Aaron Rosand, Lewis Kaplan, and David Takeno. Coucheron plays a 1725 Stradivarius, on kind loan from the Anders Sveaas Charitable Trust.

Pianist, artistic director, master teacher, editor, and judge for international competitions, William Ransom appears around the world as a soloist with orchestras, a recitalist, and a chamber musician. His performances have been broadcast on National Public Radio and on television in the United States, Argentina, Poland, and Japan. He regularly collaborates with musicians including Yo-Yo Ma, Richard Stoltzman, William Preucil, Stephen Isserlis, and Robert McDuffie; members of the Tokyo, Cleveland, Juilliard, American, St. Petersburg, Borromeo, Parker, Ariel, and Lark string quartets; the Empire Brass Quintet; the Eroica Trio; and the percussion group Nexus; among others. As a master teacher, he also performs and gives master classes at numerous schools of music and universities around the world. He has recorded for ACA Digital and Rising Star Records. Ransom is the Mary Emerson Professor of Piano at Emory University in Atlanta where he is founder and artistic director of the Emory Chamber Music Society of Atlanta. A graduate of the Juilliard School and the University of Michigan, Ransom spends summers as artistic director of the Highlands-Cashiers Chamber Music Festival in North Carolina and for a decade was an artistfaculty member at the Kamisaibara Pianists Camp in Japan. In 2016 he was named artistic director of the Juneau Jazz and Classics Festival and also one of Musical America Worldwide’s “30 Musical Innovators.”

Now celebrating its 28th season of excellence, the Southeast’s largest and most active chamber music organization brings together some of the city’s finest resident musicians with internationally known guest artists who are dedicated to performing the most delightful, exciting, and interesting music from the chamber repertoire in some of the most acoustically and visually beautiful spaces in Atlanta. Guests have included Yo-Yo Ma, Richard Stoltzman, Alan Gilbert, Dave Brubeck, William Preucil, Eliot Fisk, Robert Spano, and many others. The mission of the Chamber Music Society (ECMSA) is to create new generations of passionate and educated music lovers who will cherish and support this great art forever. In addition to presenting an Emerson Series, a Family Series, and the Cooke Noontime Concert Series at Emory, the ECMSA tours, participates in recording projects, commissions new works, and supports numerous community outreach activities. Education is an integral part of the ECMSA’s mission, and members teach in a wide variety of ways throughout the university and greater community, coach student chamber music ensembles, and give private lessons. Emory’s String Quartet in Residence program, held by the internationally acclaimed Vega String Quartet, lies at the heart of the ECMSA’s mission to spread this great music throughout the Atlanta community, reaching audiences of all ages. The Vega is the first professional string quartet to ever make Atlanta its home base, and as such, it is transforming music education and performance throughout the area. Until further notice, all ECMSA concerts will be presented online only. Concerts remain free of charge, but donations are greatly appreciated. William Ransom, artistic director wransom@emory.edu/404.727.6443 7