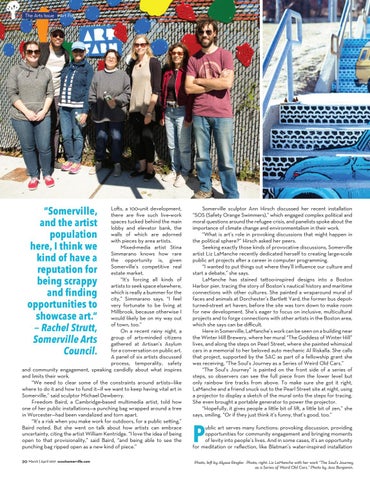 “Somerville, and the artist population here, I think we kind of have a reputation for being scrappy and finding opportunities to showcase art.” — Rachel Strutt, Somerville Arts Council.

Lofts, a 100-unit development, there are five such live-work spaces tucked behind the main lobby and elevator bank, the walls of which are adorned with pieces by area artists. Mixed-media artist Stina Simmarano knows how rare the opportunity is, given Somerville’s competitive real estate market. “It’s forcing all kinds of artists to seek space elsewhere, which is really a bummer for the city,” Simmarano says. “I feel very fortunate to be living at Millbrook, because otherwise I would likely be on my way out of town, too.” On a recent rainy night, a group of arts-minded citizens gathered at Artisan’s Asylum for a conversation on public art. A panel of six artists discussed process, temporality, safety and community engagement, speaking candidly about what inspires and limits their work. “We need to clear some of the constraints around artists—like where to do it and how to fund it—if we want to keep having vital art in Somerville,” said sculptor Michael Dewberry. Freedom Baird, a Cambridge-based multimedia artist, told how one of her public installations—a punching bag wrapped around a tree in Worcester—had been vandalized and torn apart. “It’s a risk when you make work for outdoors, for a public setting,” Baird noted. But she went on talk about how artists can embrace uncertainty, citing the artist William Kentridge. “I love the idea of being open to that provisionality,” said Baird, “and being able to see the punching bag ripped open as a new kind of piece.” 20 March | April 2017

Somerville sculptor Ann Hirsch discussed her recent installation “SOS (Safety Orange Swimmers),” which engaged complex political and moral questions around the refugee crisis, and panelists spoke about the importance of climate change and environmentalism in their work. “What is art’s role in provoking discussions that might happen in the political sphere?” Hirsch asked her peers. Seeking exactly those kinds of provocative discussions, Somerville artist Liz LaManche recently dedicated herself to creating large-scale public art projects after a career in computer programming. “I wanted to put things out where they’ll influence our culture and start a debate,” she says. LaManche has stained tattoo-inspired designs into a Boston Harbor pier, tracing the story of Boston’s nautical history and maritime connections with other cultures. She painted a wraparound mural of faces and animals at Dorchester’s Bartlett Yard, the former bus depotturned-street art haven, before the site was torn down to make room for new development. She’s eager to focus on inclusive, multicultural projects and to forge connections with other artists in the Boston area, which she says can be difficult. Here in Somerville, LaManche’s work can be seen on a building near the Winter Hill Brewery, where her mural “The Goddess of Winter Hill” lives, and along the steps on Pearl Street, where she painted whimsical cars in a memorial to her beloved auto mechanic Al Riskalla. She calls that project, supported by the SAC as part of a fellowship grant she was receiving, “The Soul’s Journey as a Series of Weird Old Cars.” “The Soul’s Journey” is painted on the front side of a series of steps, so observers can see the full piece from the lower level but only rainbow tire tracks from above. To make sure she got it right, LaManche and a friend snuck out to the Pearl Street site at night, using a projector to display a sketch of the mural onto the steps for tracing. She even brought a portable generator to power the projector. “Hopefully, it gives people a little bit of lift, a little bit of zen,” she says, smiling. “Or if they just think it’s funny, that’s good, too.”

ublic art serves many functions: provoking discussion, providing opportunities for community engagement and bringing moments of levity into people’s lives. And in some cases, it’s an opportunity for meditation or reflection, like Blatman’s water-inspired installation Photo, left by Alyssa Ringler. Photo, right: Liz LaManche with her work “The Soul’s Journey as a Series of Weird Old Cars.” Photo by Jess Benjamin. 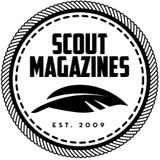 There’s art for all in the March/April issue of Scout! We take you on a tour of Somerville homes that are more like museums before they open...

There’s art for all in the March/April issue of Scout! We take you on a tour of Somerville homes that are more like museums before they open...