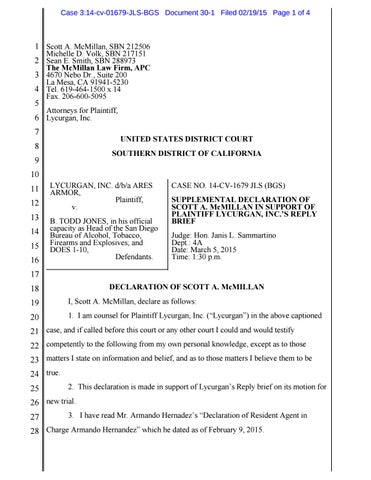 LYCURGAN, INC. d/b/a ARES ARMOR, Plaintiff, v. B. TODD JONES, in his official capacity as Head of the San Diego Bureau of Alcohol, Tobacco, Firearms and Explosives; and DOES 1-10, Defendants.

17 DECLARATION OF SCOTT A. McMILLAN

I, Scott A. McMillan, declare as follows:

1. I am counsel for Plaintiff Lycurgan, Inc. (“Lycurgan”) in the above captioned

21 case, and if called before this court or any other court I could and would testify 22 competently to the following from my own personal knowledge, except as to those 23 matters I state on information and belief, and as to those matters I believe them to be 24 true. 25

2. This declaration is made in support of Lycurgan’s Reply brief on its motion for

3. I have read Mr. Armando Hernadez’s “Declaration of Resident Agent in

4. That 18 units of the seized items were missing was an unexpected surprise on

5. With respect to Mr. Hernandez’s comments at paragraph 4:

“4. On December 22, 2014, ATF retrieved all the EP80 firearms boxes from storage for transport to the ATF Carlsbad field office to facilitate the return of the seized property to Ares Armor. There was no indication that the storage facility had been breached or that any of the original boxes containing the seized firearms had been opened.”

I perplexed at why Mr. Hernandez would make such a statement under penalty of

8 perjury. On December 23, 2014, Mr. Hernandez was present during various times when 9 the contents of the boxes were being counted. It is my recollection, and based on that I 10 believe that Mr. Hernandez personally instructed that the two boxes that had been placed 11 in the van be returned to have the contents counted. Although he appears to deny that 12 any boxes were previously opened, I pointed out that several appeared to have been 13 tampered with. Nobody argued with me and my observations. To the extent that Mr. 14 Hernadez purports some level of certainty in his declaration that none of the contents of 15 the boxes had been taken as souvenirs or otherwise pilfered, Mr. Hernandez didn’t seem 16 so confident when the contents of the boxes were being counted and coming up short. 17 Alternatively, perhaps Mr. Hernadez is stating that on December 22, 2014, the boxes 18 appeared to be intact. Does he suggest that something may have happened between 19 December 22nd and December 23rd which resulted in the “loss” of 18 items which Mr. 20 Hernandez himself declares to be “firearms”? Based on what I perceived at the ATF 21 facility, Mr. Hernandez’s animosity towards my client and I was tempered as the day 22 wore on by his obvious concern as the count of the missing unfinished polymer receivers 23 increased. 24

25 and re-sealed. It was missing two units. As I explained above, other boxes appeared 26 tampered with as well. 27

6. Fortunately, Mr. Hernandez or a colleague, had the foresight to arrange for the

1 special metal plates attached to the wall where unfortunate captives could be attached by 2 shackle to the wall. The interrogation room also had a camera. Thus, it is simple to 3 determine the state of the boxes: watch the video. 4

7. It was plain that many of the ATF agents at the Carlsbad office considered

5 Dimitri Karras and I their enemy. With herniated disks in my lower back and 6 degenerative disk disease in my neck, holding certain positions for me is very painful. 7 Because counting nearly 6,000 of the unfinished lower receivers took such a long time, I 8 had to hold positions bent over. After just a few hours my back was very sore. I did not 9 anticipate a unit by unit count. Although I requested some aspirin or ibuprofen, the 10 agents refused. They would not even provide us water. 11

8. That being said, the agents that were verifying the count were not unfriendly.

12 Indeed, as the hours stretched on a camaraderie of sorts grew between us. Mr. Karras 13 counted with one agent and I with another. When there was a discrepancy on a count, 14 we’d recount the entire box. 15

9. After we were done counting, I waited for more than 15 minutes for my

16 copies. Whilst I waited the copies of the receipt, two agents, my size, and very serious 17 expressions waited out in the hall with me. I recall that at times they stood on either side 18 of me, feet spread at shoulder length, slightly turned, as if ready to engage in a fight or a 19 “takedown.” It is unclear whether they were simply trying to intimidate me, or were 20 awaiting word that I was subject to arrest for signing for the receipt of 5786 unfinished 21 polymer receivers – in which case I’d be thrown down and roughly handcuffed. I 22 suspect the latter. At some point, and it must have been twenty minutes later, an agent 23 appeared with my copy of the three page document that I had requested a copy of. 24 / / / 25 / / / 26 / / / 27 28

10. Thus, in light of my personal experiences with the Carlsbad ATF office and

2 what I observed, I believe that ATF agents took the missing unfinished lower receivers 3 as what they perceive as “war booty.” As the ATF agents as a group had already 4 internally dehumanized my client and his company, stealing Lycurgan’s property was no 5 different than vandalizing the premises at National City. Although the agents were 6 sworn to uphold the law, they found neither act particularly morally repugnant, and both 7 in some way gratifying. Although the damaged store cannot be unvandalized, certainly 8 the “war booty” can and should be returned. 9

I declare under the penalty of perjury according to the laws of the United States,

10 that the foregoing is true and correct and that this declaration was signed on February 19, 11 2015, in the City of La Mesa, the County of San Diego, California. 12 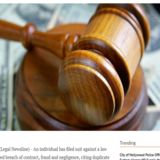