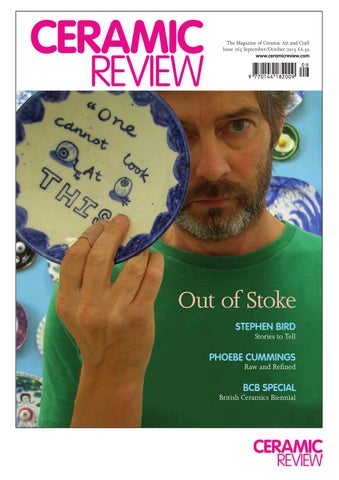 Out of Stoke sTEPHEN bIRD Stories to Tell September/October 2013

Sometimes disturbing, often complex, and always richly layered with imagery, Stephen Bird’s plates and platter forms depict allegorical tales, contemporary world events, and personal histories, juxtaposed in unnerving and unexpected ways. Seemingly dreamlike, these painted surfaces are vehicles for Bird’s satirical take on life events – both his own and those of the contemporary societies he encounters. However, unlike much satirical work that can often seem relentlessly harsh and somehow detached, Bird slightly softens any severity in a sensitive and emotive way, by introducing both humour and images of his own self and those he is close to. The longer you look, the more you begin to understand the essence of Bird’s work; meanings, messages, and commentaries reveal themselves slowly and implicitly. Working as he does, across several disciplines, has enriched and enlivened Bird’s creative process. An accomplished painter, he brings those skills to his ceramic making – his plates and platters show a precise, considered use of composition; making use of the whole

area, as one would a canvas, he sometimes defines the edge of the forms with symbols, seeking to hold and frame the image. Possessing a masterly use of colour and mark making (carried out in an almost intuitive way) together with a thorough understanding of the qualities of ceramic stains and glazes, enables him to produce surfaces that have great depth and intensity – reflecting the depth and intensity of his imagery and subject matter. Artists whose work spans several fields are often the most interesting – cross-fertilisation seems to engender original thought and form. Bird is no exception to this; his work is always absorbing. There is a commonality of theme and concept visible, whether one is viewing his paintings, platters, or sculptures, and because he exploits each medium so fully – making each one his own – the work seems utterly integrated. In anticipation of his solo exhibition, My Dad Was Born On The Moon, at The Scottish Gallery in Edinburgh, I asked Stephen to speak about his recent work and his ways of working.

ANNIE WOODFORD You spent your early childhood in Stoke-onTrent. Would you say that living there in your formative years made it more likely that you would eventually make ceramic work? STEPHEN BIRD There was always a mysterious element attached to clay when I was growing up. Although I was surrounded by finished ceramics, I never saw or touched any clay as a child. Pottery in Stoke-On-Trent was done by adults, behind closed doors in factories, and in a rigidly predetermined way. I think this added to the mystique that surrounded clay. It seemed to be taboo to actually make your own pottery. I think that this, and having not studied ceramics at art college, meant that when I began making ceramics in 1996, I felt like I was trespassing on unauthorised terrain â&amp;#x20AC;&amp;#x201C; and I found that very stimulating.

AW The title for of your exhibition intrigues me, what is its significance? SB My Dad was actually born in Chinchilla, outback Queensland. As a child in the UK, looking through an atlas, I soon realised that it was so far away, mysterious, and so unreachable that it may as well have been the moon. This then became the working title of a project I have been working on since last October, and involved interviewing certain Australian relatives to find out more about

their lives on an outback sawmill and tales of migration and separation. In February this year I travelled with artist Neil Irons and musician Paul Smith, and we filmed and painted on location where these events took place. Then, with this imagery as a starting point I set out to mythologise these domestic stories and synthesise them into tangible objects. The total project included sixty ceramics, the paintings made during the trip, and a film documenting the project. The project was funded by the Australia Council through a New Work Grant.

AW Do you regard yourself as a multi-disciplinary artist rather than a ceramic artist, where theme and subject matter are much more important than the actual disciplines themselves? SB I still see myself as a painter first, but painting has taken me to places I never expected to be, and ceramics is one of them. I approach each medium with the only method I know: looking, drawing, adjusting, looking, over and over until something begins to happen which is beyond words or even rational thinking. I think theme, subject matter, concept, and the technique have to be kept in equilibrium. AW Can you tell me about the themes and narrative contents of some individual plates?

SB You are a Waste of Space This plate is a combination of a drawing of a diamond fire tail finch I made on our trip to the outback with an extract of the interview with my aunty. My original sketch for the plate had a drawing of my aunty but the anthropomorphic approach is much more moving! Our Daily Bread After perfecting the chrome and copper green poisonous glaze I decided it would be perfect applied to a toxic bread plate. Remorse This is one of a long-running series of blue and white plates that depicted tales of misogyny. They were all very graphic and contained parts of stories from William Tell/William Burroughs and King Lear/Oedipus Rex â&amp;#x20AC;&amp;#x201C; all used for their symbolic visual metaphors. When I started I had no idea where this was going, and at one stage my partner became quite concerned. In this plate the man has pulled his eyeballs from their sockets and they stare up at him from the palms of his hands. At last he has the first glimmer of insight into his reckless past.

AW Do you consider that working across disciplines enriches each field and that therefore ideas develop in a more meaningful way? SB Yes, I think that’s a very good way to explain it. Each medium has its own limitations but can be expanded by what you bring from another area in terms of skills, knowledge, and enthusiasm, or even naivety. AW Do you find the plate form, its scale and shape, restricting or liberating? SB Making a plate can be liberating as I can make a canvas any

shape. The restriction comes in the limitation of the size you can make and fire a plate.

www.scottish-gallery.co.uk Annie Woodford studied Ceramics and Glass at the Royal College of Art, London. Working internationally and from her studio in Edinburgh, Annie Woodford works in several fields including ceramics, painting, and printmaking

AW You trained as a painter, how do you think that has affected the way you use composition, perspective, and colour when you are creating the plates? SB I had a very formal training as a painter and that has always remained with me. I draw every day as a way of enjoying the world in which I live, and if I get too caught up with ideas, I always like to remind myself that it’s all just illusions of still lives, figures, and landscape. AW You sometimes apply modelled forms to the surface of the plates. Is this an attempt to take the 2D image into the realm of the 3D object, or perhaps the interface between the two dimensions? SB My work has always existed in an area where 2D and 3D collide.