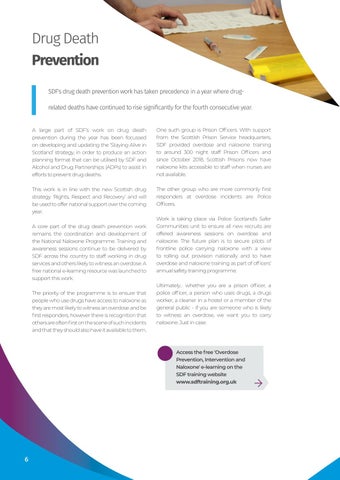 Drug Death Prevention SDF&#39;s drug death prevention work has taken precedence in a year where drugrelated deaths have continued to rise significantly for the fourth consecutive year. A large part of SDF’s work on drug death prevention during the year has been focussed on developing and updating the ‘Staying Alive in Scotland’ strategy, in order to produce an action planning format that can be utilised by SDF and Alcohol and Drug Partnerships (ADPs) to assist in efforts to prevent drug deaths.

This work is in line with the new Scottish drug strategy ‘Rights, Respect and Recovery’ and will be used to offer national support over the coming year.

The other group who are more commonly first responders at overdose incidents are Police Officers.

A core part of the drug death prevention work remains the coordination and development of the National Naloxone Programme. Training and awareness sessions continue to be delivered by SDF across the country to staff working in drug services and others likely to witness an overdose. A free national e-learning resource was launched to support this work. The priority of the programme is to ensure that people who use drugs have access to naloxone as they are most likely to witness an overdose and be first responders, however there is recognition that others are often first on the scene of such incidents and that they should also have it available to them.

Work is taking place via Police Scotland&#39;s Safer Communities unit to ensure all new recruits are offered awareness sessions on overdose and naloxone. The future plan is to secure pilots of frontline police carrying naloxone with a view to rolling out provision nationally and to have overdose and naloxone training as part of officers&#39; annual safety training programme. Ultimately… whether you are a prison officer, a police officer, a person who uses drugs, a drugs worker, a cleaner in a hostel or a member of the general public - if you are someone who is likely to witness an overdose, we want you to carry naloxone. Just in case.

Scottish Drugs Forum are delighted to share with you our Annual Review for 2018/19, which includes various examples of the work that our teams have carried out over the past year. The review includes reports from SDF’s Chair, Jim Stephen, and CEO, David Liddell, as well as highlights from a variety of SDF work streams. You can explore our work in drug death prevention; peer involvement and volunteering; improving service quality; training; harm reduction, sexual health and blood borne viruses; the new drug strategy and much more. This year, we have chosen to shine a spotlight on the work of the award-winning Addiction Worker Training Project (AWTP) – our employability programme that trains, supports and pays people with a history of drug or alcohol problems through a nine-month course, which prepares them for a career working within the health and social care field. We’re proud of the variety of expertise we have at SDF and encourage stakeholders to engage with us if any of the projects you read about t 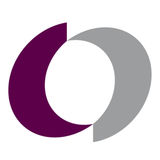