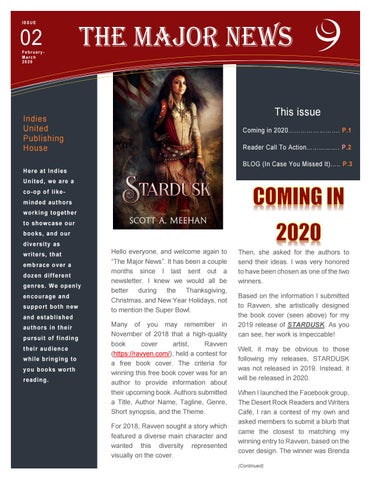 The Major News This issue

Hello everyone, and welcome again to “The Major News”. It has been a couple months since I last sent out a newsletter. I knew we would all be better during the Thanksgiving, Christmas, and New Year Holidays, not to mention the Super Bowl.

Many of you may remember in November of 2018 that a high-quality book cover artist, Ravven (https://ravven.com/), held a contest for a free book cover. The criteria for winning this free book cover was for an author to provide information about their upcoming book. Authors submitted a Title, Author Name, Tagline, Genre, Short synopsis, and the Theme. For 2018, Ravven sought a story which featured a diverse main character and wanted this diversity represented visually on the cover.

Then, she asked for the authors to send their ideas. I was very honored to have been chosen as one of the two winners. Based on the information I submitted to Ravven, she artistically designed the book cover (seen above) for my 2019 release of STARDUSK. As you can see, her work is impeccable! Well, it may be obvious to those following my releases, STARDUSK was not released in 2019. Instead, it will be released in 2020. When I launched the Facebook group, The Desert Rock Readers and Writers Café, I ran a contest of my own and asked members to submit a blurb that came the closest to matching my winning entry to Ravven, based on the cover design. The winner was Brenda (Continued)

The 21st Century Pulps was released on December 15th, 2019. The Term, “Pulp Fiction” originated from the magazines of the first half of the 20th century. Stories were printed on cheap "pulp" paper and provided “escape” for fiction fans of that time. The pulp fiction era provided influential talent and freedom that focused on detective, mystery and science fiction genres.

Hawks. She received some prizes and the right to open one of the chapters in the book.

Call To Action For 2020, I have extended the fun with a call to action for readers and writers. I am now taking open submissions from any of you who wish to add their creative writing within the content of Stardusk. Although Stardusk is a native American from the Iroquois tribe who has become a scout for George Washington during the French and Indian War, she is truly an egnima. For exanple, her fighting skills have never been seen before by any of Washington’s men…in this world. This fact alone leaves room for not only adding substance to a historical fiction story, but could also allow some of you to use your imagination for a story involving time travel. So, you see? There can be a lot of fun with this one. And yes, I did check with Ravven as a courtesy to make sure she did not mind a Sci-Fi fantasy, time travel, or paranormal twist to the historical fiction theme.

BLOG As I journeyed through the path of life, I laid down to sleep; and as I slept, I had a dream. It began with a smoldering village set within a silhouette of rolling hills. Smoke rose in several columns into the light-gray, dusk sky. A dirt road curved through the crevasses leading up to the raging community. I looked and saw a hideous beast of a man-like figure appear, standing next to his pale warhorse, which was wearing a leather mask to cover its muzzle. The man-brute dressed in heavy metal armor was physically distinguishable from any human by his mere height alone. Standing tall at nearly eight feet, he had long, hair-like appendages dangling from his silver, earth-stained helmet, which held two horns, much like a Viking. Holding a double-headed battle axe, his face looked reptilian and featured an arthropod-like flared jawbone to go along with its flat nose. Its eyes, black and deep, like two large holes, were surrounded by quills that sprang from its cheeks. At first, the creature seemed pleased in a distorted kind of way, one that finds satisfaction in

death and destruction. A smaller version of the fiend appeared, like a servant, ready to help its master mount the towering horse. Just as the man-beast turned to mount his stallion, I saw a slow moving gray donkey appear on the dirt road, walking towards the smoldering village. The beast of burden carried a man—definitely a human—who was riding along in a flowing white robe. I could not see his face because he appeared from behind me. I noticed his thick long hair was matted and draped over his shoulders.

Behind him, a human soldier draped sideways across the Donkey’s back, his face—lifeless—displaying battle scars. He looked injured or perhaps even dead. The man in white never ht t p s: / / w w w . f a c e b o o k. c o m looked back as the ass continued to move towards the village. I was deeply moved by his presence and wanted to reach out to / gr o u p s/ s a m e e h a n/ him.

The two creatures watched the rider disappear behind a hill and then I heard the large beast speak. Looking at the smaller one, he growled, “Curses! I have been defeated. And I will always be defeated…because of him!” as he pointed towards the human riding towards the decimated hamlet. I watched as the monster shoved his servant aside to climb his horse. Then, he spewed out his final words with a vengeance, “But nonetheless, I will be relentless!”

faded to darkness and

the image was no more. www.scottameehan.com

This Month’s Q&A Tips – Submit your questions. Q: A:

My Review: D-Day Girls covered a lot of previous classified ground in an 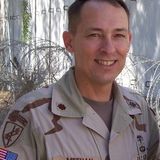