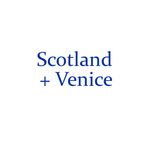 Scotland + Venice 2014 project ‘Past + Future’ brings a positive reflection on Modernity in Scottish architecture to an international audience. During a month-long residency linked to the British Pavilion in Venice starting 26 September, and under the direction of award-winning Scottish practice Reiach and Hall, research from several case studies will be presented in a series of specially-produced newspapers. The Scottish project is being supported by a partnership between the Scottish Government, Creative Scotland and the British Council, with support by Architecture and Design Scotland (A+DS).