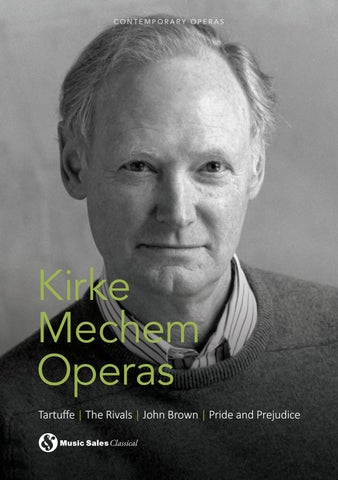 ‘Any opera company that has not yet produced ‘‘Tartuffe’’ is cheating its subscribers. They can’t know how delightful American opera can be.’ Irene Dalis, founder, Opera San Jose

Kirke Mechem is a prolific composer with a catalog of over 250 works. Born and raised in Kansas and educated at Stanford and Harvard Universities, Mechem conducted and taught at Stanford, and served as composer-inresidence at the University of San Francisco. Mechem lived three years in Vienna where he came to the attention of Josef Krips, who later championed the composer’s symphonies as conductor of the San Francisco Symphony. He was guest of honor at the 1990 Tchaikovsky Competition in Moscow and was invited back for an all-Mechem symphonic concert by the USSR Radio-Television Orchestra in 1991. His operas earned him a lifetime achievement award from the National Opera Association. In 2012 the University of Kansas awarded him its first honorary degree of Doctor of Arts. His opera Tartuffe has been performed over 400 times in six countries. Mechem’s book Believe Your Ears: Life of a Lyric Composer won the 2016 Deems Taylor Award for outstanding musical biography.

Tartuffe An opera in three acts

Tartuffe An opera in three acts (1980) Libretto in English by Kirke Mechem, German translation by Thomas Martin. Based on the play by Molière. Duration

Synopsis Tartuffe, a religious hypocrite, insinuates his way into Orgon’s house and tries to marry his daughter. Orgon’s wife, Elmire, sees through Tartuffe and plots to trick him into seducing her in order to open Orgon’s eyes. Tartuffe, however, takes control of the house and wants to get the owner arrested. Members of the family disguise themselves as officials of the crown and drive Tartuffe away. Tartuffe premiered on May 27, 1980, at the San Francisco Opera. It has since seen over 400 performances in six countries and has been translated into German, Russian, Chinese, Japanese and Czech. A “number opera” with arias, duets, trios and ensembles, Tartuffe is one of the most performed operas by an American composer. Tartuffe’s 40th anniversary will take place in 2020.

‘This opera promotes itself; it sold out, and audiences loved the show. Kirke Mechem is a genius.’ Opera San Jose

‘...a brilliant jewel, a delicious hit, right on the mark... The [Tartuffe] score is inspired, handsomely suited to the purpose and wildly effective at every turn... could be sold out for weeks or months... a masterful accomplishment.’ San Francisco Chronicle

‘This correspondent has rarely heard such a witty contemporary opera, carried out with such finely honed irony... It is uproariously funny, with downright fantastic rhymes and play of words.’ Salzburger Nachrichten

(2002) Libretto in English by Kirke Mechem. Loosely based on Sheridan’s play of the same name, now set in Newport, RI circa 1900. Duration

Synopsis Rich and dashing Jack has fallen in love with the heiress Lydia, who actually wants to elope with a penniless artist and live in “charming poverty.” Jack masquerades as a poor composer named Waverley and wins her heart, but Lydia’s aunt, Mrs. Malaprop, will not hear of it. She and Jack’s father, both unaware that “Waverley” is Jack, decide that Lydia should marry the real Jack. Jack struggles with his two identities, but Lydia eventually learns the truth and rejects him. Meanwhile, Baron von Hakenbock has been carrying on a secret correspondence with “Celia,” whom he believes to be Lydia but who is really Mrs. Malaprop. All of the mismatching lovers head to the dueling field, but true love averts the duels, clears up the misunderstandings, and unites the proper pairs.

‘Buoyant melodies, supple harmonies and perky rhythms. In spirit, The Rivals harks back to Rossini and Donizetti; in sound, it weds Puccini’s generous lyricism to the dancing meters of Bernstein’s Candide... the libretto is bright and witty... the music unfailingly suits the words with elegant ensembles and sly allusions.’ New York Times

John Brown An opera in three acts (2008) Libretto in English by Kirke Mechem.

Synopsis The opera details the events leading up to and surrounding the abortive attempt by John Brown, a charismatic abolitionist, to destroy American slavery by force of arms. Brown’s story concerns issues key to the historical development of America and perhaps still central to its fate. Following an unsuccessful attack in 1859 on the US arsenal in Virginia, Brown, who had confided to Frederick Douglass that he, like Moses, was chosen by God to lead the slaves to freedom, is sentenced to execution by hanging. As the opera closes, Douglass proclaims, ‘You cannot bury him! As long as men love freedom, John Brown will never die.’

‘...marvelous both in sound and emotion... tonal and lyric, but never trite. I’m Free and Stoke the Fire are as stirring as anything Verdi ever wrote.’ Opera Today

Pride and Prejudice An opera in two acts

Pride and Prejudice An opera in two acts (2018) Libretto in English by Kirke Mechem. Based on the novel by Jane Austen. Duration

Synopsis A wealthy and single young man from London, Richard Bingley, has just moved into the Netherfield estate. At a ball he gives for his neighbors, Mrs. Bennet is overjoyed to see that Bingley is attracted to her eldest daughter, Jane. But her second daughter, the witty and independent Elizabeth, is slighted by Bingley’s even wealthier friend, the proud and aristocratic Darcy. The spirited courtship between Darcy and Elizabeth – who at first cannot abide one another – is the main story of the opera. They not only misjudge each other, but are both victims of their own pride and prejudices. Only after much sparring and indignant misunderstandings do they come to recognize their own faults and true feelings, and can forgive themselves and each other.

‘Most striking was the way in which the music coordinated with and then illuminated each character in his or her turn – a spot-on aural representation of the people and universe of the novel… consider this the Austenacious stamp of approval: we loved what we saw and heard...’ “Austenacious,” a Jane Austen Society blog

‘Irresistible... Mechem’s fresh, classical work will be a significant factor in the art’s future, and will enrich the opera fan while tempting those who might like to try opera for the first time... had the audience standing on their feet.’ The Rivals, Performing Arts Postscripts

‘Unrivaled... for a rollicking good time, this operatic adaption has few rivals among its contemporaries... The composer has done a marvelous job in both the music and libretto... charming and comic ensembles and arias of every sort... It was a treat.’ The Rivals, BWW OperaWorld.com

‘Strikingly contemporary... with its strong score and story, in the operatic repertoire... a powerful opera about the terrible stakes in the nation’s struggle over slavery. Profound and haunting, it may be as close to an American epic as anything yet written.’ John Brown, National Catholic Reporter