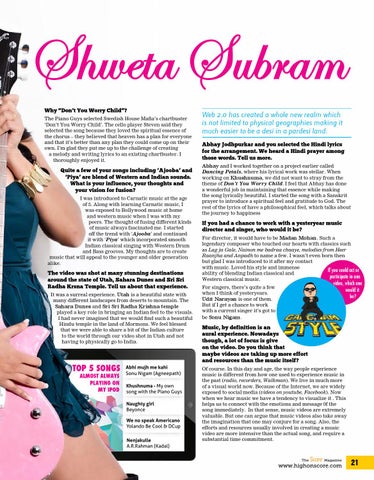 Shweta Subram Why “Don’t You Worry Child”? The Piano Guys selected Swedish House Mafia’s chartbuster ‘Don’t You Worry Child’. The cello player Steven said they selected the song because they loved the spiritual essence of the chorus – they believed that heaven has a plan for everyone and that it’s better than any plan they could come up on their own. I’m glad they put me up to the challenge of creating a melody and writing lyrics to an existing chartbuster. I thoroughly enjoyed it.

Quite a few of your songs including ‘Ajooba’ and ‘Piya’ are blend of Western and Indian sounds. What is your influence, your thoughts and your vision for fusion? I was introduced to Carnatic music at the age of 5. Along with learning Carnatic music, I was exposed to Bollywood music at home and western music when I was with my peers. The thought of fusing different kinds of music always fascinated me. I started off the trend with ‘Ajooba’ and continued it with ‘Piya’ which incorporated smooth Indian classical singing with Western Drum and Bass grooves. My thoughts are to create music that will appeal to the younger and older generation alike.

The video was shot at many stunning destinations around the state of Utah, Sahara Dunes and Sri Sri Radha Krsna Temple. Tell us about that experience. It was a surreal experience. Utah is a beautiful state with many different landscapes from deserts to mountain. The Sahara Dunes and Sri Sri Radha Krishna temple played a key role in bringing an Indian feel to the visuals. I had never imagined that we would find such a beautiful Hindu temple in the land of Mormons. We feel blessed that we were able to share a bit of the Indian culture to the world through our video shot in Utah and not having to physically go to India.

Web 2.0 has created a whole new realm which is not limited to physical geographies making it much easier to be a desi in a pardesi land. Abhay Jodhpurkar and you selected the Hindi lyrics for the arrangement. We heard a Hindi prayer among those words. Tell us more. Abhay and I worked together on a project earlier called Dancing Petals, where his lyrical work was stellar. When working on Khushnuma, we did not want to stray from the theme of Don’t You Worry Child. I feel that Abhay has done a wonderful job in maintaining that essence while making the song lyrically beautiful. I started the song with a Sanskrit prayer to introduce a spiritual feel and gratitude to God. The rest of the lyrics of have a philosophical feel, which talks about the journey to happiness

If you had a chance to work with a yesteryear music director and singer, who would it be? For director, it would have to be Madan Mohan. Such a legendary composer who touched our hearts with classics such as Lag ja Gale, Nainon me badraa chaaye, melodies from Heer Raanjha and Anpadh to name a few. I wasn’t even born then but glad I was introduced to it after my contact with music. Loved his style and immense If you could act or ability of blending Indian classical and participate in one Western classical music.

video, which one would it be?

For singers, there’s quite a few when I think of yesteryears. Udit Narayan is one of them. But if I get a chance to work with a current singer it’s got to be Sonu Nigam.

Music, by definition is an aural experience. Nowadays though, a lot of focus is give on the video. Do you think that maybe videos are taking up more effort and resources than the music itself? Of course. In this day and age, the way people experience music is different from how one used to experience music in the past (radio, recorders, Walkman). We live in much more of a visual world now. Because of the Internet, we are widely exposed to social media (videos on youtube, Facebook). Now when we hear music we have a tendency to visualize it . This helps us to connect with the emotions and message 0f the song immediately. In that sense, music videos are extremely valuable. But one can argue that music videos also take away the imagination that one may conjure for a song. Also, the efforts and resources usually involved in creating a music video are more intensive than the actual song, and require a substantial time commitment. 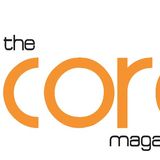