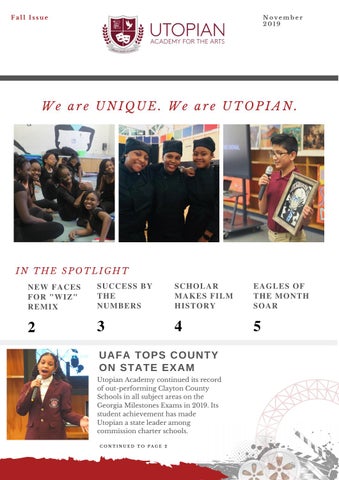 We are UNIQUE. We are UTOPIAN.

IN THE SPOTLIGHT NEW FACES

UAFA TOPS COUNTY ON STATE EXAM Utopian Academy continued its record of out-performing Clayton County Schools in all subject areas on the Georgia Milestones Exams in 2019. Its student achievement has made Utopian a state leader among commission charter schools. CONTINUED TO PAGE 2

The state standardized tests are designed to provide families and schools with information about individual student achievement and readiness for the next grade level. Students in grades 3-8 take end-of-grade assessment exams in English Language Arts and mathematics while students in grades 5 and 8 are also tested in science and social studies. Enrichment and remediation programs at Utopian Academy

helped scholars to prepare for success on the Milestones Exams. Those who needed extra support in math, reading, and language arts took advantage of extra study hours built into the weekly curriculum, Saturday School opportunities, and homework on SuccessMaker software programs. Others who needed to be challenged took accelerated classes in math offered for the first time in

2019. State test scores show that Utopian Academy out-performed Clayton County Schools in math, science, reading, and language arts in grades 6-8. Test scores in eighth grade math were only slightly higher than the county, however. The area will be a point of focus for support in 2019-20. Utopian scholars soared above state averages in reading and language arts. (See chart on next page.)

SUCCESS BY THE NUMBERS

Administrators are planning for similar gains this year as students continue to take benchmark assessments and practice math and reading on SuccessMaker. &quot;By the time we get to the end of the first semester, the hope is to have students with at least 48 hoursthat means 24 hours of reading and 24 hours of math,&quot; said Principal Ron Boykins. &quot;They will grow a school year. Some have already achieved that.&quot;

FOUNDER AWARDED FELLOWSHIP UAFA Founder and Superintendent Dr. Artesius Miller has been named as a fellow at Morehouse College&#39;s Bonner Office of Community Service. Miller, a former Morehouse Bonner Scholar, will develop a new course that will be mandatory for Morehouse students selected for the the service learning scholarship program next fall. Miller is also an adjunct professor at Morehouse who teaches a class about school leadership, policy, and entrepreneurship. He is a member of the State Board of the Technical College System of Georgia, and has a bachelor’s degree in Economics from Morehouse, a master’s degree in Education Leadership from Teachers College at Columbia University, and an Educational Administration and Policy doctorate from the University of Georgia.

4. SCHOLAR MAKES FILM HISTORY Seventh grader Elijah Fikes, the winner of Utopian Academy’s annual Student Film Festival, was invited to screen his comedy at the state level. The budding director made history as the first middle school student to show his film at the Black Film Festival Atlanta. His short follows the trials of an awkward middle school boy who develops a crush on a new girl who begins attending his school. The humorous student faces the school bully to win the affection of the new girl. “Every time we host a student film festival at Utopian Academy, we submit to local festivals,” said Ebonne Craft, Dean of Arts at Utopian. “The Black Film Festival Atlanta organizers were blown away by Elijah Fikes’ film. He was only a

He was only a sixth grader at the time he directed it.&quot; Fikes screened his film at the state competition in September. He was among the “VIP” filmmakers at the event. Networking with other filmmakers at the state level was exciting for Fikes. &quot;This was my first time directing a film. I was really surprised that I was invited to the festival. It was great. I got to meet a lot of people who want to do films.&quot; Juan Ponder, broadcast and film teacher at Utopian, worked with Fikes and his team on the script for the short. The student said that he wants to pursue a career as a producer after college and that Utopian is giving him real experience in his future field. &quot;Without Utopian I wouldn&#39;t be as successful as I have been in the arts,&quot; he said. &quot;I am really thankful.&quot;

EAGLES OF THE MONTH SOAR

physical education teacher. &quot;It&#39;s an honor to be part of school history as the first to receive the award,&quot; Coach Harris said. &quot;I have been here for five of Utopian&#39;s six years. Teaching is a big part of my life.&quot; are nominated for the honor by their peers. The employees are then voted on by their colleagues and the administration. Those who receive the top votes win the recognition, which includes

school-wide praise and a gift card as a token of appreciation for their dedication. The first to receive the honor are: Angelic Calvin, office manager at UAFA, and Coach Raymond Harris,

Calvin, in her fourth year, said she was also excited about receiving the recognition. She greets students, parents, and guests with a warm smile and kind words as “CEO” of customer

experience. &quot;I am very flattered,&quot; she said of the award. &quot;My my goal is to be someone outside of home that lets students and parents know that no matter what is going on in their lives, everything is going to be okay.”

LIGHTS, CAMERA, ACTION! We are UNIQUE. We are UTOPIAN.

PARTNERSHIPS Utopian Academy recently hosted a visit by the Education Funder&#39;s Collaborative, an organization that includes representatives of top local and national foundations interested in supporting the success of students in K-12 and in higher education.

MENTORING Morehouse College scholars interested in working as teachers, administrators, and K-12 school founders visit Utopian Academy to learn about the school&#39;s history. The tour is part of a class taught by UAFA Superintendent Artesius Miller.

LEADERSHIP Utopian Academy choral students sang during a special Veteran&#39;s Day program at Riverdale Chamber of Commerce&#39;s annual luncheon for the heroes. The students performed under the direction of Jerel Jefferson, music teacher at UAFA.

IN THE SPOTLIGHT A DAY WITH A DIVA

Singer and actress Shirley Murdock visited Utopian Academy recently during a break from a recent stage play touring Atlanta. Murdock shared insight about her career with students. Utopian has a new computer coding class that is teaching students about music production.

Hear Murdock talk about her visit to Utopian.

CONTINUE TO STRIVE FOR EXCELLENCE CLASS OF 2019