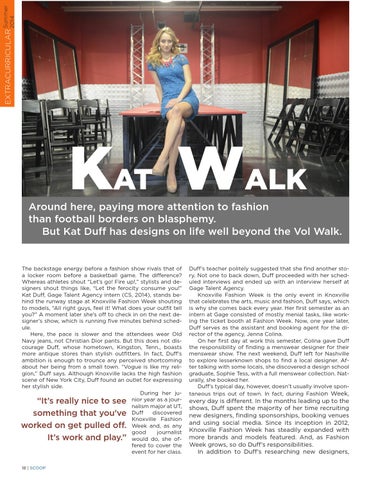 Around here, paying more attention to fashion than football borders on blasphemy. But Kat Duff has designs on life well beyond the Vol Walk.

The backstage energy before a fashion show rivals that of a locker room before a basketball game. The difference? Whereas athletes shout “Let’s go! Fire up!,” stylists and designers shout things like, “Let the ferocity consume you!” Kat Duff, Gage Talent Agency intern (CS, 2014), stands behind the runway stage at Knoxville Fashion Week shouting to models, “All right guys, feel it! What does your outfit tell you?” A moment later she’s off to check in on the next designer’s show, which is running five minutes behind schedule. Here, the pace is slower and the attendees wear Old Navy jeans, not Christian Dior pants. But this does not discourage Duff, whose hometown, Kingston, Tenn., boasts more antique stores than stylish outfitters. In fact, Duff’s ambition is enough to trounce any perceived shortcoming about her being from a small town. “Vogue is like my religion,” Duff says. Although Knoxville lacks the high fashion scene of New York City, Duff found an outlet for expressing her stylish side. During her junior year as a jour“It’s really nice to see nalism major at UT, something that you’ve Duff discovered Knoxville Fashion worked on get pulled off. Week and, as any good journalist It’s work and play.” would do, she offered to cover the event for her class. 18 | SCOOP

Duff’s teacher politely suggested that she find another story. Not one to back down, Duff proceeded with her scheduled interviews and ended up with an interview herself at Gage Talent Agency. Knoxville Fashion Week is the only event in Knoxville that celebrates the arts, music and fashion, Duff says, which is why she comes back every year. Her first semester as an intern at Gage consisted of mostly menial tasks, like working the ticket booth at Fashion Week. Now, one year later, Duff serves as the assistant and booking agent for the director of the agency, Jenna Colina. On her first day at work this semester, Colina gave Duff the responsibility of finding a menswear designer for their menswear show. The next weekend, Duff left for Nashville to explore lesser­known shops to find a local designer. After talking with some locals, she discovered a design school graduate, Sophie Tess, with a full menswear collection. Naturally, she booked her. Duff’s typical day, however, doesn’t usually involve spontaneous trips out of town. In fact, during Fashion Week,

every day is different. In the months leading up to the shows, Duff spent the majority of her time recruiting new designers, finding sponsorships, booking venues and using social media. Since its inception in 2012, Knoxville Fashion Week has steadily expanded with more brands and models featured. And, as Fashion Week grows, so do Duff’s responsibilities. In addition to Duff’s researching new designers, 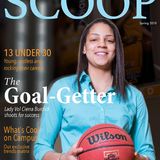