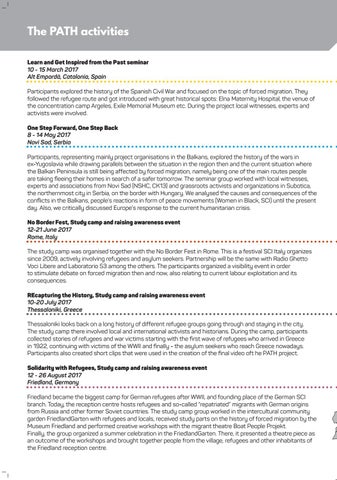 The PATH activities Learn and Get Inspired from the Past seminar 10 - 15 March 2017 Alt Empordà, Catalonia, Spain Participants explored the history of the Spanish Civil War and focused on the topic of forced migration. They followed the refugee route and got introduced with great historical spots: Elna Maternity Hospital, the venue of the concentration camp Argeles, Exile Memorial Museum etc. During the project local witnesses, experts and activists were involved. One Step Forward, One Step Back 8 - 14 May 2017 Novi Sad, Serbia Participants, representing mainly project organisations in the Balkans, explored the history of the wars in ex-Yugoslavia while drawing parallels between the situation in the region then and the current situation where the Balkan Peninsula is still being affected by forced migration, namely being one of the main routes people are taking fleeing their homes in search of a safer tomorrow. The seminar group worked with local witnesses, experts and associations from Novi Sad (NSHC, CK13) and grassroots activists and organizations in Subotica, the northernmost city in Serbia, on the border with Hungary. We analysed the causes and consequences of the conflicts in the Balkans, people’s reactions in form of peace movements (Women in Black, SCI) until the present day. Also, we critically discussed Europe’s response to the current humanitarian crisis. No Border Fest, Study camp and raising awareness event 12-21 June 2017 Rome, Italy The study camp was organised together with the No Border Fest in Rome. This is a festival SCI Italy organizes since 2009, actively involving refugees and asylum seekers. Partnership will be the same with Radio Ghetto Voci Libere and Laboratorio 53 among the others. The participants organized a visibility event in order to stimulate debate on forced migration then and now, also relating to current labour exploitation and its consequences. REcapturing the History, Study camp and raising awareness event 10-20 July 2017 Thessaloniki, Greece Thessaloniki looks back on a long history of different refugee groups going through and staying in the city. The study camp there involved local and international activists and historians. During the camp, participants collected stories of refugees and war victims starting with the first wave of refugees who arrived in Greece in 1922, continuing with victims of the WWII and finally - the asylum seekers who reach Greece nowadays. Participants also created short clips that were used in the creation of the final video oft he PATH project. Solidarity with Refugees, Study camp and raising awareness event 12 - 26 August 2017 Friedland, Germany Friedland became the biggest camp for German refugees after WWII, and founding place of the German SCI branch. Today, the reception centre hosts refugees and so-called “repatriated” migrants with German origins from Russia and other former Soviet countries. The study camp group worked in the intercultural community garden FriedlandGarten with refugees and locals, received study parts on the history of forced migration by the Museum Friedland and performed creative workshops with the migrant theatre Boat People Projekt. Finally, the group organized a summer celebration in the FriedlandGarten. There, it presented a theatre piece as an outcome of the workshops and brought together people from the village, refugees and other inhabitants of the Friedland reception centre. 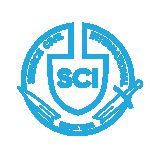 Peace Activism Through Lessons from History of Forced Migration (PATH) was a 16 month long international project, whose main topic was to us...

Peace Activism Through Lessons from History of Forced Migration (PATH) was a 16 month long international project, whose main topic was to us...