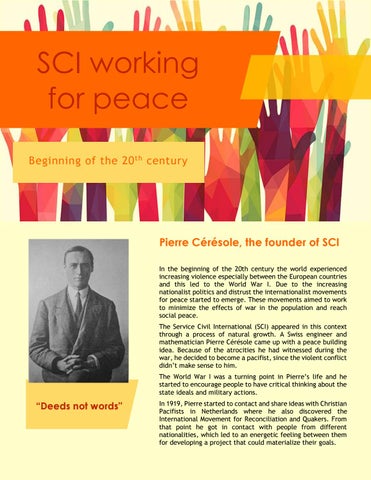 Pierre Cérésole, the founder of SCI In the beginning of the 20th century the world experienced increasing violence especially between the European countries and this led to the World War I. Due to the increasing nationalist politics and distrust the internationalist movements for peace started to emerge. These movements aimed to work to minimize the effects of war in the population and reach social peace. The Service Civil International (SCI) appeared in this context through a process of natural growth. A Swiss engineer and mathematician Pierre Cérésole came up with a peace building idea. Because of the atrocities he had witnessed during the war, he decided to become a pacifist, since the violent conflict didn’t make sense to him. The World War I was a turning point in Pierre’s life and he started to encourage people to have critical thinking about the state ideals and military actions.

In 1919, Pierre started to contact and share ideas with Christian Pacifists in Netherlands where he also discovered the International Movement for Reconciliation and Quakers. From that point he got in contact with people from different nationalities, which led to an energetic feeling between them for developing a project that could materialize their goals.

Beginning of the 20th century

The start of SCI After finding same minded friends and getting to know the work of the Quakers, Pierre got an idea of organizing a voluntary project with participants from different backgrounds. The first camp took place on the former battlefield of Verdun (France) in 1920. During the five months of the camp the volunteers built several temporary homes for the local farmers. One of Pierre’s main ideas was to reconcile the relationships between the German and French people. That is the reason why he invited some Germans to participate in the camp as well. After the project had lasted for five months the French authorities asked the German participants to leave the camp, otherwise the group couldn’t be able to continue the work. The idea of only German volunteers leaving the camp didn’t meet with the goals of reconciliation and that’s why Pierre decided to end the project. All the volunteers left the project in April 1921. After the first workcamp, Pierre focused on promoting civil service and finding more volunteers to participate. This led to an establishment of Service Civil International in 1924. Upcoming years SCI got more active with more workcamps and supporters from all around the world. Initiatives in several countries (Switzerland, France, UK) started to organize their own projects and created the network of SCI. In 1945 the first international meeting of European SCI representatives was organized.

SCI’s work The first voluntary work camp projects of SCI consisted mainly of relief work in areas affected by natural disasters and later on also community and development aid projects. One of the these was the community development project in Wales during the economy crisis in the UK in 1931. A group of volunteers together with local unemployed men built a public park and a swimming pool in order to brighten up their community. Another example of the projects of SCI in the beginning of twentieth century was the project helping the refugees in the Spanish Civil War in years 1936 - 1939. At the time of the war, SCI helped to evacuate 9 823 people, also with the transportation and administration of clothes and food. The last actions of SCI before the end of World War II was focused on the relief work in Palestine, Egypt and Greece in 1944. Once the war was over they started to organize workcamps in France, Germany, Italy and the Netherlands. Part of the Pierre’s personal anti-military struggle was also the suppression of the military service. He submitted a strong opposition to it from the beginning, even getting several prison sentences for refusing to pay the military taxes. In 1939 SCI service got recognized as alternative to the military service in UK. Those objectors worked for ecological propose in their own countries.

Beginning of the 20th century

Volunteering for peace From the beginning of its existence, SCI has been working for creating more peaceful world. CeresoleÂ´s idea was to minimize the effects of the war and connect people who were divided by it through volunteering. Ceresole believed in actions over words.

Already the projects organized in the beginning of the 20th century affected their participants and the local communities in many ways. The SCI network grew fast and people got involved in many projects. In the middle of violent world people wanted to give their helping hands. In the voluntary work camps volunteers were building new relationships and connections around the world. At the same time, they were able to help the local communities and empower themselves through the knowledge they gained in the projects. The projects helped people to break the possible stereotypes they had towards other groups of people. While working together as equals and towards a common goal, they were able create better relationships with people from different backgrounds. This was Pierreâ&#x20AC;&#x2122;s idea already in the first work camp in Verdun: to bring the previous enemies to work together and unite them. Even though the project didn't end in the way Pierre had hoped, it started a long history of volunteering for peace. 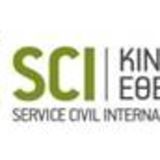