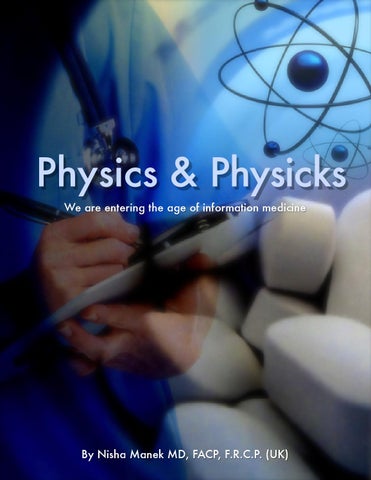 Physics & Physicks We are entering the age of information medicine

as an alien – but he ended up touching every

the world lost a beloved icon of the

element of the human spirit. He made us

laugh. He made us cry. He gave his

found dead, of apparent suicide, at

immeasurable talent freely and generously to

the age of 63. Williams struggled for decades with depression.

President Obama issued a touching tribute own streets. The Obama family offers our to the actor and comedian and said: “Robin condolences to Robin’s family, his friends, Williams was an airman, a doctor, a genie a and everyone who found their voice and their nanny, a president, a professor, a bangarang verse thanks to Robin Williams.” Peter Pan, and everything in between. But he was one of a kind. He arrived in our lives

Depression: An Urgent Public Health Issue With the death of Robin Williams, mental

depression? According to the CDC data,

health professionals hope his legacy — one of laughter and extraordinary creative talent — will also include the start of a vital conversation. It’s a discussion we desperately need to have. The Centers for Disease Control

persons between the ages of 45 to 64 years, members of Hispanic, black or other races, persons unable to work or are unemployed, people with less than high school education, or those who have no medical insurance are

more likely to suffer from major depression. But people from all different backgrounds, upbringings and household wealth brackets can be affected.

depression. These numbers are simply staggering. Who tends to be most affected by

results in an estimated 1 million deaths every year.

depression worldwide. Although there are

Depression is one of the priority

than half of those affected in the world (in

some countries, fewer than 10%) receive

such treatments. Among barriers to

services for people with mental,

effective care include a lack of resources

neurological and substance use disorders,

through care provided by health workers

Just think about it. Worldwide over 300

who are not specialists in mental health.

million people do not receive adequate

The program asserts that with proper

care for their depression. This is a

sobering fact because of the ripple effects

medication, tens of millions of people with

poorly at work, at school

could begin to lead normal

and in the family. At its

human intention matters Intention is the basis of information medicine. It smashes every conceivable boundary in medicine. - Dr. William Tiller

How Can Physics Help Treat Depression? In 2004, Dr. William Tiller, in collaboration

and therefore powerful. Contrast this with

with colleagues from Holos University,

an ordinary light bulb which has a wide

spectrum of light-waves many of which

with depression that was nothing short of

cancel out and the resultant light beam is

remarkable. Because the design was novel

weaker. As long as the imprinted device is

and so different from traditional medicine, it

on, then a beam of powerful coherent

is worthwhile noting some background in

information is continually broadcast. The

information broadcast is not

First, intention (or a better term,

electromagnetic in nature. There are no

information) can be successfully imprinted

telephone wires carrying the information to

into a device. Ordinarily, when we think of

holding an intention, we consider it a mental

But the third aspect is what is really mind-

bending. A single imprinted device in one

physical consequences. However, Tiller and

his team have shown that intention (or

information simultaneously to hundreds of

information) can be imprinted into a device

recipients at once. Think about it. No

stably for several months. That means the

device is not an inert piece of equipment. It

the creator of the intention (Dr. Bill Tiller)

“holds” or stores information for long

and the people who are receiving the

periods of time, up to 6 months, without leakage.

healing intention. That’s right. There is no physical contact necessary with the device

The second aspect of Tiller physics is the

and the people who are receiving the

following: the active imprinted device is

then utilized to send or “broadcast”

to be outrageous. But the results were more

information to very specific targets or

than outrageous. They smash every

subjects over hundreds or thousands of

conceivable boundary in medicine. And…

miles. Think of it like a laser beam of light

usher’s in the age of Information Medicine.

pulsing continually. A laser-light is coherent

group A (again, think of it as a coherent

depression were enrolled from four clinics in

the US, Canada and Mexico. They were

to come in. It was clear that there were

randomly assigned to one of two groups, A

significant improvements in ZUNG scores in

and B: people in group A received the

people in group A receiving the healing

intention broadcast to heal depression. The

intention versus those in group B who were

people in group B continued to receive

significant was the difference between

depression. The participants as well as their

groups A and B that a benchmark in

providers were blinded as to

their group allocation. In

in scores of the ZUNG.

at Holos University and

no one knew the names of the people who would receive the intention healing broadcast. Data on depression severity was collected using a standard instrument called the ZUNG self rating scale for depression. Data was gathered at baseline and at 3 and 8 months of the experiment. Dr. Tiller designed an intention statement to alleviate the suffering of depression. This precise statement was imprinted into a device by Tiller and his team. The imprinted (active) device was housed at Holos University in Missouri for the duration of the experiment. The device was continually switched on to broadcast the information to

Intention is beamed from a single site in Missouri to all participants located in N. America, Canada and Mexico

Intriguing Questions Remainâ&#x20AC;Ś. Many questions are raised by the significant results in the depression study. For one thing, if people with depression got better just by receiving the intention information, how did it, the information, reach them from a single broadcast site? The Tiller physics theory postulates that intention information is of a magnetic wave nature (and does not require telephone wires). How then does the information â&#x20AC;&#x153;knowâ&#x20AC;? which participants are the target or active group? Remember, there are no connections from one imprinted device physically located in Missouri to the participants who are as far away as 1000 miles. Are these remarkable results showing the effects of a form of connectivity between the Missouri site and the participants who entered the trial? That is, are we seeing entanglement effects on a large or macroscopic scale?

Results show the effects of a form of connectivity between the Missouri site and the participants who entered the trial. Connectivity means entanglement!

There are other questions for modern medicine because everything we know by conventional wisdom and in conventional medicine is challenged by this trial. Is a physician physically needed to heal or treat a sick person? Can one very conscious human being assist another by his or her own focused intention? Is there a dose response? In other words is more intention / information better or faster with achieving desired health results?

Projects Underway in Intention Broadcast The depression study design is now being used in the autism project.

The intention broadcast for autistic is being beamed from Arizona to participating families all across the world as far away as Australia and Scandinavia and is having profound effects on the wellbeing of the children and their parents. The preliminary results of the autism project confirm what was found in the depression study. Readers who are interested in learning more can read the premier issue article by Suzy Miller who is leading this project. (http://suzymiller.com/

Another project led by Dr. Gabriele Hilberg of San Francisco is ongoing. In this project, participants can sign up to receive a broadcast that is designed by Dr. Bill Tiller to increase self-compassion. This program is unique in that it is designed to increase positive selfawareness and reduce self-criticism and feelings of unworthiness. It is open to all interested. Think of it like preventive care. In the selfcompassion broadcast study, data is also being collected and results will be presented in future issues of Science & Spirit. Readers are invited to explore the self-compassion study by logging into: http://www.selfcompassionintention.com/

Proposed Future Projects: Recently, the veterans of America have

veterans suffering from PTSD in the state of

captured the headlines. Post Traumatic Stress Disorder (PTSD) is a difficult disease of otherwise physically healthy veterans. Among the many symptoms someone with PTSD suffers includes depression. There is no one

Arizona. The outcomes of those receiving the program can be compared to conventional medicine as well as other options such as meditation. Can intention augment the positive effects of meditation? It is well worth

answer to successfully alleviating PTSD. The VA health system has been proactive in opening up the options of unconventional strategies such as teaching meditation and Tai Chi to sufferers of PTSD. I propose that an

remembering that there are no side effects from intention broadcast as far as we know. Intention based therapeutics are termed “information medicine” by Dr. Tiller as distinct from “chemical medicine” which is

intention broadcast program could assist our veterans. A simple program might look like this: a specific intention is broadcast to say,

pharmaceutical based. The potential cost savings to a health system using information medicine are staggering to contemplate.

Other Applications: There are many other applications for information medicine. What about intention broadcast to

around the world to help these young kids get a boost in their early development? And what about maximizing chemotherapeutic effects for

another modern scourge where conventional medicine is severely limited in its approach. Intention based therapeutics offer an answer to some of the toughest challenges in medicine.

Doing more with less, with intention.

We are urgently asking ourselves, how can we reduce the astronomical costs of medical care? Searching for new paths to affordable, effective therapeutics might seem like

The state of American health

hoping for a miracle. In fact, if American medicine is to progress, we are going to need thousands of miracles. We call these miracles technology. Medical technology has changed the practice of medicine. But

Healthcare in the United

medical technology has also been about more and more money. The intention host device is a miraculous technology because it allows us to do more with less.

is declining, and the healthcare system is in crisis. States, while touted by Americans as the best in the world, is dysfunctional, costly, and a burden on the economy that threatens to bankrupt us.

ABOUT THE AUTHOR: Nisha Manek, MD, FACP, F.R.C.P (UK). Nisha Manek is a graduated from the Glasgow University School of medicine in Scotland. She has followed a conventional and rigorously conventional scientific pathway which has taken her to Stanford University for her rheumatology training and then to Mayo Clinic in Rochester, Minnesota for over 11 years in the Division of Rheumatology. She is now following an unconventional route to seriously study information medicine and its potential application to challenging health issues. 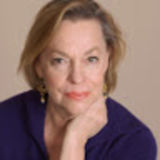 With the death of Robin Williams, mental health professionals hope his legacy — one of laughter and extraordinary creative talent — will als...

With the death of Robin Williams, mental health professionals hope his legacy — one of laughter and extraordinary creative talent — will als...