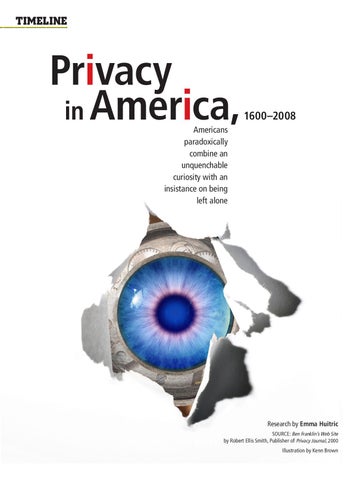 SOCIAL LIFE AND TECHNOLOGY 1600s : The clergy, who keep records of births, marriages and deaths, cast an ever widening net for information about civic affairs. In Massachusetts, “tythingmen,” or government watchdogs, inspect households for proper moral conduct.

1629: Massachusetts Bay Colony: Settlement with one of the ﬁrst and best record databases on population. Information on births, marriages, deaths, wills and more was recorded.

1600s : Under Puritan rules, it is a civic duty to keep an eye on your neighbor. In many towns, people are forbidden to live alone.

As settlements were established and more people immigrated, the church began playing a smaller role in people’s day-to-day lives. Although families lived together (affording little privacy within the home), privacy from ones surroundings was expected. Most settlers had left Europe due to persecution, and sought to live and express themselves freely, hence the demand for privacy. The new saying was, “Let every one meddle with his own business.”

1700s: Private life is seen as a haven from public turmoil. The colonists concur with the English and the Romans that “a man’s home is his castle.”

1775: First Postal Service instigated; no conﬁdentiality assured. 1700s: Mail is routinely opened as it passes through the postal system.

1800s: The “penny press” publishes unbridled gossip about the private lives of celebrities, under the protection of the First Amendment.

1800 1791: The Bill of Rights protects 1787: The U.S. Constitution stipulates that a census be conducted once a decade. Many people regard the census with mistrust.

GIPSTEIN/CORBIS (Preamble to the Constitution); CRAIG BREWER (Bill of Rights)

freedom of speech and freedom from unreasonable search and seizure.

1838: The telegraph is introduced, and the bugging of telegraphed messages begins.

c. 1900: Fingerprints are established as unique and unchangeable identiﬁers.

1861-1865: Civil War: Confederates use information from the census to track down Southern military camps. Mistrust toward the Census and government access to citizens’ personal information increases.

1868: 14th Amendment guarantees the right to privacy for all U.S. citizens irrespective of race and color.

1948: Sexual Behavior in the Human Male by Alfred C. Kinsey is published. Starts off by openly discussing individualsâ&amp;#x20AC;&amp;#x2122; sexual nature. Previously, sex was a private issue kept to oneself.

1930 1928: The U.S. Supreme Court rules that the seizure of electronic conversations is constitutional.

the government and authorities is high. The Cold War prompts the government to increase surveillance of populations without their knowledge.

1940 1934: Congress Federal Communications Act Section 605: Prohibits a third party from intercepting and using any communication without the authorization of the sender. This, however, had very little impact on preventing such a practice.

1936: Social Security numbers are assigned to most adult Americans and become a lifelong piece of personal identity.

SOCIAL LIFE AND TECHNOLOGY 1973: “There is growing concern that computers now constitute, or will soon constitute, a dangerous threat to individual privacy.” – Horst Feistel

1967: In the case of Katz v. United States, the Supreme Court rules that intercepting communications requires a warrant.

1968: Congress passes a law providing for wiretap warrants in criminal investigations. The Omnibus Crime Control and Safe Streets Act, Title III (sometimes referred to as the “end of privacy”), speciﬁces when a warrant is required for wiretapping.

President Nixon (claiming the security of the nation) ordered the wiretapping of government agents as well as the Democratic National Committee’s headquarters.

1989: The World Wide Web service is added to the Internet.

1978–1994: Congress passes reﬁnements to the wiretapping laws, ﬁrst in response to the abuses of the Watergate era and later to require telecommunications companies to be “wiretap-ready.”

creasing cases of a new crime called identify theft are being reported.

2008: Congress updates the 1978 wiretapping law, expanding the surveillance powers of the executive branch. President George W. Bush signs a national security directive that expands the surveillance of Internet trafﬁc to and from the U.S. government.