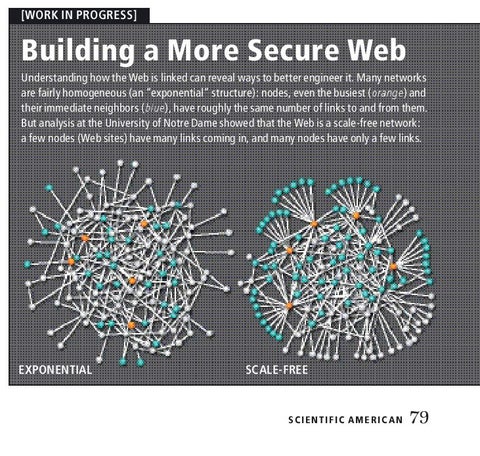 growth demands an explanation. Arguably, the introduction of very simple mechanisms, especially TrackBack, facilitated the growth. If a blogger writes an entry commenting on or referring to an entry at another blog, TrackBack notifies the original blog with a “ping.” This notification enables the original blog to display summaries of all the comments and links to them. In this way, conversations arise spanning several blogs and rapidly form networks of individuals interested in particular themes. And here again large portions of the blog structure become linked via short paths — not only the blogs and bloggers themselves but also the topics and entries made. As blogging blossomed, researchers quickly created interesting tools, measurement techniques and data sets to try to track the dissemination of a topic through blogspace. Social-media analyst Matthew Hurst of Microsoft Live Labs collected link data for six weeks and produced a plot of the most active and interconnected parts of the blogosphere [see illustration on next page]. It showed that a number of blogs are massively popular, seen by 500,000 different individuals a day. A link or mention of another blog by one of these superblogs guarantees a lot of traffic to the site referenced. The plot also shows isolated groups of dedicated enthusiasts who are very much in touch with one another but barely connect to other bloggers. If exploited correctly, the blogosphere can be a powerful medium for spreading an idea or gauging the impact of a political initiative or the likely success of a product launch. The much anticipated release of the Apple iPhone generated 1.4 percent of all new postings on its launch day. One challenge is to understand how this dissemination might change our view of journalism and commentary. What mechanisms can assure blog readers that the facts quoted are trustworthy? Web science can provide ways to check this so-called provenance of information, while offering practical rules about conditions surrounding its reuse. Daniel Weitzner’s Transparent Accountable Datamining Initiative at M.I.T. is doing just that.

Nigel Shadbolt (left) is professor of artificial intelligence at the University of Southampton in England, chief technology officer of the Semantic Web company Garlik Ltd., and a past president of the British Computer Society. Tim Berners-Lee (right) invented the World Wide Web and leads the World Wide Web Consortium, based at the Massachusetts Institute of Technology.

cars for sale in western Massachusetts under $8,000” returns more than 2,000 general Web pages. Once Semantic Web capabilities are added, a person will instead receive detailed information on seven or eight specific cars, including their price, color, mileage, condition and owner, and how to buy them. Engineers have devised powerful foundations for the Semantic Web, notably the primary language — the Resource Description Framework (RDF) — which is layered on top of the basic HTML and other protocols that form Web pages. RDF gives meaning to data through sets of “triples.” Each triple resembles the subject, verb and object of a sentence. For example, a triple can assert that “person X” [subject] “is a sister of” [verb] “person Y” [object]. A series of triples can determine that [car X] [is brand] [To­ yota]; that [car X] [condition is] [used]; that [car X] [costs] [$7,500]; that [car X] [is located in] [Lenox]; and that [Lenox] [is located in] [western Massachusetts]. Together these triples can conclude that car X is indeed a proper answer to our query. This simple triple structure turns out to be a natural way to describe a large majority of the data processed by machines. The subjects, verbs and objects are each identified by a Universal Resource Identifier (URI) — an address just like that used for Web pages. Thus, anyone can define a new concept, or a new verb, by defining a URI for it on the Web.

Building a More Secure Web Understanding how the Web is linked can reveal ways to better engineer it. Many networks are fairly homogeneous (an “exponential” structure): nodes, even the busiest (orange) and their immediate neighbors (blue), have roughly the same number of links to and from them. But analysis at the University of Notre Dame showed that the Web is a scale-free network: a few nodes (Web sites) have many links coming in, and many nodes have only a few links.

Rise of Semantics One emerging phenomenon that is benefiting from concerted research is the rise of the Semantic Web — a network of data on the Web. Among many payoffs, the Semantic Web promises to give much more targeted answers to our questions. Today searching Google for “Toyota used w w w. S c i A m . c o m

Sidebars from the Scientific American article about studying the web