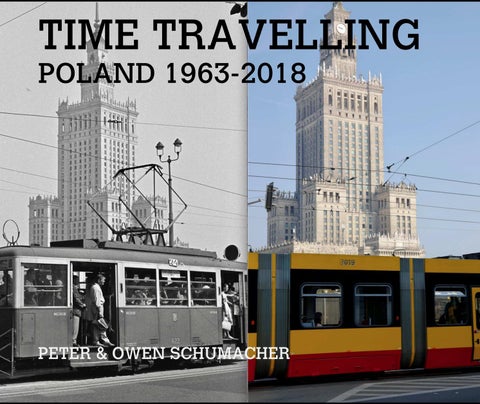 Left: Owen in Warsaw. Picture by Lukasz Kopec Right: Comparing a shot with the original picture on the phone. Picture by Wojchiek Mania

PREFACE This album is a tribute to my father&#39;s photos. Peter Schumacher is 85 right now and alive and kicking in Amsterdam. He&#39;s a retired journalist, but used to be a photographer. In 1963 he made a trip to Poland to make pictures of everyday life with his Leica M2, in the style of photographer Henri Cartier Bresson, whom he admired a lot. To make such pictures was quite unusual in those days. For a long time I didn&#39;t know about the existence of these photos until they were published in a book: Polska 1963. I admired them immediately and now 55 years later I decided to step into my fathers footsteps and went to Poland for ten days to visit the same places, pay tribute to his pictures and try to catch Polish life in 2018.

In this book I&#39;ve made new combinations of our pictures. Sometimes by being on the same spot, sometimes by having the same sort of subject or sometimes just by association. But always my father&#39;s picture first, in black and white, and my contribution in colour. I was pleased to see the many possitive reactions to my father&#39;s photos in Poland and decided to scan all the old negatives. This way it was possible to make even more combinations with pictures that have never been published before. I really hope you will enjoy this album as much as I did making it. Owen Schumacher Amsterdam, October 2018.

ACKNOWLEDGEMENTS I would like to thank my father Peter for his inspirational photos, the late Jos van Woensel from Dutch Art &amp; Media House for publishing these photos at his own expense in 2007, Hans Molenaar and crew from Leicastore Amsterdam for letting me use the Leica CL and Leica DLux, Malgorzata Duijnmayer and all the people from the Polish Tourism Organisation in Amsterdam for making this project possible. Thanks to Lucasz Kopec for showing me around in Warsaw and Wojchiek Mania for doing the same in Poznan. And of course the late Andrzej Zaborski, my father&#39;s Polish friend and guide.

In 1963 photographer Peter Schumacher went to Poland to make photos of everyday Polish life. In 2018, 55 years later, his son Owen returns to the same places to make a tribute to his father's pictures and catch contemporary Polish life. The series in pairs make that you watch the pictures even closer.