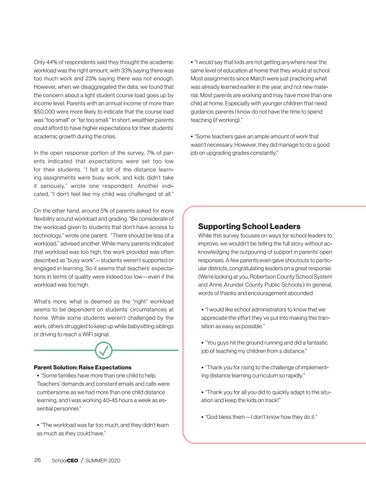 Only 44% of respondents said they thought the academic workload was the right amount, with 33% saying there was too much work and 23% saying there was not enough. However, when we disaggregated the data, we found that the concern about a light student course load goes up by income level. Parents with an annual income of more than $50,000 were more likely to indicate that the course load was “too small” or “far too small.” In short, wealthier parents could afford to have higher expectations for their students’ academic growth during the crisis. In the open response portion of the survey, 7% of parents indicated that expectations were set too low for their students. “I felt a lot of the distance learning assignments were busy work‚ and kids didn’t take it seriously,” wrote one respondent. Another indicated, “I don’t feel like my child was challenged at all.” On the other hand, around 5% of parents asked for more flexibility around workload and grading. “Be considerate of the workload given to students that don’t have access to technology,” wrote one parent. “There should be less of a workload,” advised another. While many parents indicated that workload was too high, the work provided was often described as “busy work”—students weren’t supported or engaged in learning. So it seems that teachers’ expectations in terms of quality were indeed too low—even if the workload was too high. What’s more, what is deemed as the “right” workload seems to be dependent on students’ circumstances at home. While some students weren’t challenged by the work, others struggled to keep up while babysitting siblings or driving to reach a WiFi signal.

• “I would say that kids are not getting anywhere near the same level of education at home that they would at school. Most assignments since March were just practicing what was already learned earlier in the year, and not new material. Most parents are working and may have more than one child at home. Especially with younger children that need guidance, parents I know do not have the time to spend teaching (if working).” • “Some teachers gave an ample amount of work that wasn’t necessary. However, they did manage to do a good job on upgrading grades constantly.”

Supporting School Leaders While this survey focuses on ways for school leaders to improve, we wouldn’t be telling the full story without acknowledging the outpouring of support in parents’ open responses. A few parents even gave shoutouts to particular districts, congratulating leaders on a great response. (We’re looking at you, Robertson County School System and Anne Arundel County Public Schools.) In general, words of thanks and encouragement abounded. • “I would like school administrators to know that we appreciate the effort they’ve put into making this transition as easy as possible.” • “You guys hit the ground running and did a fantastic job of teaching my children from a distance.”

Parent Solution: Raise Expectations • “Some families have more than one child to help. Teachers’ demands and constant emails and calls were cumbersome as we had more than one child distance learning, and I was working 40-45 hours a week as essential personnel.”

• “Thank you for rising to the challenge of implementing distance learning curriculum so rapidly.” • “Thank you for all you did to quickly adapt to the situation and keep the kids on track!” • “God bless them—I don’t know how they do it.”

• “The workload was far too much, and they didn’t learn as much as they could have.” 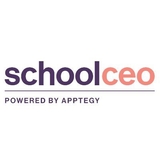 In our eighth edition of SchoolCEO, we survey parents over their impressions of distance learning. Dr. Don Lifto shares his research, and we...

In our eighth edition of SchoolCEO, we survey parents over their impressions of distance learning. Dr. Don Lifto shares his research, and we...