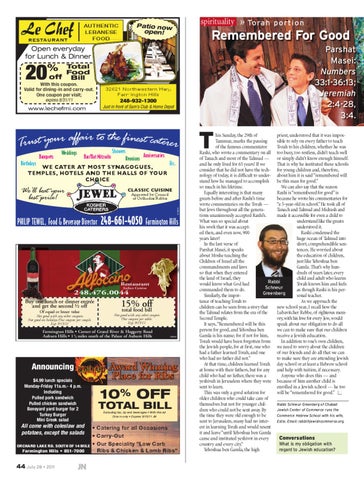 With this coupon. Valid for dining-in and carry-out. One coupon per visit; expires 8/31/11

Anniversaries Reunions Birthdays Etc. WE CATER AT MOST SYNAGOGUES, TEMPLES, HOTELS AND THE HALLS OF YOUR CHOICE Banquets

Approved by Council of Orthodox Rabbis

Not good with any other coupons Not good on holidays.One coupon per couple. Exp 9/15/11

All come with coleslaw and potatoes, except the salads ORCHARD LAKE RD. SOUTH OF 14 MILE

TOTAL BILL Excluding tax, tip and beverages • With this ad Dine in only • Expires 9/15/11 JN

his Sunday, the 29th of priest, understood that it was imposTammuz, marks the passing sible to rely on every father to teach of the famous commentator Torah to his children, whether he was Rashi, who wrote a commentary on all too busy, too restless, didn’t teach well of Tanach and most of the Talmud — or simply didn’t know enough himself. and he only lived for 65 years! If we That is why he instituted these schools consider that he did not have the tech- for young children and, therefore, nology of today, it is difficult to under- about him it is said “remembered will stand how he managed to accomplish be this man for good.” so much in his lifetime. We can also say that the reason Equally interesting is that many Rashi is “remembered for good” is greats before and after Rashi’s time because he wrote his commentaries for wrote commentaries on the Torah — “a 5-year-old in school.” He took all of but Jews throughout all the generaTanach and Talmud and Midrash and tions unanimously accepted Rashi’s. made it accessible for even a child to What was so special about understand like the greats his work that it was acceptunderstood it. ed then, and even now, 900 Rashi condensed the years later? huge ocean of Talmud into In the last verse of short, comprehendible senParshat Masei, it speaks tences. He worried about about Moshe teaching the the education of children, Children of Israel all the just like Yehoshua ben commandments and laws Gamla. That’s why hunso that when they entered dreds of years later, every the land of Israel, they child and adult who learns Rabbi would know what God had Torah knows him and feels Schneur commanded them to do. as though Rashi is his perGreenberg Similarly, the imporsonal teacher. tance of teaching Torah to As we approach the children can be seen from a story that new school year, I recall how the the Talmud relates from the era of the Lubavitcher Rebbe, of righteous memSecond Temple. ory, with his love for every Jew, would It says, “Remembered will be this speak about our obligation to do all person for good, and Yehoshua ben we can to make sure that our children Gamla is his name; for if not for him, receive a Jewish education. Torah would have been forgotten from In addition to one’s own children, the Jewish people, for at first, one who we need to worry about the children had a father learned Torah, and one of our friends and do all that we can who had no father did not.” to make sure they are attending Jewish At that time, children learned Torah day school or at least a Hebrew school at home with their fathers, but for any and help with tuition, if necessary. child who had no father, there was a Anyone who does this — and yeshivah in Jerusalem where they were because of him another child is sent to learn. enrolled in a Jewish school — he too This was only a good solution for will be “remembered for good.” ■ older children who could take care of Rabbi Schneur Greenberg of Chabad themselves but not for younger chilJewish Center of Commerce runs the dren who could not be sent away. By Commerce Hebrew School with his wife, the time they were old enough to be sent to Jerusalem, many had no inter- Estie. Email: rabbi@jewishcommerce.org. est in learning Torah and would resent it and leave “until Yehoshua ben Gamla Conversations came and instituted yeshivot in every What is my obligation with country and every city.” regard to Jewish education? Yehoshua ben Gamla, the high