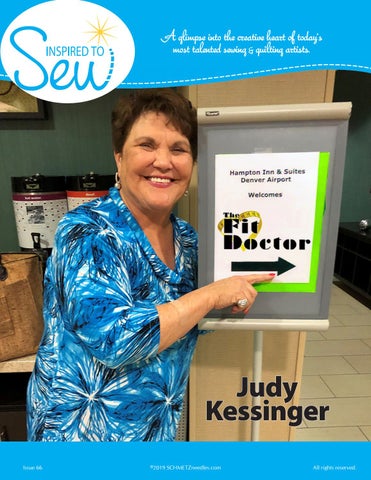 Are you tired of wearing disposable clothes? You know, those cheap clothes made of inexpensive fabric that wear only a season. With fabulous fashion fabrics becoming increasingly available, even in quilt shops, the time came for me to start fashion sewing again. My first job out of college was in New York City working for Vogue Patterns, so I will forever be loyal, but, I’m no longer a size 8. Indeed, I have a woman’s body with curves. Pass the Limoncello please with that slice of pizza! I wanted a new approach to making garments. Lucky me, meeting Judy Kessinger! Several years ago I took Judy’s FitNice class, got measured and love making her tops. Forget sizes and feeling guilty for the body you have. Judy’s FitNice System is based on measurements and a simple master pattern that you create in class, use and reuse. Sewing on knits is fun when you work with the right needle and notions, that you probably already have. I believe in the FitNice so much that in February, I became a certified FitNice instructor. Now when I see gorgeous knit fabrics, I pick up a few yards and knock out a FitNice top in two evenings: One night to wash and cut the fabric, the second night to stitch. Lickety split! No stitch police to enforce rigid sewing rules. Judy’s overnight success took forty years. She’s seen and dealt with ALL women’s insecurities. Judy’s FitNice System makes fashion sewing fun again! Simple. Fast. Good looking. Fit Nice! Rekindle your joy of sewing with Judy’s FitNice. Let’s sew! Sew SCHMETZ and Grabbit® too!

Judy Kessinger Was there a time when you enjoyed sewing your own clothes? Chances are you were a Stretch and Sew customer. Chances are also good that your recent attempts at garment sewing have been frustrating. Why? Because manufactured patterns give you directions to sew but never to fit.

Testimonials from some of Judy’s students:

We’ve all been there. But don’t give up! There is hope! Judy Kessinger’s company, FitNice, is the MISSING LINK. She has the answer to making clothes you will love to wear. Casual, comfortable and sophisticated but not couture. She keeps it simple. FitNice is ALL ABOUT THE FIT! All you need is a personal pattern — which you can use over and over again to make any number of garments.

…You are an absolute delight to listen to and your information is invaluable for making garments for ourselves and/others. Also, I am impressed by your giving spirit to help all of your students become successful. I thoroughly enjoyed my day.

“…even though I am a quilter and was at a quilting show, your class was the most inspiring class I took!! I couldn’t sleep that night as my mind was going everywhere with designs for shirts!!

…Your palazzo pants are gorgeous. I would like to make some. …I bought the whole kit and kaboodle on Saturday, went home, purchased supplies and look forward to making my clothes again... “

Business started in the basement with jogging shorts.

Judy Kessinger was born and raised in Louisville, Kentucky. Her grandmother was a large woman who made all her own clothes. Judy was always impressed by how good she looked. But, ironically, it was a very small person who inspired Judy to really start sewing. “My daughter weighed 5 pounds when she was born. Preemie clothes did not yet exist, so I started to sew tiny baby clothes.” The first time someone complimented her cute little dress, Judy was hooked. She began sewing for herself and Stretch and Sew became her happy place. Judy was an x-ray technician, and loved her job. But after her third child was born, she decided to be a full time mom.

Several years later, she met another Judy, Judy Drury, at church. The two of them wanted to do something together, but they weren’t sure what direction to take. They both loved to sew and that became their focus. They started a fabric store named Judes’. But their retail adventure didn’t last long. Judy K. had the bright idea to approach Hancock Fabrics about teaching classes. During her “pitch,” she told the District Manager that they were excellent teachers, and he should give them a chance. To prove themselves, she said they would teach “for free.” Never mind the fact that the two of them had never actually taught a class together. Judy K. said, “How hard can it be?” So they prepared a lecture about sewing notions, calling themselves “The Two Judy’s.”

At that first class, they were expecting an audience of 10 or 12 people. But instead, 100 women showed up. Panic set in. Judy K. looked at Judy D. and said, “You talk to me, and I’ll talk to you.” Their presentation was a trunk show, a Smother’s Brother’s comedy hour, a sewing demonstration…and a HUGE hit! After that show, the District Manager called Hancock’s home office. For the next 25 years, the “Two Jude’s” traveled all over the country. They taught various classes — notions, fashion sewing, Christmas in July, home dec, etc. “It was the best job in the world. We were doing what we loved, and seeing the country on somebody else’s dime.”

Because she was teaching sewing, Judy felt it was important to wear clothes she sewed. She could never understand why ladies bought so many patterns since they all started with the same three pieces: front, back and sleeve. Judy figured if she just worked with the front, back and sleeve, she could achieve the perfect, comfortable fit. So that’s what she did. She basically created her own “Personal Pattern.” For years, she used those three pieces to make her own wardrobe: tops, jackets, dresses and coats.

Judy, master of design and fit.

If a friend asked about what pattern she was wearing, Judy was always happy to share her “three pattern pieces” philosophy: front, back and sleeve. She would help them create their own master pattern. One day, a friend said, “You should make a business of this.” That was her light-bulb moment … and FitNice was born. Judy D. had already retired. So, in 2006, when a local store asked Kessinger to teach, she proposed her FitNice class. She took four students at a time, and she always began with two basic master patterns: one for tops (three pieces) and one

for pants (two pieces). After teaching thousands of women over the years, Judy knew very well that everybody has their own fitting issues, but she also understood that many of those issues were very common, and easily remedied. “At every session, I learned as much from my students as they learned from me. Every woman feels defeated by her own personal fit issues, but once you get the three pieces to fit comfortably (front, back and sleeve), you can make tops, dresses, jackets, coats. EVERYTHING you make will fit.”

Judy taught in that store for a year, and she could see FitNice was working. She was always on the lookout for a better way to convey the information. Pages of written “instructions” made it seem complicated and large photos or illustrations were confusing. Eventually, and with the help of her son Matt, Judy discovered the power of video. “This was a marriage made in heaven. I often send the video link to students BEFORE they come to class…and they totally get it. They come in with an understanding of where we’re headed, and they are much better prepared. I LOVE doing videos because while being very passionate about what I do, I am also passionate about you getting on board with me!”

Judy’s entire family has been involved with her business. Her husband, Bob is her CEO/CIO. In his words, “Carry Everything In/ Carry Everything Out.” He also keeps the books. All three of her children have worked one way or another in the business. Her son Matt does all the filming and editing. By 2012, FitNice was enjoying so much success, Judy realized she couldn’t be everywhere at once. She began the FitNice Instructor program. “To become a FitNice instructor, you spend two days with me teaching you how to look at and determine ladies’ fitting issues. We then take those issues apart one by one and you learn how to fix them. You learn the FitNice way of construction because you will be teaching from my patterns and videos. Becoming a FitNice Instructor is a combination of teacher/ designer/ motivator/self-esteem coach.”

So that’s the goal. We all want to be creative, and FitNice wants to get women back to sewing their own clothes, and loving it. Judy loves watching the light in their eyes, as those light-bulb moments happen, and they KNOW this time it’s going to be different. Understanding how to fit your own body gives you unlimited options. After she gets the fit right, every woman becomes her own designer!

Funday. The first hour is all about fitting issues and how to solve them. The next 90 minutes is a Trunk show of garments highlighting ways to camouflage those issues. After a lunch break, they come back for a Q&A. The last three hours are dedicated to individual fittings and making drawings for the attendees. Judy measures each attendee and talks about their personal fitting problems. During those three hours, the store is encouraged to demo new machines, talk about upcoming With that purpose in mind, Judy developed an 8-hour FitNice classes, and of course, allow the ladies time to shop. “This has class specifically for a retail store called Fit, Fashion and been one of the most successful classes I’ve ever done.” www.fitnicesystem.com — written by Rita Farro

SCHMETZ Professional Grade Chrome Stretch Needles The needle of choice when sewing with stretchy knits. The needle has a medium ballpoint. The short and narrow eye and deep scarf are specially designed to prevent skipped stitches. SCHMETZ Stretch preforms well on fabrics with elastic, Lycra® or Spandex. PS: Did you know Spandex is an anagram for “expands”? Available in sizes 75/11 and 90/14.

Was there a time when you enjoyed sewing your own clothes? Chances are you were a Stretch and Sew customer. Chances are also good that your...

Was there a time when you enjoyed sewing your own clothes? Chances are you were a Stretch and Sew customer. Chances are also good that your...