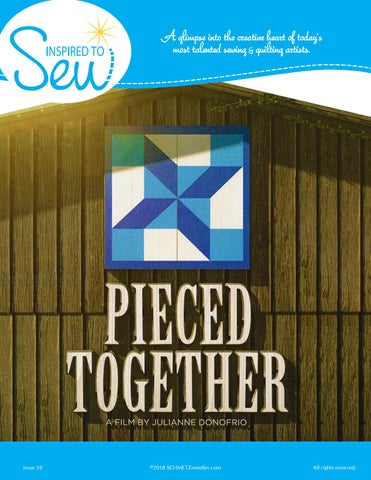 Looking for an inspired story? Wait no longer! Recently, Rita Farro & I met award-winning documentary film producer Julianne Donofrio at The Iowa Quilt Museum. Julianne is delightful, thoughtful and has captured a wonderful true story about those quilt blocks we see on country barns. Pieced Together is about barn quilts, but the underlying story is about the foundational love and respect between mother and daughter, breast cancer, life after job loss and an enterprising idea. The story is uplifting, and yes, I blinked back a few tears. In my mind, this is also the story about the power of one. Watch for Pieced Together playing at guilds and sewing & quilting events. You will want to grab your quilt and nonquilty friends to watch this stirring film trace the clothesline across America, Canada and beyond…

Julianne Donofrio Do you remember your first time? You were driving along and suddenly, you passed a barn with a giant painted Quilt Block! When did this start happening? What is a Quilt Trail? How many are there? Is this an organized thing? Who made the first one? And why? These may be questions you’ve asked yourself in the last couple of years, as the phenomenon of Quilt Blocks on Barns has been spreading across the country . . . . But, whereas most of us are content to ask each other these questions, Julianne Donofrio decided to dig a little deeper. The award-winning documentary producer spent six years making Pieced Together, a documentary about Donna Sue Groves from Adams County, Ohio. And it should be no surprise that the phenomenon of Quilt Blocks on barns began, like every good

thing in the history of the world, as one woman’s idea . . . in this case, Donna Sue Groves. Recently, Rhonda Pierce and I (Rita Farro) had the opportunity to attend the Iowa Premiere of Pieced Together in Winterset, Iowa, the home of the Iowa Quilt Museum. Meeting Julianne Donofrio for the first time was like getting together with a cousin you didn’t know you had. She brings her own comfort level into the room, and into every conversation. You feel connected, but she is more interested in hearing YOUR story than in sharing her own. However, we were determined to find out how a person becomes an Award-Winning Documentary Producer . . . .

Julianne’s Story I’ve always wanted to be a storyteller. One of my earliest memories (3 or 4 years old), is of sitting at my baby blue and white Holly Hobbie desk in the corner of the kitchen while my Mom prepared dinner. I would sit there and “do my work,” proudly drawing pictures and swirls that stood in for words. Mom would ask me to read it to her, and I would go on and on, until finally “The End.” I’ve always loved to read and that was something that was imparted to me by my parents. My mom was a teacher for over 40 years and my father was an engineer.

My Uncle Ed worked at NBC News and when I was about eight years old, he took my brother and me on a tour of the NBC studios at Rockefeller Center. We got to sit at the news desk of the Today Show. We pretended to read news stories while the crew kindly put the cameras on us so we could see ourselves on the monitors. I was hooked. I knew I wanted to work in television. Syracuse University had one of the top journalism schools and I dove in, taking multiple internships and working at the student television station. After graduation, I got a job as a Desk Assistant at ABC News in Washington, DC. It was the year before a presidential election. Once again, I was hooked.

I thought I wanted to be an on-air reporter, but I realized that all the things I loved to do — go out in the field with a camera crew, meet people, write stories, do research, put it together in an edit room, rush it to get on the air — so much of that is done by a producer. I was with ABC for over ten years. One of the proudest moments of my career was winning the Peabody Award for a special Nightline episode about two burn survivors and their rehabilitation after the September 11, 2001 attack on the Pentagon. It wasn’t an easy story to tell, but an important one. I worked with an amazing husband and wife team, Paul and Holly Fine, who filmed and edited every story they did. Working for them was my grad school, and I’m grateful to have them as mentors.

But the news business was changing, from streaming to constant breaking news. I wasn’t getting to do what I really loved: tell stories. In the Fall of 2008, I took a leap of faith and left ABC to work as a consultant. The summer of 2009 was the height of the recession. I partnered with an old college friend to start a website where we would put up short videos and photo essays about how people across the country were dealing with the recession. It was called The Hardest Year (the site no longer exists but a few videos are still on YouTube).

One day we got lost on a two lane road in Eastern Tennessee and pulled over in front of an old barn. That’s when we spotted this painted square hanging on the barn. “What’s that?”

from Adams County, Ohio. They had turned their website pink because they were raising money to help Donna Sue pay her bills as she was battling breast cancer and had lost her job.

I looked at it, and my mom being a quilter, said “it’s a quilt square.” But then I asked myself, what was it doing there? So I pulled out my old BlackBerry and Googled a bunch of words, something like: quilt on barn Tennessee.

I was hooked! This was a story! I reached out and after a couple of weeks, was in touch with Donna Sue. She said to stop on by whenever we were in Ohio.

This was 2009 and not much came up on Google. But one hit that did come up was the website for Garrett County, Maryland. They said that it was a barn quilt, that they had built a trail, and that the woman behind the idea was Donna Sue Groves

Initially, her story was a five minute video that was put on YouTube. But I spent hours interviewing Donna Sue instinctually knowing that there was much more to her story. The same with her mother, Nina Maxine Groves, a celebrated quilter. My visit lasted only a few days, but leaving was hard.

Donna Sue 2010 Governor's Awards for the Arts in Ohio

Donna Sue was crying and I was crying. Donna Sue and Maxine In 2010, I approached her about doing a documentary about reminded me so much of myself and my mother. her and the trails. She agreed because of the connection we had. I was touched and honored that she trusted me with her As a journalist, you try to keep distance between yourself and story. your subjects. That was almost impossible to do with Donna Sue and Maxine. I just love them both. I did work very hard to I returned to Adams County to interview Donna Sue and remain objective about their story and hope that is reflective Maxine several times. I knew there were moments I wanted to on the screen, but they are both in my heart. capture: when she was honored with the Governorâ&#x20AC;&#x2122;s Awards for the Arts in Ohio; when she hosted the first Quilt Trail Gathering; After a few more months on the road, I completed my trip following her for a doctorâ&#x20AC;&#x2122;s visit; and when Adams County and time with The Hardest Year. Donna Sue stayed with me, hosted an appreciation day in her honor. though.

Pieced Together has been my labor of love, my passion project. I was told that documentaries often take ten years so I feel good coming in under the wire. I started filming in 2010 and premiered at the second Quilt Trail Gathering held in Greeneville, TN in 2016. The film has been in seven festivals and I went by myself to California, Iowa, Illinois and Maryland and won two awards. I am now screening the film in front of groups filmed these other elements. I also edited the documentary. across the country. Each of these trips introduced me to new people whose lives were impacted by the trails. I saw what their friendship had done for Donna Sue, encouraging her to get up every morning even when her energy wasnâ&#x20AC;&#x2122;t great after chemo treatments.

I love talking with people. I believe one of my natural talents is putting people at ease and they open up. Even still, I never expected to meet such an incredible array of kind and generous people as I have through this project. Quilters are really the nicest people!

I’ve learned so much through making this film. I was used to having a network behind me, with the resources and money to tell a story. This has been a real grassroots effort. I held a successful Kickstarter campaign in 2013 which went towards music and graphics, but the rest has been out of my pocket. A note to anyone starting a project of this magnitude: get outside funding! Seriously, though, this movie had to be made and even though I didn’t know the business side in the beginning I'm glad I jumped right in.

I think I will be the “quilt lady” for a few years, even though I don’t quilt. People share articles with me about quilt stories all the time. I love it! That means they’ve been touched by Donna Sue’s story and that is why I do this. I want to make sure when you’re talking about how much you love barn quilts you know where they came from and who started it. I want to put “Donna Sue Groves” on the lips of every barn quilt fan out there!

The website for the film is www.piecedtogetherdoc.com. The website has a form people can fill out if they are interested in hosting a screening, and there is also a Google map that shows over 330 trails across the US and Canada, mostly organized by county. This is free for anyone to use and update. It can even be embedded on their own website. Pieced Together is also on social media: Facebook - http://www.facebook.com/piecedtogetherdoc @QuiltSquareDoc - https://twitter.com/QuiltSquareDoc Pinterest - http://www.pinterest.com/piecedtogether/ Instagram - http://instagram.com/piecedtogetherdoc For updates on how you can see the film, or to be added to a periodic newsletter with updates and information, email Julianne at: piecedtogetherdoc@gmail.com Here is a link to the trailer: https://www.youtube.com/watch?v=zwokgoWGIFA