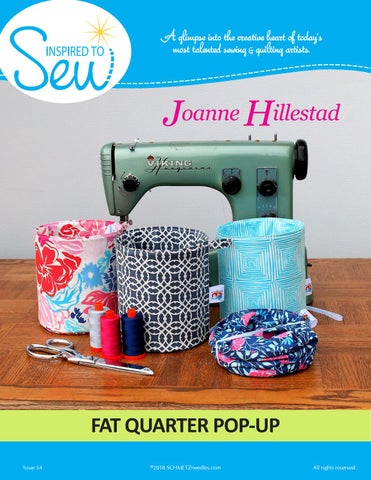 A glimpse into the creative heart of today’s most talented sewing & quilting artists.

In this Issue: Sewing Stars:

The Pop-Up that Started It All . . . Fat Quarter Gypsy Pop-Ups

Rhonda and Joanne Hillestad May 2018 International Quilt Market Portland, OR

Ideas can Pop-Up at any time. An intriguing idea intersecting with a serendipitous conversation, a wire-y husband, International Quilt Market and an insatiable appetite from eager buyers, quickly launched the success story of a million dollar idea. Meet Joanne Hillestad, inventor of the wildly popular Pop-Up. Joanne’s journey includes a health diagnosis that no one wants. With backbone, grit and the support of family and friends, Joanne inspires us to more forward and create. Although Joanne does not say this, her story illustrates “Pop-Up for Life!” Sew SCHMETZ & Grabbit® Too!

Joanne Hillestad, of Fat Quarter Gypsy, has a motto: “Life is too short not to have chickens.” Eleven years ago, Joanne was diagnosed with breast cancer. After undergoing surgery and chemo, she says, “Something like that impacts your life. No way around it. It took me a few years, but I finally stopped worrying about how long I was going to live and started focusing on enjoying life, my family and all the happy things around me. In 2013, I woke up on my birthday and my first thought was to follow my dreams! I called my husband, Mike, and told him I was going to start designing quilts! He said GREAT!” So , what do chickens have to do with designing quilts? Joanne always wanted chickens. She yearned for chickens! She felt

like her life was not complete without chickens. But, even though they live on acreage in the country — her husband was not on board with the whole chicken thing. Shortly after Jo’s “follow my dreams” epiphany, Mike went out of town. That usually meant Jo would paint a room or dig up another section of the yard for a new garden. But, this time , she contacted a young man who was looking for a home for chickens from his 4-H project. When Mike got home, Joanne calmly introduced him to Phyllis, Bob Ross, Buffy and Jane. Joanne and Mike have been married for 24 years, and they have two sons, Ryan (21) and Nick (19). They live in Stacy, Minnesota on 55 acres of mostly swamp. “It is a little heavy in

the mosquito department . . . but we love it.” Besides Jo’s beloved chickens, they also have Bugsy, their faithful golden retriever, and two cats — Sam and Barney. Joanne worked as a database/business analyst for 22 years, but her creativity impacted her life every day. “I became known as a problem solver. When a complicated project presented itself, my boss would sometimes ask me, ‘can you sleep on it?’ I would consider the issue and often figure out the steps needed to help solve the problem.” Being creative has always been at the center of Joanne’s life. She loves to garden — she has way too many flowers and every summer grows enough vegetables to feed an army.

She also loves nature photography, camping with her family, and glamorizing her vintage camper (Shirley). But sewing has always been her #1 hobby. “My mom taught me to sew when I was five. We made a red and white striped pillow. I was instantly hooked. I sewed a lot of clothes from middle school through high school including my prom dress. After I became a mom, I sewed clothes for my boys. They had overalls for every holiday. I also made a variety of storage solutions for cars, LEGO bricks, coloring, etc. I cannot imagine my life without sewing.” She was in her 30’s when her mother-in-law introduced her to quilting. “My first two quilts were hilarious. I cut all the pieces with scissors and had no clue about using a ¼" seam allowance.”

But it really didn’t matter. Jo was in love . . . she had found her passion. For many years, Joanne has attended a Girl’s Weekend with a small group of friends. In the beginning (10 years ago), Jo was the only one sewing — everybody else was scrapbooking. Jo loved to bring her sewing machine, and a basket of fabric. She would experiment all weekend, putting together different combinations and patterns. During those retreats, her friends were always saying, “You should design quilts! You should start a business!!” On the morning Jo had the “Follow Your Dreams” epiphany, it was like somebody hit her in the face. That day she created her business — The Fat Quarter Gypsy.

The Fat Quarter Gypsy took up residence in the upstairs of Mike’s wire forming business, Nu Design, in Pine City, Minnesota. Their building is an old dairy creamer and dance hall from the 1920s. It even has a ghost named Ed. Jo and Mike car pool to work every day and they take their dog, Bugsy, along. The Fat Quarter Gypsy has a lot of space — including an office, a longarming room, a sewing room and a big storage room. The Fat Quarter Gypsy was doing fine. Joanne was designing quilt patterns, she had a website, and she was building a customer list of independent quilt shops. She attended business workshops and met other quilt designers. Her business was growing. THEN, as often happens in this life, there was a moment of convergence that nobody saw coming. Issue 54

At a business summit, one of the sewing industry distributors (Checker) handed out a pre-made Pop-Up scrap bin. Joanne took a look at it and said, “My husband can make these.” The buyer from Checker said, “If your husband can make these, you need to write a pattern and we will sell them like crazy.” When Joanne went home, she presented the idea to Mike, who said, “Are you trying to kill me?” But, intrigued, Mike’s father came over, and the two of them tried to figure out how to make the spring. It needed to have a particular shape so it would lay flat at the top and bottom. It took about three weeks to figure it out and modify an old piece of machinery to do the bending properly.

While the guys were doing that, Joanne was trying to write her first dimensional pattern. She had only been writing patterns for two years — and she’d only designed FLAT patterns. In May of 2015, only six weeks after her first conversation about Pop-Ups, The Fat Quarter Gypsy went to Spring Quilt Market with the Pop-Up pattern. That first Pop-Up was 6" tall, and 5½" in diameter, and it used a fat quarter of fabric. Now, three years down the road, there are over 20 Pop-Up patterns and projects — larger sizes, the mini (which fits in a drink holder), Easter baskets, pet bowls, wind socks, etc.

Joanne says, “Pop-Ups are by far my most popular product. They are silly fun. I feel so humbled by the number of people who love making Pop-Ups.” From the beginning, Joanne’s logo for the Fat Quarter Gypsy has been a brightly painted camper. On her website, you can take a video tour of the glamorization of “Shirley.” Joanne says, “Shirley is all my sister Diane’s fault. She had an old trailer named Lena that she glamorized and took all over the state camping with her kids. I thought it was so much fun that I had to do it! I scoured the classifieds until I found a 1974 Airstream Argosy. That was almost seven years ago. The Argosy line of Airstreams were painted instead of the traditional aluminum. I just had to fix her up and paint her to look like my logo! However, she was a

mess. I ripped out everything soft, pulled up the subflooring, tore out the bathroom. Then I slowly built her back into something. I replaced the electrical and plumbing myself. I learned how to install laminate flooring (sort of . . . it has a few issues). Every surface had to be painted. I’m finally at the stage where I get to start sewing cushions, curtains, etc. My husband Mike painted Shirley. He did a fantastic job! It took months to fill in all her dents and imperfections . . . but she is looking pretty fine now!” Being a designer in the quilting industry can be a very solitary job. Joanne credits much of her success to the relationships she’s built with other quilt designers and business women. She first met Kris Poor (Poorhouse Quilt Designs) at a Creative

Arts Business Summit in Virginia. Joanne and Kris hit it off immediately, and eventually became accountability partners. Joanne says, “Having someone to bounce ideas off of, share the joys (because everyone needs that someone who you can tell anything too), and share the lows too, gives me perspective and keeps me on track. Kris has influenced many of my new designs. She has lots of great insight and ideas, and isn’t afraid to tell me when I’m going in the wrong direction. Kris and I have each other’s back. We list our goals for the day and then report our completions to each other. This year, our booths will be side-by-side at Quilt Market, which means we can watch over one another’s booth so the other person can grab a sandwich or take a restroom break.

Being able to bounce ideas off another person is invaluable to me. I love the thrill of problem solving some new design or item. That is probably my favorite part. I also love brainstorming new ideas. Most of them don’t make the cut . . . but it is fun to let the creative juices flow. You just never know what might pop into my brain! ” http://www.fatquartergypsy.com/

Sewing Machine Needles Donâ&#x20AC;&#x2122;t Last Forever!!! The needle is not a permanent machine part. Needles get dull from use. Needles are meant to be changed.

Ideas can Pop-Up at any time. An intriguing idea intersecting with a serendipitous conversation, a wire-y husband, International Quilt Marke...

Ideas can Pop-Up at any time. An intriguing idea intersecting with a serendipitous conversation, a wire-y husband, International Quilt Marke...