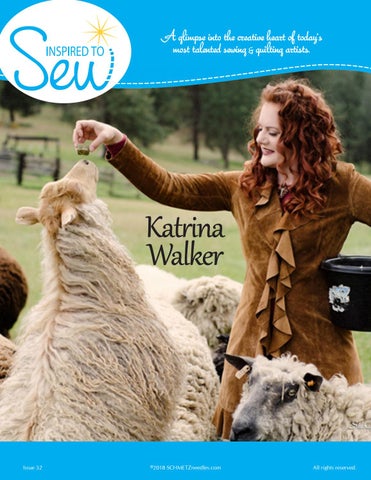 In this Issue: Sewing Stars:

Katrina Walker’s irresistible beauty magnifies her love of sewing with natural fibers. With love and mastery, Katrina’s classes are in demand online and sell out at sewing venues. Katrina knows natural fibers, with a fondness to wool. Katrina raises and spoils her own flock of sheep and spins their wool to our delight. Yes, wool with personality! Rita Farro’s interview unveils Katrina’ s journey from farm girl to investment banker to natural sewing authority that never outgrew her love of wearing cowboy boots. Sew SCHMETZ & Grabbit Too!

Katrina Walker has earned a reputation in the sewing industry as an exceptional teacher with a keen eye for design. She travels all over the country, teaching classes at consumer sewing shows and events. She especially loves teaching online, and has classes with Taunton Workshops, BurdaStyle Academy, Craft Daily, and Craftsy. She says, “Coming from an isolated rural upbringing, it is especially meaningful to me to share the love of sewing in homes where they might not otherwise have access to sewing education. It’s amazing to have students all over the world.” So, how does a little girl who grew up on a remote wheat farm, loving clothes and horses in equal measure — decide to become an investment banker? And after all that — how is

it that she finds bliss making her living as a respected sewing professional? Katrina says, “Nobody could be more surprised than me . . . “Sewing is part of my heritage; I guess you could say that sewing is in my blood. When I was young, I spent a lot of time watching my mother lay out fabric and put garments together. She wasn’t interested in formally teaching me but she certainly provided an excellent example. I grew up on our family wheat farm in eastern Washington State, where roads drifted shut during the winter. I never thought of sewing as a special activity; it was something you did to pass the time enjoyably during the long, dark, winters.” Katrina calls herself a clotheshorse. As a child, she often got in

Katrina’s online classes: Threads/Taunton Workshops, BurdaStyle Academy, Craftsy. trouble for running out to the corral to hug her pony, wearing her best dress (but always in cowboy boots!) There is a picture of Katrina, age two, wearing her first “little black dress.” Her Mom bought it at Macy’s during a trip to New York, and she found black patent shoes with trim that matched the dress. Katrina insisted to the photographer that those shoes must show in the portrait. In the 80’s, stirrup pants and knit tunics were all the rage, so Katrina used her mother’s new serger to whip up all sorts of trendy, stretchy clothes. She also had to sew skirts and blouses for various choir commitments, so she got a well-rounded introduction to garment sewing and fitting.

Katrina was probably the only student at Wellesley College who brought a sewing machine on campus — but it was after graduation when her machine got a real work-out, and her sewing skills were raised to a new level. After she moved to Washington D.C. to start a career in investment banking, she needed a high-end work wardrobe. But, even if she could afford to buy one, at 5’10”, it wasn’t easy to find clothes that fit. G Street Fabrics was nearby, so she found herself spending every weekend at her sewing machine, creating suits, blouses and cocktail dresses. This was the beginning of her love affair with beautiful silk and wool fabrics.

Katrina on the Sewing with Silk set with producer Marsha Elkins. Katrina never, ever, would have guessed she’d end up in the sewing industry, but the one thing she knew for sure was that she had no interest in being an investment banker. In 1997, she moved back to Washington State and found a job managing the Jefferson County 4-H program. 4-H has always played a big role in Katrina’s life. She grew up in 4-H raising hogs and competing with horses. As an adult, she was the superintendent or assistant superintendent of the state livestock judging contest for nearly 20 years. She also served on the State 4-H Fair Board and as superintendent for the State 4-H Fashion Revue. In 1998, she attended her first Sewing and Stitchery Expo in Puyallup, Washington. She learned about the Clothing and

Textile Advisor program (CTA). She applied for training and graduated that year. Her career path led from the 4-H program to teaching Family and Consumer Sciences, and then on to Nordstrom Product Group where she assisted in Technical Design and then worked as Raw Material Liaison. Throughout this time, she continued to volunteer as a CTA, little realizing how this involvement would change her life. In 2003, Katrina entered the Make It with Wool competition. Much to her surprise — she won the state adult division. Then, she received a phone call telling her she had won the national adult competition.

Sewing with wool and silk – I am a needle fanatic! Between doing a huge amount of fashion machine embroidery, and working with silk, wool, and other specialty fabrics – having the right needle is crucial to success. Wool isn’t terribly picky; a Universal needle is usually just fine. But for silk, it’s essential to use a fine sharp needle such as a Microtex needle, and to change it often, as the crystalline structure of silk dulls needles rapidly. I use a ton of Topstitching needles for embroidery; I prefer the sharper point for embroidering silk compared to a standard embroidery needle, which is fine for cottons and knits. I’m really excited about the new SCHMETZ NonStick needles and plan to try them for machine embroidery on wool with heavy wool thread. I think the enlarged eye and NonStick coating will be ideal for minimizing friction.

Another unexpected phone call nudged her toward a future in the sewing industry. She received a call from Joanne Ross, the director of the Sewing and Stitchery Expo. Joanne knew Katrina as a CTA volunteer. “Katrina”, she said, “I need a model [for the style shows].” The free style shows were always one of the highlights of Sew Expo, and Katrina knew they hired professional models to walk those shows. Katrina was flabbergasted by Joanne’s phone call, and responded that she did not have the necessary measurements for runway modeling. Joanne said, “You’ll be fine.” Then, she told Katrina where and when she needed to arrive for fittings. It was clear that Joanne was not going to take no for an answer.

Remembering that phone call, Joanne says, “I first met Katrina when she became a CTA volunteer. In 2004 we were short one model for our upstairs style shows. I knew Katrina was perfect for the position. She was tall and not only had the figure of a model, she had the swagger and personality. I was thrilled when she agreed to model because she added a whole new dimension to our fashion shows, and the sewing designers and celebrities loved working with her. She was as good as any professional model we ever hired. “Because she was an exceptional seamstress with an excellent work ethic — she was soon also teaching classes for Sew Expo.

What is Katrina sewing next? “I’ve watched Katrina blossom into an inspiring teacher, an author, and a textile artist. She is well known for her expertise and has written articles for many sewing publications. Most of all, Katrina is extremely creative and others are excited to learn from her.” Katrina’s quite unexpected and improbable entry into modeling at Sew Expo would be her catalyst into the sewing industry. She modeled garments for the biggest names in the sewing world — McCall’s and Simplicity, Pati Palmer, Martha Pullen, Linda Lee, Eileen Roche, and Dana Bontrager, among many others. That first year, Katrina was also asked to make appearances in her winning Make It With Wool ensemble. The sewing professionals saw that she was a sewing enthusiast, as

well as a model. Those first runway shows began professional relationships and mentorships that have lasted to this day. As a result of those relationships, Katrina became a sewing educator for Quality Sewing and Vacuum, and was invited to attend conferences to represent “young sewing professionals.” Other opportunities followed, and she was asked to design projects and write articles for magazines, i.e., CraftStylish, Stitch, Sew News, Threads and Creative Machine Embroidery. In 2011, Katrina and her husband, Scott, moved to a small ranch near Spokane, Washington. A guest house on the property became her beautiful new sewing studio. They have

A glimpse into Katrina’s country studio. a flock of natural colored sheep that are watched over by a team of loving and dedicated Livestock Guardian Dogs. Barn cats, a couple of horses, and a small flock of chickens round out their menagerie. They recently launched their online yarn store, Spoiled Sheep Yarn. You can see photos of their adorable flock and purchase yarn from individual sheep. People are amazed that the colors aren’t dyed. www.spoiledsheep.com Katrina says, “I’m definitely inspired by textiles. Textiles are truly my great love; this is why I mostly work with silks and wools. Being ‘animal’ fibers, they really seem to have their own life energy. I prefer designs that emphasize and highlight the beauty of the fabric, rather than the design itself. Life is too short and precious to sew boring fabric.”

Her beautiful country studio is clearly Katrina’s happy place — sewing on her beloved Pfaff sewing machines, now as a Pfaff Brand Ambassador. She continues to design and write for magazines, and has been published over 40 times. One of Katrina’s favorite quotes hangs in her studio: “Fashion can be bought. Style one must possess.” – Edna Woolman Chase (former Vogue editor). Katrina believes everyone should find their own “style” and not worry about fashion. That’s not to say that fashion should be ignored. Rather, that it’s best to pick and choose which trends work for you, and ignore the rest.

Look for the special exhibit: Pfaff Through the Ages.

Katrina made fashionable garments representing the respective era of Pfaff sewing machines. The first machine on exhibit is from 1862. Katrina made the above silk dupioni zonal waist (vest), tucked linen blouse and silk dupioni hoop skirt from Godeyâ&#x20AC;&#x2122;s Lady Book.

Needle P oints with Rhonda Thatâ&#x20AC;&#x2122;s not just a little piece of steel making your machine stitches. German engineering designs, calculates, tests and inspects the SCHMETZ needle. Take for instance the eye, did you know that needles have different eye shapes?

Katrina Walker’s irresistible beauty magnifies her love of sewing with natural fibers. With love and mastery, Katrina’s classes are in deman...

Katrina Walker’s irresistible beauty magnifies her love of sewing with natural fibers. With love and mastery, Katrina’s classes are in deman...