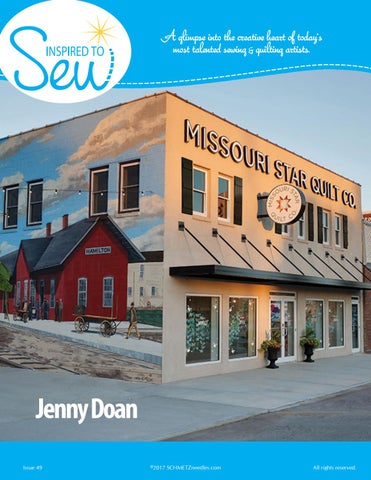 A glimpse into the creative heart of today’s most talented sewing &amp; quilting artists.

Quilting is a happy place for Jenny Doan. With love in her heart and a song on her lips, Jenny enters homes around the world gleefully teaching us how to quilt. Jenny is the real deal and gratefully acknowledges the blessings of family and millions of YouTube followers that catapulted Missouri Star Quilt Company into the stratosphere of the quilting, technology and business worlds. Jenny &amp; MSQC are wildly successful, but don’t let that fool you. Rita Farro’s interview reveals that tough decisions, tenacity and trust continue to be an integral theme to the hard working Doan family journey.

Jenny Doan and her family have revolutionized the quilt world. What will they do next? I’ll be watching with you! Sew SCHMETZ &amp; Grabbit Too!

Quilting is a Sweet Journey.

With hundreds of millions of YouTube views, Missouri Star Quilt Company is to quilting what Henry Ford was to automobile sales. Yes, it is THAT BIG . . . So, how did tiny Hamilton, Missouri, a sleepy little town full of abandoned buildings, become the highly unlikely epicenter of a world-wide quilting revolution? It was the 1990’s, and Jenny and Ron Doan were living in California, raising their seven children, Darrell, Natalie, Sarah, Hillary, Alan, Jacob, and Joshua. After realizing all her children learned differently, Jenny decided to try homeschooling. When she takes on a new job , she is 100% ALL IN. The school

district provided them with lesson plans, but her kids whizzed through the material. So Jenny added “themes” to their schooling. “If one of the kids asked a question about the space shuttle — that was it. We’d go to the library and get books about space. We’d make field trips to the local observatory, and they wrote reports on astronauts. Maybe two weeks later, one of the kids would be interested in whales — so then it was all about ocean life.” In 1995, Jenny and Ron decided it was time to leave California. Ron was a mechanic/machinist, and figured he could get a job anywhere there was a factory. For a more affordable quality of life they decided to move to the Midwest. Their oldest child

was in college, and their youngest was 8 when they packed up four vehicles and drove across the country to Hamilton, Missouri. When they arrived, they knocked on the door of a local realtor. He informed them that there was no motel in town, and it would take some time to find a rental house — so maybe they should just stay with his family until they could work things out. “They pulled out mattresses and took care of our family for a week until we found a place to rent.”

door, he said... You must not be from here...” But, by the third day, the kids were walking down the street with their new friends, with fishing poles over their shoulders.” Jenny told Ron, “you could just bury me here.” They found a rental house on a farm outside of town that hadn’t been lived in for years. Jenny cooked, canned, and had a garden. The kids could ride their bikes for miles, go fishing, or just play or explore around the farm. It felt like a dream come true!

On that first day, Jenny cried, “WHAT HAVE WE DONE? It felt like we had stepped back in time. There was one gas station, one blinking stop light. When I went to the grocery store, and a man carried my groceries out to the car. As I fumbled to unlock the

The first rental house didn’t even have a key. They lived in that home for five years, but by then all the boys had jobs and Jenny didn’t want to mow the lawn three days a week. So, in 2000, they bought an old Victorian that needed new plumbing, new wiring, a furnace . . . the renovation took two years. Ron Doan got a job as a machinist for a newspaper in Kansas City. By 2008, the newspaper had laid off so many people, Ron was back to working the night shift and his children believed their parents would soon be destitute. Their son Al called his sister Sarah and said, “we’ve got to get Mom a job. If we don’t do something — they’ll be living in our basements.”

At the same time, Jenny had made a quilt for one of her grandchildren (she now has 22), and told her son Al it would be “coming back from the long arm quilter in about a year.” Al: Jenny: Al: Jenny:

“Are you kidding me? Is that a thing?” “Yes, because all the long-arm quilt ladies are so busy, they have long waiting lists.” “Could you learn how to do that?” “Well, I suppose I could . . . .”

Al called Sarah and said, “We’ve got to get Mom one of those quilting machines.” The $40,000 quilting machine was too big to fit into the house, so they also bought an abandoned auto dealership building for $20,000. That was just the beginning . . . . Although there are many reasons for the skyrocketing success of Missouri Star Quilt Company, there were several key decisions that turned the quilt world upside down. First of all, Al decided to put his Mom on YouTube. He said, “YouTube will be our center for learning, Mom.” In 2009, not

many people had even heard of YouTube, and Jenny was very skeptical. But she went along with his crazy idea and the videos started going up on the internet. Making quilts has always been her happy place, so Jenny’s genuine enthusiasm and energy — combined with her love of performing and singing (she has a background in musical theater) made for some very entertaining, spontaneous “quilt tutorials.” In the beginning, they thought their viewers would be women who worked a lot of hours, and didn’t have a chance to shop or take a class. But those first letters were from handicapped women who couldn’t get out of their house . . . and they were afraid to try to navigate a wheelchair around the aisles

of a quilt shop. One letter Jenny received was from a woman in Iran, who wrote, “You have brought color into my war-torn world”. An agoraphobic man wrote to tell her he had started making quilts with his own two hands and felt for the first time that his life had meaning and purpose. In these letters it was clear the viewers wanted to BUY THE FABRIC. Unfortunately, the fabric was coming out of Jenny’s personal stash. “I had to tell them I bought it at a Ben Franklin store 14 years ago . . . .”

When Al was in college in Hawaii, he became addicted to a Deal Of The Day website, Woot.com. Even though he was living on a tropical island, when the Deal of the Day was a $30 down comforter, he could not resist. At the time, he barely had enough money for groceries, but he purchased that comforter and had it sent to Missouri. Because it was SUCH A GREAT DEAL!! Al was itching to do a Deal of the Day with fabric. But since the creation of the internet, quilt shops have struggled to sell fabric on line. It is cost prohibitive to scan in every single piece of fabric that comes into a store. Also, each quilt project

requires pulling and cutting eight different bolts of fabric (at least!). The employee hours required to do all that made online fabric sales very unprofitable.

But that certainly isn’t the end of the story. It soon became clear that Jenny’s fans wanted to come to Hamilton, Missouri. They wanted to see Jenny in person.

When precut fabric entered the scene, Jenny saw it like the “Lego®” blocks of quilting. This was their answer to how to sell fabric online. Jenny would do a YouTube video, and the viewers could buy two bundles of 10&quot; squares, and maybe two bundles of 5&quot; squares (or whatever, depending on the size), and they could make the EXACT quilt Jenny showed on YouTube. The bundles of precuts (which included every fabric in the designer’s line) would be one SKU — BOOM — Legos® for quilters.

When they opened their second retail store down the road on main street, Missouri Star had 45 employees. By 2015, they had 225 employees . . . and at this point, they have renovated 11 storefronts in Hamilton and employ ~400 people. Jenny laughs when she says, “We grew so fast, we hired just about every person in town who wanted a job. Hey, even with seven kids, our family couldn’t do it all. ”

For example, it soon became clear that the thousands of quilt fans coming to Hamilton needed a place to eat. Jenny says, “Our family didn’t have the bandwidth to operate a restaurant. So we bought the buildings, did the renovations, and looked for somebody to come run the business. We now have a bakery, a burger place and a fine dining restaurant.”

Although Jenny Doan is the face of Missouri Star, she always makes it clear that it wasn’t her idea, and that her children, Al and Sarah, are the owners. If you spend any time with Jenny, you soon realize she’s the real deal — humble and genuine in her approach and opinions. “My kids are amazing — look what they’ve done! I get to make new quilts, tell stories, and show up for the video tapings .”

Learning to Quilt is Fun with Jenny.

Missouri Star Quilt Company is proof that the American Dream is alive and well. MSQC is actively exploring ways to share their innovative business ideas with other quilt shop owners. MSQC has begun to wholesale their branded merchandise, and they also offer Retail Retreats in Hamilton for other shop owners.

“There is no better hobby than quilting because it changes us. Every quilter has a story, and every quilt has a story. You start doing it for yourself, then for your family and friends. Eventually you do it for charity — to give it away. It’s a sweet journey.”

The truth is, MSQC and YouTube have taught quilting to people who were NEVER customers of conventional quilt shops. But every MSQC YouTube viewer is a potential customer for a local quilt shop. Jenny says, “They would much rather find a shop in their own home town with a local mentor — and we’re delighted to help them make that happen.”

Do SCHMETZ Needles Work With My Machine? SCHMETZ works with all these sewing machine brands! SCHMETZ engineers work with sewing machine manufacturers around the world to ensure that the SCHMETZ needle performs properly in your home sewing, embroidery and quilting machines. Most home machines use needle system 130/705 H, so check your machineâ&amp;#x20AC;&amp;#x2122;s ownerâ&amp;#x20AC;&amp;#x2122;s manual or ask your machine dealer. Sew SCHMETZ!

Quilting is a happy place for Jenny Doan. With love in her heart and a song on her lips, Jenny enters homes around the world gleefully teaching us how to quilt. Jenny is the real deal and gratefully acknowledges the blessings of family and millions of YouTube followers that catapulted Missouri Star Quilt Company into the stratosphere of the quilting, technology and business worlds. 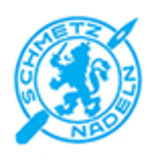