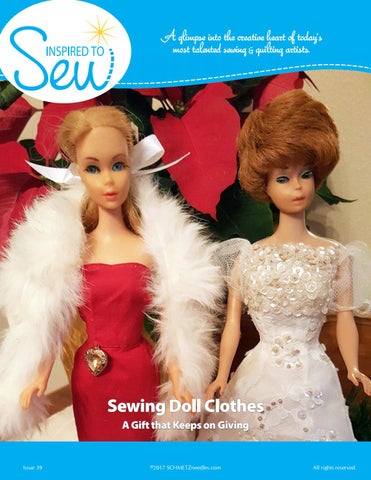 A glimpse into the creative heart of today’s most talented sewing & quilting artists.

Sewing Doll Clothes A Gift that Keeps on Giving

Barbie and me. Wedding dress made by Mary Luhrs.

Sewing doll clothes takes me, and maybe you too, along memory lane. My Mom made a whole wardrobe of Barbie clothes, some from outfits she had sewn for me to wear. Besides playing dress up, apparently, I also learned “left” from “right” as the bottom of Barbie’s feet are marked “L” and “R”. This winter my sister discovered a treasure of Barbie clothes in Mom & Dad’s garage. That got me thinking about the tradition of making doll clothes. As Rita Farro discovers, doll clothes are memory makers from Barbie to Cabbage Patch Kids to American Girl. Making doll clothes is a delightful tradition to share with those you love now and a heartwarming treasure later.

When I meet another woman who sews, I am meeting a new friend. We can ALWAYS have a conversation about sewing. Our current project, our favorite past project . . . our sewing plans for the future. Those sewing conversations always lead to stories about family and friends, because at its very core — sewing IS love. We sew, and then we give it away to people we love. That’s the point of it, really. The joy is in the giving. There is no bigger joy than sewing doll clothes for a child you love. . . . Mary Ann Wolsiefer of Michigan City, Indiana, writes, “When I was a little girl both of my grandmothers made doll clothes for me and my sister. Most of the clothes were made from clothes they used to wear. One grandmother even dismantled

her fur coat to make doll coats for us. We spent hours playing with our dolls. My mother followed in her mother’s footsteps, and she made Barbie clothes into her eighties. She gave them as gifts to the nurses who cared for her during dialysis. My mom is no longer with us, but I have carried on the family tradition. I make doll clothes for my granddaughters. Sometimes I recycle my own clothes. Their Christmas gift was a big box of doll clothes.”

In the Nineteenth century, dolls were an expensive luxury item made one at a time, with hand-painted porcelain faces. After WWI, dolls were mass produced and became an affordable girl’s toy for most families, but there was no such thing as a standard size. Until Barbie came to town. . . . In the 1950’s, Ruth Handler watched her daughter, Barbara, play with paper dolls and noticed that she often enjoyed giving them adult roles. At the time, most children’s toy dolls were representations of infants. Handler suggested the idea of an adult-bodied doll to her husband, Elliot, a co-founder of the Mattel toy company. He was unenthusiastic about the idea, as were Mattel’s directors.

During a trip to Europe in 1956, Ruth Handler came across a German toy doll that was exactly what she had in mind, so she purchased three of them. She gave one to her daughter and took the others back to Mattel. Handler redesigned the doll and named it Barbie, (after her daughter). The doll made its debut on March 9, 1959.

Serger-cally enhanced by Anne van der Kley. Entire garment including beaded midriff was made on a serger. Barbie’s hair was trimmed as she was a rescue doll.

The first Barbie doll wore a black and white zebra-striped swimsuit and was available as either a blonde or brunette. The doll was marketed as a “Teen-age Fashion Model,” with her clothes created by Mattel fashion designer Charlotte Johnson. The first Barbie dolls were manufactured in Japan, with their clothes hand-stitched by Japanese homeworkers. Around 350,000 Barbie dolls were sold during the first year of production. Barbie was one of the first toys to have a marketing strategy based extensively on television advertising. It is estimated that over a billion Barbie dolls have been sold worldwide in over 150 countries.

For 30 years, Barbie dominated the market . . . until she got ambushed by the Cabbage Patch Kids. Xavier Roberts, a 21 year old art student, created a line of soft sculptured dolls utilizing the quilting skills he learned from his mother and the historic technique of “needle molding.” He called these hand-stitched, one-of-a-kind, soft fabric sculptures “The Little People.” His Little People were “adopted,” each with their own individual name and birth certificate. The Little People were first offered at arts and crafts shows.

The name change to Cabbage Patch Kids was made in 1982 when Xavier’s company, Original Appalachian Artworks, licensed a smaller version of the handmade creations to a toy manufacturer named Coleco. They used the same marketing strategy of producing one-of-a-kind “looking” dolls, each with their own given name and adoption papers. During the l980’s, Cabbage Patch Kids became a worldwide phenomenon that caused actual riots during the Christmas shopping season. The doll brand became one of the most popular toy fads of the 20th Century. By 1999, 95 million Cabbage Patch dolls had been sold worldwide.

The NEXT Big Thing in the doll world almost didn’t happen. In 1984, teacher Pleasant Rowland and her husband visited Williamsburg, Va. “I loved the costumes, the homes, the accessories of everyday life — all of it completely engaged me. I remember sitting on a bench in the shade, reflecting on what a poor job schools do of teaching history, and how sad it was that more kids couldn’t visit this fabulous classroom of living history. Was there some way I could bring history alive for them, the way Williamsburg had for me?”

A few months later, Rowland went Christmas shopping for her nieces, then 8 and 10. She wanted to get them each a doll, but she found that her only options were Barbie and Cabbage Patch Kids. “Here I was, in a generation of women at the forefront of redefining women’s roles, and yet our daughters were playing with dolls that celebrated being a teen queen or a mommy,” she said. “My Williamsburg experience and my Christmas shopping experience collided, and the concept literally exploded in my brain. A series of books about 9 year-old girls growing up in different times in history, with a doll for each of the characters and historically accurate clothes and accessories with which girls could play out the stories. In essence, I would create a miniature version of the Colonial Williamsburg experience and take it to

American girls using the very playthings — books and dolls — that girls have always loved.” Everybody hated the idea. Unable to attract investors, Rowland used her savings and retirement fund to produce the first American Girl dolls. At first available only by mail order, the dolls were introduced in September 1986. The company made nearly $8 million in its first 12 months and $30 million in 1989.

Dolls 'n More My friends and I are a group of ladies who sew doll clothes for little girls in shelters, etc. Most of the ladies belong to the American Sewing Guild. “Dolls 'n More” is starting our 7th year making “American Girl” clothes. We make 110 sets to be donated for Christmas. This year’s collection consist of a skirt, jeans, leggings, two tops, a dress, nightgown, coat and a hat. We also make a bag for the doll and clothes to be stored in and carried along with a sleeping bag for the doll. We ask our friends to buy shoes and the Springfield dolls that look just like the American Girl dolls. Around Christmas, we place a doll in the bag along with the clothes, two pairs of shoes and a sleeping bag. We donate the dolls to non-profit organizations. We love to know that we are making little girls Christmas’ a little brighter. We sew at the Northborough Senior Center, Northborough, MA two Tuesday nights a month. Quote & Pics (l & r) provided by Rosemary O’Koren.

Originally, the American Girl dolls focused on various periods of American history. The brand eventually expanded to provide the option for girls to purchase dolls that look like them. The Truly Me dolls offer various choices, including eye color, eye shape, skin color, hair texture, and hair length. American Girl became a retail/merchandising phenomenon. In 1998, Pleasant Company became a subsidiary of Mattel, and this doll continues to dominate the market. American Girl products are sold through catalogs, its website, and about 20 stores. Twenty-seven million dolls have been sold since 1986.

Whatever size doll you are sewing for — you can be sure there is a wide range of patterns available. Since the early 1940’s, pattern companies have produced patterns for doll clothes. The sizes have changed slightly over the years due to the size and popularity of the doll, but the love for dressing a childhood friend has never changed. According to Carolyne Cafaro, SVP/Creative Director for The McCall Pattern Company, “doll clothes are an important part of our business. We incorporate them into three of our brands: McCalls, Butterick and Kwik Sew. They are especially strong in December, January and February as little girls have received their new dolls and want to dress them up.”

“The clothes fall into three areas: children’s clothing with a matching doll, historical doll clothes and modern doll clothes. The Mommy and Me idea matches exactly the doll to the child. We typically use a four year old as the model and the models are thrilled with their doll photo mates. Our Retro and modern packages usually consist of 4 to 6 outfits for the doll — sometime themed, sometime seasonal. We also produce packages with doll accessories like shoes, hats, etc. and carrying bags. Tents, chairs and pets have also been created to complete a dolls world. We also have packages for the 11” doll and some baby dolls, however, the 18” is by far the strongest category.’’

Sewing doll clothes for a child is, truly, a gift that keeps on giving. Whether your little girl is playing with her beloved doll, dressing it up, wearing a matching outfit, or having lunch at the American Girl tea room . . . the doll clothes you made become a part of so many treasured moments in her life. And then — one day in the distant future — you’ll be long gone . . . but your now-grown-up-girl might just open an old suitcase full of the doll clothes you made for her. And she’ll get it. She’ll see the stitches, recognize the fabric, understand the love . . . and she’ll feel it all over again. — written by Rita Farro

There is no bigger joy than sewing doll clothes for a child you love. In the Nineteenth century, dolls were an expensive luxury item made on...

There is no bigger joy than sewing doll clothes for a child you love. In the Nineteenth century, dolls were an expensive luxury item made on...