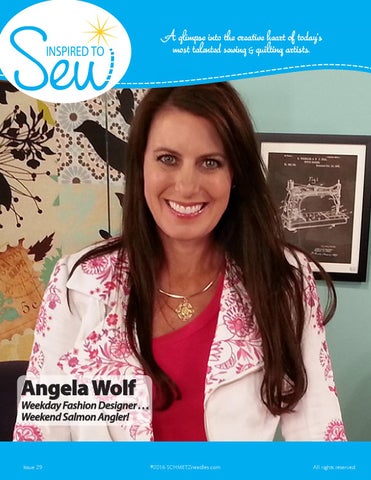 At last the SCHMETZ Android version is available! Just go to Google Play and search for SCHMETZ needles. My favorite app feature is the list of over 80 fabrics. Just click a fabric and a SCHMETZ needle suggestion pops up. Check it out! There’s a lot of information packed in this free app. You probably met Angela Wolf already on-line. Angela’s sewing world is diverse and so is her personal life. Enjoy this glimpse into Angela’s creative and competitive life filled with a zest for sewing and sports. As Angela would say, “It’s Sew Easy to be Inspired to SEW!”

Angela on the set of It’s Sew Easy.

Angela Wolf, anchor of the PBS series It’s Sew Easy and host of Craftsy’s new sewing channel on YouTube, is a fashion designer and founder of ABO Apparel and Angela Wolf Pattern Collection. She wrote the book, How to Start a Home-Based Fashion Business. She is also a spokesperson, blogger, and has contributed to both Threads and SewStylish magazines. Angela enjoys sharing her passion for fashion sewing and was voted 2012 Teacher of the Year by the American Sewing Expo. The oldest of 5 children, Angela’s mom always had a craft going: needle point, rug kits, paper crafts, cake decorating — there was a big variety. But sewing was Angela’s favorite. She made her first outfit (skirt and vest) at summer camp when

she was 11. Even though she was the biggest tom-boy ever, she chose to make a skirt and vest. Angela recalls, “I was obsessed with fashion sewing and design. When I was a sophomore in high school, I snuck some vibrant red fabric out of my mother’s stash. I lay on the fabric and my sisters drew around me with chalk. The result looked more like a crime scene than a fashion pattern. But I used their chalk markings to sew and fit the cutest dress. I wish I’d kept it! I always loved math (which really comes in handy), so I started college with an engineering degree in mind. Instead, I graduated with a business degree as that seemed more applicable for

entrepreneurship. During college, my old Singer machine went with me from dorm room to dorm room to apartment, and I designed clothes for myself and others. My sewing machine died two weeks before graduation. As a gift, my family gave me a brand new sewing machine and serger. Their idea was to satisfy my ‘hobby’. Little did they know those machines would launch my career. I could hardly wait to do what I knew I was meant to do . . . Fashion Design.“ After graduating, Angela moved to Saint Joseph, Michigan and studied everything she could about Fashion Design: Couture sewing, fitting, flat pattern making, draping, and designing for various body shapes. She designed a collection

with 16 garments and invited all the women she knew to an informal fashion show at a local restaurant (offering free wine). That night was the launch of her custom apparel business, ABO Apparel. Many of her clients wanted her to alter their ready-to-wear garments to fit like the custom clothing she designed for them. Although Angela felt that asking a fashion designer to alter clothes was like asking Picasso to paint your bathroom, she took on alterations because it paid well. Also, she felt every woman, no matter her size, deserved well-fitting garments. She soon realized the bonus to doing alterations on designer garments (Chanel, Armani, Escada, etc.) was that

she could learn from the masters. As she pulled them apart, she could clearly see how these fine garments were interfaced, underlined, understitched, staystitched, and so much more. In 2008, Angela entered the Passion for Fashion design contest at the American Sewing Expo in Novi, Michigan. The contest was similar to an episode of Project Runway, except it was live and on the show floor of a very busy consumer sewing show. The contestants were given a challenge, and then shopped for fabric from show vendors. They created their garments with thousands of consumers watching their every move. During the final Fashion Show, Angela was declared the winner. It was a game changer.

Until that moment, Angela didn’t even know there was a “sewing world” out there. She had never attended a consumer sewing show and her victory at the American Sewing Expo (ASE) was a turning point. The following year she exhibited a large display of her couture designs and the year after that Angela was invited to teach. In 2012, she was awarded the ASE teacher of the year award. Angela looks back on her first 15 years in business as a sewing, fitting, and pattern designing bootcamp. After getting involved with American Sewing Expo, she realized she had a lot to share and she loved teaching. She developed several classes including how to sew your own designer jeans, hand

What are you wearing today Angela?

dying fabrics, how to sew with knits, and starting and running an alterations business. And now, thanks to PatternReview and Craftsy, she has over 77,000 students from all over the world.

Angela’s credibility for It’s Sew Easy came from the fact that she designed and sewed all her own clothes. She started receiving viewer emails asking “what pattern was your top, or your jeans? etc.”

During this time, Angela met Kathie Stull, who was in the beginning stages of planning the PBS series, It’s Sew Easy. The concept was for a sewing show that focused on garment sewing. Angela was a perfect fit and she has been the anchor of the show for 6 years.

At that point, Angela made the decision to switch gears in her business. Instead of designing and sewing for individual clients, she invested in a new CAD software program and started Angela Wolf Pattern Collection — to create patterns for the home sewist.

Angela with 75 lbs. (well, we think it’s that big) of King Salmon Glory!

Her goal with the patterns was to offer a good fit with easy to follow directions no matter how complicated the design. She wanted the pattern printed on quality paper (easier to trace), with a spiral bound booklet with the directions so the booklet could fold back at the sewing machine. There would be a coordinating PDF file for the tablet users. Angela works from a 6,000 sq. ft. office/studio about 10 miles from her house. She tries to keep to a daily routine when she’s not traveling. Her first hour is shipping and answering customer emails. Her day might include some or all of the following — blogging, taping and editing video tutorials, testing new patterns, consulting, experimenting with

new technology on sewing and embroidery machines, or designing fabric. “Fabric inspires me to create and I have quite the stash. I design a lot of my own fabrics, although I don’t sell it on a mass scale, it’s on my short-term bucket list. From hand-dyeing, printing, embellishing with embroidery and quilting, the list goes on. It makes me sad to see so many fabric stores closing, as people buy online or they go to a store and find a better deal online. There is nothing better than touching and feeling the hand of the fabrics!” From April through September, Angela leaves the office on Friday to jump on board their boat the Win-n-Angel. Her

husband (his name is Winn) and she (sometime the Angel) fish professionally on the Salmon Tournament Trail on Lake Michigan. They are featured on the Salmon Showdown reality tv show. Brother is the official sponsor of their team. So, of course every team has embroidered jackets and hats. Angela is honored to be Brother’s official brand ambassador in the sewing world and humbled by the fact they believe in her enough to sponsor her fishing team in the sports world. “The phrase work hard, play hard sums up my life. I never stop working — even when I am laying in the sun on a beach — I am coming up with new embellishing techniques, new patterns, thinking about new technology on the machines, researching

new trends, new ideas for fabric designs. Years ago, my grandmother asked, ‘does your mind ever stop?’ Not when you love what you do! One viewer wrote and told me that watching It’s Sew Easy on Saturday mornings became her new routine after she lost her husband. She told me it helped her to work through the grief and inspired her to start sewing again. I am very blessed to have a career that I am able to grow in and inspire others to do the same.”

Angela’s “Go To” needle: Denim/Jean 90/14 needle. Denim needles are THE BEST not only for sewing designer jeans, but topstitching, sewing and embroidery on leather, suede, and vinyl. Topstitching tip: Sometimes it is difficult to find coordinating color topstitching thread. Instead I will use 2 or 3 threads of standard poly thread, run through the Denim/Jean needle 90/14. Change the stitch length to 4.0 and the topstitch looks very professional, as if you are using a thicker thread.

Angela’s “Must Have” needle: Stretch or Jersey needle. The Stretch and Jersey needles are a “Must Have” with all the knits I sew. I even use them in the serger for coverstitching — no more skipped stitches. Visit Angela at: www.AngelaWolf.com www.AngelaWolfPatterns.com www.ItsSewEasytv.com fashionsewingwithangelawolf.com/blog www.youtube.com/user/aboapparel www.facebook.com/AngelaWolfCouture www.instagram/angelawolffashion www.pinterest.com/angelawolfpins/ twitter.com/Angela_Wolf

Needle P oints with Rhonda There’s an App for That! The SCHMETZ App Here are the coolest features:

Click one of the 80+ fabrics, get a needle suggestion!

You probably met Angela Wolf already on-line. Angela’s sewing world is diverse and so is her personal life. Enjoy this glimpse into Angela...

You probably met Angela Wolf already on-line. Angela’s sewing world is diverse and so is her personal life. Enjoy this glimpse into Angela...