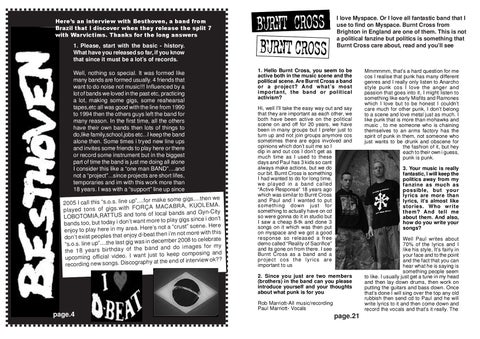 I love Myspace. Or I love all fantastic band that I use to find on Myspace. Burnt Cross from Brighton in England are one of them. This is not a political fanzine but politics is something that Burnt Cross care about, read and you’ll see

Here’s an interview with Besthoven, a band from Brazil that I discover when they release the split 7 with Warvictims. Thanks for the long answers 1. Please, start with the basic - history. What have you released so far, if you know that since it must be a lot’s of records. Well, nothing so special. It was formed like many bands are formed usually. 4 friends that want to do noise not music!!! Influenced by a lot of bands we loved in the past etc, practicing a lot, making some gigs, some reahearsal tapes,etc all was good with the line from 1990 to 1994 then the others guys left the band for many reason. In the first time, all the others have their own bands then lots of things to do,like family,school,jobs etc...I keep the band alone then. Some times i tryed new line ups and invites some friends to play here or there or record some instrument but in the biggest part of time the band is just me doing all alone I consider this like a “one man BAND”....and not a “project”...since projects are short lifes, temporaries and im with this work more than 18 years. I was with a “support” line up since r make some gigs....then we 2005 I call this “s.o.s. line up”....fo A MA CA BR A, KU OLE MA . play ed ton s of gigs .wit h FO RÇ of local bands and Gyn-City LOBOTOMIA,RATTUS and tons more to play gigs since i don’t bands too, but today i don’t want e’s not a “crust” scene. Here enjoy to play here in my area. Her eat then i’m not more with this don’t exist peoples that enjoy d-b december 2008 to celebrate “s.o.s. line up”....the last gig was in d and do images for my the 18 years birthday of the ban just to keep composing and upcoming official video. I want at the end of interview ok?? recording new songs. Discography

1. Hello Burnt Cross, you seem to be active both in the music scene and the political scene. Are Burnt Cross a band or a project? And what’s most important, the band or political activism? Hi, well I’ll take the easy way out and say that they are important as each other, we both have been active on the political scene on and off for 20 years, we have been in many groups but I prefer just to turn up and not join groups anymore cos sometimes there are egos involved and opinions which don’t suit me so I dip in and out cos I don’t get as much time as I used to these days and Paul has 3 kids so cant always make actions, but we do our bit. Burnt Cross is something I had wanted to do for long time, we played in a band called “Active Response” 18 years ago which was similar to Burnt Cross and Paul and I wanted to put something down just for something to actually have on cd so were gonna do it in studio but I saw a cheap 8-tk and done 3 songs on it which was then put on myspace and we got a good response so released a free demo called “Reality of Sacrifice” and its gone on from there. I see Burnt Cross as a band and a project cos the lyrics are important to us 2. Since you just are two members (brothers) in the band can you please introduce yourself and your thoughts about what punk is for you Rob Marriott-All music/recording Paul Marriott- Vocals

Mmmmmm, that’s a hard question for me cos I realise that punk has many different genres and I really only listen to Anarcho style punk cos I love the anger and passion that goes into it, I might listen to something like early Misfits and Ramones which I love but to be honest I couldn’t care much for other punk, I don’t belong to a scene and love metal just as much. I like punk that is more than mohawks and music , to me someone who is chaining themselves to an arms factory has the spirit of punk in them, not someone who just wants to be drunk and obscene for the fashion of it, but hey each to their own i guess, punk is punk. 3. Your music is really fantastic, I will keep the politics away from my fanzine as much as possible, but your lyrics are more than lyrics, it’s almost like stories. Who write them? And tell me about them. And also, how do you write your songs? Well Paul writes about 70% of the lyrics and I like his style, It’s fairly in your face and to the point and the fact that you can hear what he is saying is something people seem to like. I usually just get a tune in my head and then lay down drums, then work on putting the guitars and bass down. Once that’s done I will sing over the top any old rubbish then send cd to Paul and he will write lyrics to it and then come down and record the vocals and that’s it really. The

The pages are sorted so you can print it out on both sides of a paper to get a real fanzine. Download it as a pdf.