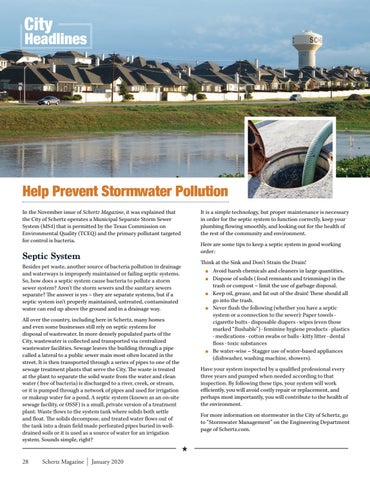 Help Prevent Stormwater Pollution In the November issue of Schertz Magazine, it was explained that the City of Schertz operates a Municipal Separate Storm Sewer System (MS4) that is permitted by the Texas Commission on Environmental Quality (TCEQ) and the primary pollutant targeted for control is bacteria.

Septic System Besides pet waste, another source of bacteria pollution in drainage and waterways is improperly maintained or failing septic systems. So, how does a septic system cause bacteria to pollute a storm sewer system? Aren’t the storm sewers and the sanitary sewers separate? The answer is yes – they are separate systems, but if a septic system isn’t properly maintained, untreated, contaminated water can end up above the ground and in a drainage way. All over the country, including here in Schertz, many homes and even some businesses still rely on septic systems for disposal of wastewater. In more densely populated parts of the City, wastewater is collected and transported via centralized wastewater facilities. Sewage leaves the building through a pipe called a lateral to a public sewer main most often located in the street. It is then transported through a series of pipes to one of the sewage treatment plants that serve the City. The waste is treated at the plant to separate the solid waste from the water and clean water ( free of bacteria) is discharged to a river, creek, or stream, or it is pumped through a network of pipes and used for irrigation or makeup water for a pond. A septic system (known as an on-site sewage facility, or OSSF) is a small, private version of a treatment plant. Waste flows to the system tank where solids both settle and float. The solids decompose, and treated water flows out of the tank into a drain field made perforated pipes buried in welldrained soils or it is used as a source of water for an irrigation system. Sounds simple, right?

It is a simple technology, but proper maintenance is necessary in order for the septic system to function correctly, keep your plumbing flowing smoothly, and looking out for the health of the rest of the community and environment. Here are some tips to keep a septic system in good working order: Think at the Sink and Don’t Strain the Drain! ■ Avoid harsh chemicals and cleaners in large quantities. ■ Dispose of solids ( food remnants and trimmings) in the trash or compost – limit the use of garbage disposal. ■ Keep oil, grease, and fat out of the drain! These should all go into the trash. ■ Never flush the following (whether you have a septic system or a connection to the sewer): Paper towels · cigarette butts · disposable diapers · wipes (even those marked “flushable”) · feminine hygiene products · plastics · medications · cotton swabs or balls · kitty litter · dental floss · toxic substances ■ Be water-wise – Stagger use of water-based appliances (dishwasher, washing machine, showers). Have your system inspected by a qualified professional every three years and pumped when needed according to that inspection. By following these tips, your system will work efficiently, you will avoid costly repair or replacement, and perhaps most importantly, you will contribute to the health of the environment. For more information on stormwater in the City of Schertz, go to “Stormwater Management” on the Engineering Department page of Schertz.com. 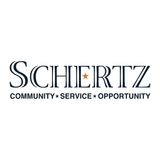 More from City of Schertz