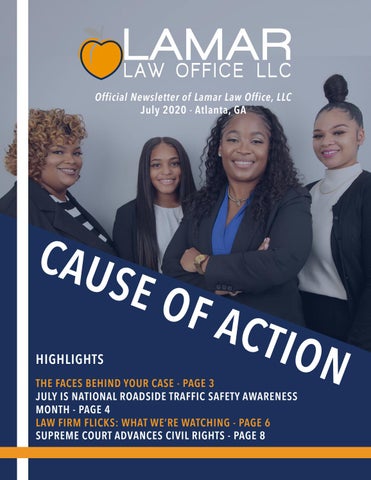 ATTORNEY LAMAR FEATURED In lieu of a letter, Lamar Law Office wishes to share an article from The Champion featuring Attorney Lamar.

There’s nothing new about liability waivers. They’ve been around for decades. Previously they were common for those taking part in high-risk activities such as horseback riding, scuba and sky diving as well as ziplining. Now waivers are popping up related to the COVID-19 virus and recipients are being asked to sign and waive any rights to hold individuals and organizations responsible should they contract the virus. Homeowners in a 1,000-plus home Stone Mountain subdivision recently received liability agreement waivers related to the community’s clubhouse, swimming pools, tennis courts and playgrounds and activities taking place at those venues. “I acknowledge and fully assume the risk of injury, illness or death related to COVID-19 arising from my participation in the Activity,” states the agreement in part. They are also showing up on some college campuses. Southern Methodist University is requiring student-athletes to sign COVID-19 liability waiver before returning to campus this summer. According to The Dallas Morning News, the document requires students to agree that they cannot hold the school liable for anything related to COVID-19 and waives the students’ right to litigation. It’s also been reported that some businesses such as hair salons and gyms that are reopening as a result of the pandemic are asking customers to sign liability waivers before receiving services. The Trump/Pence “Make America Great Again” Rally held in Tulsa, Oklahoma, June 20 had on its ticket registration website a notification stating, “By clicking register below, you are acknowledging that an inherent risk of exposure to COVID-19 exists in any public place where

people are present. By attending the Rally, you and any guests voluntarily assume all risks related to exposure to COVID-19 and agree not to hold Donald J. Trump for President Inc.; BOK Center; ASM Global liable for illness or injury.” Tucker attorney Anita Lamar said it’s difficult to predict how enforceable these new liability waivers will be. “This COVID-19 era is uncharted territory and whether people should be concerned about signing these waivers (the real question obviously being are they enforceable) is a difficult question to answer,” said Lamar. “The truth is we do not really know until a case is tried and appealed.” Lamar’s firm Lamar Law Office specializes in personal injury cases. “I can say that Georgia courts will not interfere in the freedom to contract,” she said. “A legal right can be waived by contract as long as it does not violate public policy, is entered voluntarily and the risk is known. The enforceability is specific to the facts and determinations will be case by case. Prior cases have permitted health clubs or gyms to utilize liability waiver agreements while denying landlords similar waivers. Reckless conduct cannot be waived.” Lamar suggests that when presented with a COVID-19 related liability waiver, individuals should study them carefully. “I would recommend thoroughly reading the waiver and completely understanding the rights that are being waived,” she said. “If there is language you do not understand, seek representation before signing. In the event that attorney representation is unlikely, forego visiting the location.

the faces behind your case With new team members in the office, Lamar Law Office had a team photo shoot. These are just some of the team members that take care of your case from start to finish. Get to know them on page six.

uring the “vacation months” of July through October, the temperature rises, and so do traffic fatalities. In the midst of Fourth of July activities and in the days surrounding this summer holiday, traffic fatalities climb to a yearly high. This is why the Pedestrian Safety Institute (PSI) and flashlight brand MAGLITE are teaming up in 2020 to promote this reality through National Roadside Traffic Safety Awareness Month. As an Atlanta personal injury law firm, Lamar Law Office, LLC wishes to do our part by spreading awareness about roadside safety in our city and state. In the past decade, the number of pedestrians killed by motor vehicles in the United States spiked by 35 percent. Georgia is the sixth most dangerous state in the nation to be a walker, according to this Dangerous by Design report. The following are the most dangerous roads in Atlanta for pedestrians, in order, according to the Atlanta Journal Constitution.

Law Office has collated some “best practices” for you to follow to avoid a tragic accident in the midst of summer.

Best Practices for Pedestrian Safety This Summer Exercise extra vigilance at night The night hours between 6 PM and 6 AM are the most deadly, with more than 50 percent of all crashes occurring within this timeframe. The fatality rate for crashes during dawn, dusk and night is double the daytime rate. Statistically, crashes that occur after midnight are four times more deadly. Given these grim statistics, drivers should keep watch for pedestrians on the shoulder, and put distractions away. Pedestrians would be wise to

invest in reflective clothing or a flashlight to draw attention to themselves when walking roadside at night. Don’t step out of your broken down vehicle on a highway Many roadside accidents happen on the highway shoulder when the driver of a broken down car steps outside of their vehicle. Unless otherwise necessary, drivers should stay inside their vehicles, pull as far away from the flow of traffic as possible, and call for help. Especially at night, warning signs such as hazard lights or other light sources should be used to warn oncoming traffic of your stopped vehicle. Finally, if it is absolutely necessary for you to exit your vehicle on a highway, you should stand as far away from the way of traffic as possible. Place your vehicle between yourself and the flow of traffic. Avoid walking on busy roads. If you must, follow these strategies for safety The best preventative strategy for accidents on busy roads is to avoid walking there altogether. Take the time to map out alternate walking routes. If you must walk on a busy road, use the sidewalk or path. If there isn’t one, walk on the shoulder, facing traffic, as far away from the flow of traffic as you can get. Don’t assume the driver sees you, and try to make eye contact. If walking at night, it is crucial to make use of safety devices like a traffic/safety wand, flashlight, and/or reflective clothing.

y awareness Be prepared Whether traveling by foot or car, you should have a dependable flashlight, traffic/safety wand, flares, or reflective triangles to mark your location. Frequently test your car’s hazard light function. As the MAGLITE brand says, “To be safe, be seen.” These tools and devices should be used even during the day to give drivers advanced warning of a problem ahead, and plenty of time to slow down or move lanes. Exercise good judgment regarding alcohol Drivers and pedestrians alike should avoid traveling on roads and

highways while under the influence of alcohol. During major summer holidays including Labor Day, Fourth of July, and Memorial Day, the percentage of fatal accidents involving alcohol nears 40 percent. Opting to stay the night at a friend or relative’s home could mean the difference between life and death for you or someone else.

always ensure you have a designated driver. Share this article and the above list of our city’s most dangerous roads with your Atlanta friends and relatives. Consider giving your loved one a safety device such as a traffic wand for their car. If you know someone who frequently walks or bicycles around our city, share this list with them, too. Lamar Law Office, LLC wishes you a safe and relaxing summer.

Summer is a time to reunite with friends and relatives. Whether you’re on vacation or on a night out, think ahead about your transportation. Plan walking routes with care, and

LAW FIRM FLICKS Here’s what we’re watching after work. Anita recently started streaming Black Monday on Hulu and SHOWTIME with her husband, and they have been enjoying it so far.

Myshae has been watching The Chi on Hulu and SHOWTIME, and Big Brother.

Alex has been watching Queen of the South on Netflix and How to Get Away with Murder.

Kayla has been watching Little Fires Everywhere on Hulu, as well as All American and Money Heist.

ast month, often celebrated as “Pride month” by members of the LGBTQ community, saw a victory in the Supreme Court.

On June 16, 2020, the Supreme Court reached a decision in the Bostock v. Clayton County case, which originated in Clayton County, Georgia. Gerald Bostock had been an official in the county’s juvenile court system since 2003, where he maintained good performance records. In April 2013, the county initiated an audit of funds managed by Bostock, and ultimately fired him. In early 2013, Bostock had joined a gay softball league and promoted within the department as a volunteer activity. Given the suspicious closeness of these two events, Bostock believed the company’s claim of “misspent funds” was an excuse to fire him for being gay. At the time of his firing, Georgia lacked laws protecting LGBTQ persons from employment discrimination. After a series of cases in lower courts, Bostock petitioned the Supreme Court for a writ of certiorari on the question of whether the word “sex” in Title VII of the 1964 Civil Rights Act, which bars employer discrimination based on sex, included sexual orientation. Before this point, courts had been conflicted on this question and different decisions had been reached. Some states included protection for LGBTQ persons, and others did not.

Because of the 6-3 decision in Bostock’s favor on June 16th, LGBTQ persons will be protected from employment discrimination in every state. The majority opinion was delivered by conservative-leaning Justice Neil Gorsuch. Interestingly, Gorsuch used Page 8

a conservative method of reasoning known as textualism to explain the court’s decision. He took the word “sex” and determined that, in fact, those who discriminate against LGBTQ persons are discriminating based on their sex (male of female.) Here is Gorsuch’s explanation: “An employer who fired an individual for being homosexual or transgender fires that person for traits or actions it would not have questioned in members of a different sex. Sex plays a necessary and undisguisable role in the decision, exactly what Title VII forbids.” Other conservative justices like Justice Samuel Alito pointed out that those who authored the 1964 Civil Rights Act did not intend “sex” to include LGBTQ persons, and that textualism takes into account the author’s intention. Despite this, the court ruled on the side of popular opinion. Many large corporations including Amazon, Disney, and Coca-Cola came out on the side of Bostock, asserting that expanding Title VII to include LGBTQ persons would not be “unreasonably costly or burdensome” to them.

The LGBTQ community celebrates this decision as a victory, knowing that in all 50 states it is now illegal for employers to discriminate against them on the basis of sexual orientation or gender identity. While many companies had already adopted this as a policy to avoid litigation, the law ensures discimination against LGBTQ persons can no longer take place unchallenged.

Some have raised questions about what it will take for employers and institutions to comply to this expanded understanding of “discrimination by sex.” Hundreds of federal and state statutes include the word “sex.” This case will likely have consequences for the policies pertaining to military and prison dress codes, sex-specific schools and universities, sports teams, and more. The question of religious objection was acknowledged by the court, but left unanswered. Lamar Law Office, LLC commends the Supreme Court’s decision as a step forward for the LGBTQ community. At the end of Pride Month, we await the legal consequences of the decision with hope that they will lead to a more fair and equitable society.

Do you want to show your support for racial justice from your car or laptop? Request Your Sticker From Lamar Law Office, LLC Email info@atlantalegalcare.com Page 9

More Than Legal Service... WE CARE. 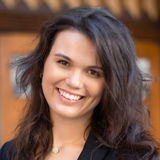