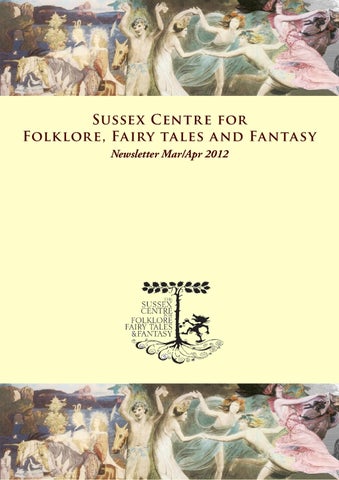 Visual Images in Liter ary Fairy Tales: in and behind the text Evening Public Lecture

e are sorry to announce that this event has been postponed until the autumn, but watch this space for the launch of: Gramarye the Journal of the Sussex Centre for Folklore, Fairy Tales and Fantasy, (see p. 4).

Gr amarye The launch of the Journal of the Sussex Centre for Folklore, Fairy Tales and Fantasy

ednesday 16 May will see the launch of the Sussex Centre’s journal, Gramarye.

The first edition comprises 72 pages of professionally designed, printed and bound articles by the likes of: • Jacqueline Simpson on her folklore collaboration with Terry Pratchett;

Gramarye The Journal of the Sussex Centre for Folklore, Fairy Tales and Fantasy Issue I, Spring 2012

• Diane Purkiss on the ‘undomestic’ witch; • Maria Nikolajeva on her favourite story when she was young; • Karl Bell on the permutations of the urban legend Spring-heeled Jack; • a newly translated Danish fairytale by Stephen Badman and John Herbert; • a review by Robert Duggan of Anti-Tales: The Uses of Disenchantment; • a review by Karen Stevens of New World Orders in Contemporary Children’s Literature.

Exclusive discount The journal will be priced at £5 plus p&amp;p, but readers of our newsletter have the opportunity to pre-order your copy at a 20% discount. To receive a pre-order form, please contact h.robbins@chi.ac.uk

An Extr aordinary New Find? Jack Zipes talks to the Centre about the recent discovery of 500 fairy tales

here has been considerable media atten­ tion given to the discovery of new folktales by German scholar Franz Xaver von Schönwerth. A selection of Schönwerth’s folktales has been published in German under the title of Prinz Roßwifl (‘Roßwifl’ is a local dialect word for scarab or dung beetle!). One example, ‘The Turnip Princess’, was recently republished in the Guardian. While great claims have been for the value of this new collection of tales, fairy-tale expert and Sussex Centre Advisory Board Member Professor Jack Zipes urges caution. Zipes writes, ‘In discussing Prinz Roßwifl, the new collection of Schönwerth’s folktales, with the journalist Victoria Sussens-Messerer, it appears that Erika Eichenseer, the editor of this volume, has culled the fairy tales or wonder folk tales from manuscripts that she found in some 30 odd boxes in Schönwerth’s archives. I have only read Schönwerth’s tales from the earlier three volumes, and they range from boring to good examples of Bavarian customs. Nothing to get excited about, just as there is nothing to get excited about in the more recent example provided in the Guardian. Thus far, I have yet to read the tales in Prinz Roßwifl, but I have ordered them and am looking forward to do this.’ You can read the full article on the Centre website.

he Folklore Society and the Sussex Centre for Folklore, Fairy Tales and Fantasy are delighted to announce a joint conference on ‘Folklore and Fantasy’ at the University of Chichester on Friday 13th to Sunday 15th April 2012. Many folktales are closely related to the fantastic – through subject matter, content and impulse. Folklore often deals with the fantastic, or turns to the supernatural to provide explanations for extra­ordinary events. Similarly, folklore has long been a major source of inspiration for fantasy literature, from authors like Kevin Crossley-Holland and Angela Carter and graphic novelists like Neil Gai­man and Bill Willingham who take on and re-present traditional stories, to authors like Lloyd Alex­ander, Susan Cooper and Kate Thompson who draw on established tropes, to authors such as J.R.R. Tolkien, Susanna Clarke and Terry Pratchett who invent their own folk traditions. This three-day conference will explore, investigate and celebrate the relationship between folklore and fantasy. The Call for Papers deadline has passed and there has been an exceptionally strong range of proposals. The conference will begin at 2 p.m. on Friday 13 April with AGM for FLS members. This is followed by The Folklore Society Presidential Lecture by Mr Robert McDowall: all welcome. Folklore and Fantasy conference papers will begin at around 4.00 p.m. Conference fees include lunch on Saturday and Sunday and refreshments between sessions.

There will be a conference dinner on Friday evening: optional but pre-booking essential. All participants are required to pay the conference fees. Reduced rates for: speakers, FLS members, students, staff of University of Chichester, pensioners and unwaged. Accommodation is not provided but a list of hotels is available on request. Guest speakers include best-selling fantasy author Kate Forsyth and acclaimed folklorist Jacqueline Simpson.

ALL 3 DAYS including Conference Dinner

For more details go to http://sussexfolktalecentre.org/ folklore-and-fantasy. For the booking form and list of hotels, e-mail enquiries@folklore-society.com or tel. 0044 (0)207 862 8564.

ingston University and Chichester University present a conference to celebrate the bicentenary of the publication of the first volume of the Kinder- und Hausmärchen (Children’s and Household Tales) by Jacob and Wilhelm Grimm. This three-day conference will explore the trajectory of the Grimm phenomenon in the English-speaking world. The bicentenary will also be celebrated through story-telling events, readings, a creative writing prize and an exhibition of illustrations. The Call for Papers has now passed, and we have received around 90 proposals. This multidisciplinary conference has welcomed contributions from any disciplinary perspective including proposals to read creative work, screen films, mount performances and exhibit visual work.

Snow White and the Huntsman Bill Gray talks about his experiences as a Hollywood consultant Dr Bill Gray, Professor of Literary History at the University of Chichester and Director of the Sussex Centre for Folklore, Fairy Tales and Fantasy, recently acted as a consultant on the forth­coming Hollywood film Snow White and the Huntsman, starring Kristen Stewart, Charlize Theron and Chris Hemsworth. The film was directed by Rupert Sanders, produced by Joe Roth and will be distributed by Universal Pictures.

So, Bill, how did you come to be a consultant to Hollywood? I was invited to join the production team as ‘Mythic and Folklore Advisor’ to the film. I initially met the team in the Soho Hotel in London, and sub­ sequently at Pinewood Studios. I was impressed by the special effects sequences which the Director, Rupert Sanders, showed me on his laptop, and also by his vision of the film. He clearly wanted to make a version of Snow White that wasn’t just cute, or a typical American High School romance in fancy dress with some action sequences.

What effect have you had on the film? Sanders had read my book (Fantasy, Myth and the Measure of Truth) about the roots of literary fairy tales in German Romanticism, which included the Brothers Grimm. He was keen to endow the film with an element of symbolic depth and resonance which he believed were in the original material.

I tried to provide suggestions which I hoped might enhance this aspect of the film. What the final product will be like I have no idea, but I’m very keen to see it. I can’t at this stage make any detailed comments about the contents or themes of the film because I have signed a contract not to reveal any details of the film. However, as you can already see in the trailer, some of the special effects created by Rupert Sanders are stunning. I’ve also noticed that the names of the dwarves (with voices by some pretty famous actors – for example Ian McShane, Bob Hoskins and Ray Winstone) are taken from some suggestions I made to replace the names in the original script. So if you don’t like them I’m probably to blame!

Do you think your advice will make this Hollywood fairytale different from those Jack Zipes recently criticsed? I saw Jack Zipes’s interview in Salon (in a piece en­ titled ‘Are dark fairy tales more authentic?’) after I had started working on Snow White &amp; the Huntsman. I can see what he’s saying, and agree that Hollywood has a pretty dismal record in recreating fairy tales on the big screen. Certainly this new Snow White film is working against the Disney version, but, as I said earlier, what the final version will be like is in the hands of the gods, that is, the producers.

What was it like to work on a movie set?

It was a fascinating experience to be involved in the making of a Hollywood movie. I spent some time at Pinewood Studios during the filming and it was just incredible to see the scale of the production, the number and variety of people involved, and the

sheer amount of space it all took up. I’m one of those people who don’t pay much attention to film credits, but now I understand why they are so very long. And of course I’ll be scanning the credits of Snow White &amp; the Huntsman! Perhaps my most exciting moment was when I was interviewed on the set in the Evil Queen’s chamber. Unfortunately neither the magic mirror (being an expensive piece of kit) nor Charlize Theron (an even more expensive item) were there at the time—though my wife Lorna did spot the latter on the way to the canteen! Overall, I felt privileged to get an insight into the workings of the Hollywood movie industry, and look forward to seeing how successfully the interesting ideas and brilliant film techniques of Rupert Sanders are transmuted into the final product. Snow White and the Huntsman will be released 1 June 2012

ormer Sussex Centre Assistant Dr Jane Carroll will present a paper called ‘On the Edge of Ruin: Unexpected Pleasures in Unexpected Places in The Lord of the Rings’ at the School of English, Trinity College Dublin’s Conference on ‘Tolkien: The Forest and the City’. The conference will run on 21st – 22nd September 2012.

Registration and Fee: Conference Registration fee of €50 will cover conference pack, reception, tea and coffee, and a discount on the conference proceedings volume to be published by Four Courts Press. For conference program and registration forms, please contact Dr H. Conrad-O’Briain at conrado@tcd.ie For more information visit the School of English, Trinity College Dublin’s website.

Please contact Heather Robbins (h.robbins@chi.ac.uk) with any suggestions or feedback