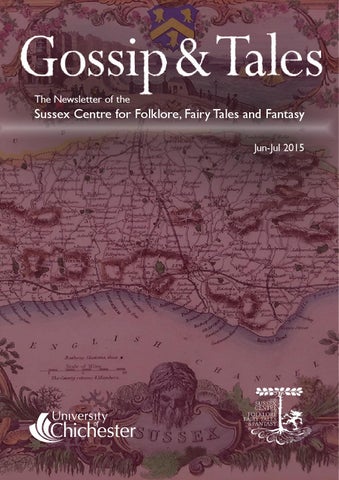 The Newsletter of the

Alice in Wonderland: an exhibition

Upcoming events at the Sussex Centre

A map of folklore in Sussex and the South Downs

Gramarye issue 7 is now available as an e-book from our online store. To guarantee your printed copy of future issues, please subscribe here. This issue’s contents include: • ‘Land Under Wave: Reading the Landscapes of Tiffany Aching’, Jane Carroll • ‘Jacek Yerka&#39;s Rhetoric of the Impossible’, Joe Young • ‘The King’s Amulet’, Rosalind Kerven • ‘The Seal Wife’, Judith Woolf • ‘They Say England Has No Folktales’, Jacqueline Simpson • ‘My Favourite Story When I Was Young’, Sadhana Naithani • A review of Veronica L. Shanoes’ Fairy Tales, Myth, and Psychoanalytic Theory: Feminism and Retelling the Tale, Naomi Wood • A review of J.R.R. Tolkien’s Beowulf: A Translation and Commentary, together with Sellic Spell, Tom Shippey • A review of Daniel Gabelman’s George MacDonald: Divine Carelessness and Fairytale Levity, Colin Manlove 3

• A review of Marina Warner’s Once Upon a Time, Martine Hennard Dutheil de la Rochère • A review of Malcolm C. Lyons’ Tales of the Marvellous and News of the Strange, Ruth B. Bottigheimer • A review of Adam Roberts’ The Riddles of The Hobbit, Jane Carroll • A review of Jelena Curcic’s Serbian Fairy Tales, Joanna Coleman • A review of Jonathan Walker’s Five Wounds: An Illuminated Novel, Robin Furth • A review of J.R.R. Tolkien: The Forest and the City, Alaric Hall Exclusive offer Gramarye readers are entitled to 20% off Scrivener software, the project management tool for writers. Just visit http://www.literatureandlatte.com/scrivener.php and enter the coupon code ‘SUSSEXCENTRE’. The printed edition of Gramarye 7 is also available from: • Atlantis Books (London) • Byre Books (Wigtown) • Emporium Bookshop (Cromarty) • Foyles (London) • Kims (Chichester)

PGR Symposium, 23 May 2015, University of Chichester The day kicked off with a keynote lecture by Professor Diane Purkiss on ‘Ancient Tales and an Early Modern Witch: the Case of Andro, the Man Who Knew Too Much’. Twitter reactions:

there were two more keynote lectures: Professor JohnVernon Lord, ‘Illustrating Wonderland and Looking-Glass’ (quite dark so we could see his beautiful illustrations clearly), followed by Dr Steven O’Brien reading his &#39;The Changeling’.

Panel Three, &#39;Gossip from the Forest: Spirits of Place in Fantastical Fiction&#39;, included Jennifer Reid, “Where this proude Robin and his yeomen rome”: Self-Government in the Greenwood’; Nick Campbell, ‘Spirits of Place: A New Perspective on William Mayne’; and Victoria Tedeschi, ‘Fantastical Forests and Enchanted Environments: Evaluating Environmental Identity in Victorian Editions of the Grimms’ Fairy Tales’.

of Alice in Wonderland by Three Auteurs’; and Aishwarya Subramanian (pic. left), ‘(Anti-con)Quest: Anticolonial Struggle and Colonial Gaze in the Chronicles of Narnia’. Panel Six, &#39;The World’s Fantastic: Stories Global, Local and Fantastical&#39;, included Mariam Zia, ‘Of Animals and Monsters: The World of The Adventures of Amir Hamza’, Sara Helen Binney, ‘Folklore and the Fantastic in Orkney and The Snow Child’, and Siddharth Pandey, ‘Novel Imaginations, Imaginary Novelties: Understanding the Glocalism of Indian English Fantasy’. 11

This event was kindly sponsored by www.Zharmae.com â&amp;#x20AC;&amp;#x201C; get your fiction fix! 12

Alice in Wonderland: an exhibition of illustrations A selection of illustrations from Alice&#39;s Adventures in Wonderland and Through the Looking Glass by John Vernon Lord and Mervyn Peake is now on display in the University of Chichester&#39;s Otter Gallery. The exhibition is part of the nationwide celebration of Alice&#39;s 150th anniversary, and runs in association with the &#39;Wonderlands&#39; symposium mentioned above. This is a free event running until September. For the gallery&#39;s opening times please visit http:// www.chi.ac.uk/otter-gallery/visit-us

Upcoming events at the Sussex Centre

Kate Mosse. &#39;The Taxidermist&#39;s Daughter&#39; Thursday 8 October 2015, 5.15-6.30 p.m., room tbc Inspired by the folklore and mythology of Sussex landscapes and seascape – and a homage to Kate’s childhood passion for a museum of taxidermy in Sussex – The Taxidermist’s Daughter is a Gothic thriller set in Fishbourne in 1912, as the flood waters are beginning to rise. The Chichesterbased bestselling novelist will celebrate paperback publication of her latest No. 1 bestseller by sharing her writing trade secrets: from old legends and ancient Sussex folklore, explaining how her research into taxidermy and bird mythology inspired by novel, and how landscape and Gothic fantasy provide the back drop for creating a novel. A unique event to hear Kate talking in her home town about the novel set in Fishbourne and Chichester. Tickets £5/£3 concessions; free to University staff and students. Contact h.robbins@chi.ac.uk for more information. 15

The Last Wolf of Scotland

he talented poet/musician/artist MacGillivray has published a debut collection which offers readers the literary equivalent of a shamanic initiation. The disturbing starting point of the book is the selfpenned story of Robert McGee, who as a boy in 1864 was scalped by Sioux warriors, speared, tomahawked, shot, and left for dead, but who later recovered to make a living in a Buffalo Bill&#39;s Wild West Circus. A terrifying photo of McGee accompanies his terrifying text, and the poems which follow are imagined as the inner swansong of the quasi-dismembered Scottish 13-year-old. You expect an epic, but the book unfolds as a cycle of lyric poems, each with an elusive episode cocooned within its linguistic silk. Subscriptions to Gramarye are available from the University of Chichester&#39;s online store. 16

A Map of Folklore in Sussex and the South Downs Sussex Day, 16 June 2015, saw the launch of a free, downloadable, interactive map of Sussex folklore on our website. This map is a prototype; the final map, illustrated by Abi Daker, will be relaunched in October 2015 with celebratory events across the South Downs National Park. If there are any folktales or variants we have missed from the map that you would like to see included in the final, please e-mail h.robbins@chi.ac.uk. The map is based primarily on Prof. Jacqueline Simpson&#39;s book, The Folklore of Sussex. One of the most interesting things about placing the folktales on a map has been finding the areas most densely populated by ghosts and witches! Ghost stories are the most popular folktale across Sussex and the South Downs. Sunken bell stories make a close second, although this is partly because, around Alfoldean, one sunken bell story has been claimed by several surrounding villages. The South Downs National Park is particularly full of ghosts and buried treasure, with witches and fairies following a close second. The South Downs National Park had the most folktales, with 63 folktales listed on the map, as well as 36 events marked on the folklore calendar, nine of which are still celebrated today. This may be because it is more rural than other areas 17

of Hampshire and Sussex, so older superstitions and oral tales haven&#39;t been lost through the more mobile populations found in urban areas. The folktales are distributed very evenly between West Sussex (52) and East Sussex (51). East Sussex has a few more events on its folklore calendar (35), including nine that are still celebrated. Brighton, in particular, is a hotbed of folklore. West Sussex has 30 events on the folklore calendar, of which seven are still celebrated.

This map shows how the folktales and traditions of Sussex and the South Downs are particularly dense around the coast where West and East Sussex meet, the areas around Shoreham, Lancing, Brighton and Lewes. 19

Our survey says ... To find out what people already knew about Sussex folklore, we selected five pieces of folklore from across the area of Sussex and the South Downs that we felt were fairly well known. We then asked respondents about these pieces of folklore, offering them multiple choice answers. Less than a quarter of respondents to our survey living in Sussex and the South Downs had heard of some of its most famous lore, including the Lyminster Dragon, the old Sussex fairies, the making of the Devil&#39;s Dyke and the Mistletoe Bride (which is actually a national tale). Respondents were actually more knowledgeable of Sussex and the South Downs if they lived outside of the area (a third had heard of the folklore), although respondents from outside of Sussex tended to already follow the Centre and be interested in folklore. Our lowest results were for the under-20s (zero correct results). So we really want to promote the map to schools, through the help of professional story tellers and other engaging activities, to spread these folktales to a new generation. Explore local folklore with our map Follow us on Facebook, Twitter or join our mailing list to be alerted when the final map is relaunched. 20

If you have any queries or feedback about this newsletter, please contact Heather Robbins at h.robbins@chi.ac.uk

The newsletter of the Sussex Centre for Folklore, Fairy Tales and Fantasy