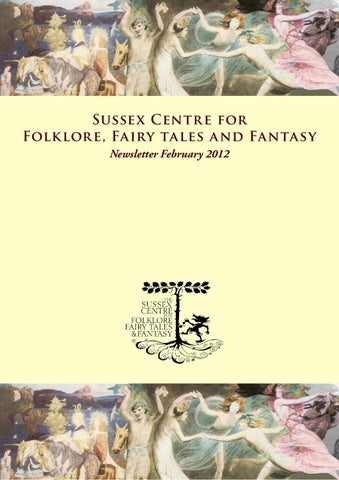 ello and welcome to 2012 at the Sussex Centre for Folklore, Fairy Tales and Fantasy. I’m Heather Robbins and I am absolutely delighted to introduce myself as the new assistant at the Centre. Coming straight from my role as commissioning editor at Phillimore publishing house, I hope to make my mark producing these news­letters, a highquality journal and smooth-running and popular events for the Centre. Please feel free to contact me at h.robbins@chi.ac.uk

illem de Blécourt, Honorary Research Fellow at the Huizinga Institute, Amster­dam, author of Werewolves and co-author of Cultural Approaches to the History of Medicine: Mediati­ng Medicine in Early Modern and Modern Europe, Beyond the Witch Trials: Witchcraft and Magic in Enlightenment Europe and Witchcraft Continued: Popular Magic in Modern Europe, will present a public lecture on ‘Images of Witches’. The Mitre Lecture Theatre, 5.15 – 6.30 p.m. Wednesday 21 March. For tickets (£5/£2 concessions) contact h.robbins@chi.ac.uk.

he Folklore Society and the Sussex Centre for Folklore, Fairy Tales and Fantasy are delighted to announce a joint conference on ‘Folklore and Fantasy’ at the University of Chichester on Friday 13th to Sunday 15th April 2012. Many folktales are closely related to the fantastic – through subject matter, content and impulse. Folklore often deals with the fantastic, or turns to the supernatural to provide explanations for extra­ordinary events. Similarly, folklore has long been a major source of inspiration for fantasy literature, from authors like Kevin Crossley-Holland and Angela Carter and graphic novelists like Neil Gai­man and Bill Willingham who take on and re-present traditional stories, to authors like Lloyd Alex­ander, Susan Cooper and Kate Thompson who draw on established tropes, to authors such as J.R.R. Tolkien, Susanna Clarke and Terry Pratchett who invent their own folk traditions. This three-day conference will explore, investigate and celebrate the relationship between folklore and fantasy. The Call for Papers deadline has passed and there has been an exceptionally strong range of proposals. The conference will begin at 2 p.m. on Friday 13 April with AGM for FLS members. This is followed by The Folklore Society Presidential Lecture by Mr Robert McDowall: all welcome. Folklore and Fantasy conference papers will begin at around 4.00 p.m. Conference fees include lunch on Saturday and Sunday and refreshments between sessions. 

There will be a conference dinner on Friday evening: optional but pre-booking essential. All participants are required to pay the conference fees. Reduced rates for: speakers, FLS members, students, staff of University of Chichester, pensioners and unwaged. Accommodation is not provided but a list of hotels is available on request.

For more details go to http://sussexfolktalecentre.org/ folklore-and-fantasy. For the booking form and list of hotels, e-mail enquiries@folklore-society.com or tel. 0044 (0)207 862 8564. 

ingston University and Chichester University present a conference to celebrate the bicentenary of the publication of the first volume of the Kinder- und Hausmärchen (Children’s and Household Tales) by Jacob and Wilhelm Grimm. This three-day conference will explore the trajectory of the Grimm phenomenon in the English-speaking world. The bicentenary will also be celebrated through story-telling events, readings, a creative writing prize and an exhibition of illustrations. The Call for Papers has now passed, and we have received over 80 proposals. This multi-disciplinary conference has welcomed contributions from any disciplinary perspective including proposals to read creative work, screen films, mount performances and exhibit visual work.

ur own Professor Bill Gray has taken on the role of consultant on the set of Universal Studios’ ‘Snow White and the Huntsman’. The movie gives the plot of ‘Snow White’ an action-packed Hollywood twist as the eponymous heroine trains in the art of war with the huntsman who had been dispatched to kill her. The film stars Twilight’s Kristen Stewart as Snow White, Thor’s Chris Hemsworth as the Huntsman and Charlize Theron as the Evil Queen. The official website can be found here.

Jack Zipes on Hollywood Fairy tales Is this dark twist a return to the more ‘authentic’, pre-Disney versions of fairy tales? You’ll have to watch the movie to decide for yourself, but Jack Zipes’ opinion on Hollywood’s fairy-tale films can be found at www.Salon.com

ormer Sussex Centre Assistant Dr Jane Carroll will present a paper called ‘On the Edge of Ruin: Unexpected Pleasures in Unexpected Places in The Lord of the Rings’ at the School of English, Trinity College Dublin’s Conference on ‘Tolkien: The Forest and the City’. The conference will run on 21st – 22nd September 2012.

Registration and Fee: Conference Registration fee of €50 will cover conference pack, reception, tea and coffee, and a discount on the conference proceedings volume to be published by Four Courts Press. For conference program and registration forms, please contact Dr H. Conrad-O’Briain at conrado@tcd.ie For more information visit the School of English, Trinity College Dublin’s website.

he German Fairy tale Route is a 600km route from Hanau to Bremen connecting various tourist attractions and regions linked to the stories and lives of the Brothers Grimm. Passing through various scenic regions, including eight nature parks, the route takes in such towns and cities as Hanau, Steinau, Marburg and Kassel. Several places along the Fairy Tale Route are connected with the fairy tales themselves, such as the House of Little Red Riding Hood; a Snow White Museum; the birthplace of Dorothea Vieh­ mann; the hill (Hoher Meissner) where Mother Hulda is said to have resided; Sababurg Castle, referred to as the Sleeping Beauty Castle; the town of Hamelin, of Pied Piper fame; a museum devoted to fairy tales and local legends (Deutsches Märchen- und Wesersagen­museum); and the city of Bremen, which is famous by the Town Musicians of Bremen. The original Children’s and Household Tales can be found in Kassel and in 2005 this collection was added to the UNESCO World Document Heritage List. Numerous picturesque medieval towns on the Route include Alsfeld, Hann, Fritzlar and Hameln. The 200th anniversary of the first publication of Children’s and Household Tales by the Grimm brothers will be observed in 2012-13 with a series of events. Many other events, open-air festivals, exhibits, and performances dealing with the topic of fairy tales are held annually. Visit the Deutsche Märchen-Straße website here.

elebrate 200 years of Grimm´s Fairy Tales with performers from across Europe, including storytelling and circus from Switzerland, storytelling and puppetry from Munich, and our specially commissioned revival of the acclaimed The Three Snake Leaves by the UK´s Company of Storytellers (see above). Other themes for this year include The Silk Road and Myths and Legends of Celtic Britain. For tickets and the full line-up go to www.beyondtheborder.com.

From Fata to Fairies

rom Fata to Fairies: Interdisciplinary Perspectives from Antiquities to the Present Day is the new book of the Lausanne University conference of the same name. A review will appear in the Sussex Centre for Folklore, Fairy Tales and Fantasy journal ... watch this space.

new ‘ripping’ adventure from the pen of the great Percy F. Westerman has been found by Portsmouth-based Westerman specialist Nigel Gossop during work late last year on a Westerman reminiscence project in Wareham, Dorset. The book, entitled At Their Country’s Call, is in the form of two bound and author-annotated publishers typescripts, probably from the Glasgowbased publisher Blackie and Son Limited. Until now, it was generally accepted that Percy F. Wester­ man wrote 20 stories of the Great War, but this story makes it 21 and brings the overall number of books written by Percy F. Westerman to a staggering 175 books. Details of the story are be kept under wraps until the second Westerman Seminar being held at Ports­ mouth Grammar School on Saturday 11 February where a synopsis of the story will be available to delegates. Details of the seminar can be obtained from Nigel Gossop at westermanyarns@gmail.com

he Sussex Centre for Folklore, Fairy Tales and Fantasy is now on Facebook! Here you can be kept up to date with news and events, talk with other members of the group and others attending the same events as you, comment on our activities and keep your events organised in your Facebook calendar. You can find our page here and RSVP for events here: Images of Witches public lecture Folklore and Fantasy conference After Grimm conference.

Home and Away Bill Gray in Head-to-Head against Frank Gray Monday 27 February at 5 p.m. in room M57, Grand Parade in central Brighton.

hichester University are holding the first of a series of joint cross-disciplinary arts and humanities research seminars with the University of Brighton.It’s called ‘Home and Away’ and is supported by AHRC funding.

This story of a literary power struggle begins with Professor Gray’s academic paper, ‘The Incomplete Fairy Tales of Robert Louis Stevenson’ (given in Edinburgh at the 2004 RLS Conference and later published in the Journal of Stevenson Studies; see the Guardian’s article on this paper) in which Gray argues for the authenticity of Stevenson’s ‘volume of Märchen’ rather than Colvin’s mangled version

(Island Nights’ Entertainments) which has been the canonical version for 120 years. Only with the New Edinburgh Edition of Stevenson’s Works will the original collection appear as Stevenson wanted. Dr Frank Gray, Director of Screen Archive South East, University of Brighton, will then present Archives and the Making of History. This talk will explore the issues of the inclusion or exclusion of historical objects from public collections and published histories by looking a number of films made in Sussex in the late 1930s.

his conference, held at St Peter’s Abbey, Ghent (Belgium) on Mon 20 – Wed 22 August 2012, intends to re-examine the fairy tale in ways that will shed light on the genre’s position within the conservative and innovative forces that make up for the historical development of literatures. More specifically, we will take off from the idea that throughout its history, the fairy tale has pro­vided authors with a space in which they could engage in literary experimentation and selfconsciously reflect on contemporary trends in the literary field. As a result, it was often tied up with or even constituted literary vanguard impulses. We can at least partially explain this phenomenon by considering the general traits of the genre itself: as fantastic narrative par excellence, the fairy tale has tended to ostentatiously distance itself from more realistic modes of experience and representation. More details about the conference and its Call for Papers (deadline 1 Mar) can be found here: http://www.fairytale.ugent.be/

Please contact Heather Robbins (h.robbins@chi.ac.uk) with any suggestions or feedback