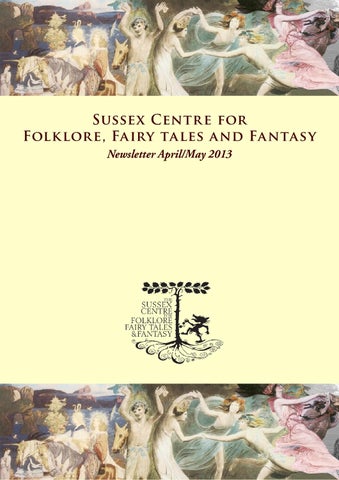 HERE WAS STANDING room only at the Sussex Centre for Folklore, Fairy Tales and Fantasy’s event: ‘Old, New, Borrowed and Blue: A Fairy Tale Symposium’ on 26 March 2013. Eminent folklorist Jacqueline Simpson, Visiting Professor of Folklore at Chichester University, began the proceedings with a fascinating talk en­titled ‘Terry Pratchett, Tiffany Aching and the Wee Free Men’. She drew on personal experience, not only of working with Sir Terry on their coauthored book The Folklore of Discworld, but also from her own childhood memories of the Downs, in which Pratchett’s Tiffany Aching series is set (Professor Simpson was born and bred, and has lived all her life, in Worthing). Children’s literature expert Nicholas Tucker followed on with a fresh look at the representation of parents and the parent-child relationship in Grimms’ Tales. An exciting feature of this event was the way each of the three speakers became involved in the discussion of the others’ presentations, so that it truly was a symposium, with three experts participating in the discussion of questions raised from the floor. Such a conversation between fairy-tale experts and the general public is exactly what the Sussex Centre for Folklore, Fairy Tales and Fantasy was founded to create and facilitate. World-leading fairy-tale expert Jack Zipes, Emeritus Professor at the University of Minnesota, rounded off proceedings with a brilliant talk about the emancipatory potential of storytelling, entitled ‘Once Upon a Time: Changing the World through Storytelling’. Professor Zipes’s talk included some engaging improvised storytelling

of his own. While he was not naïve about what storytelling can achieve in the real world, its utopian potential can, Professor Zipes said, light some fires in the cultural darkness of late modernity. He certainly lit some fires at Chichester, and the lively discussion after his lecture would have run long into the evening had not proceedings had to be called to a halt.

HIS EXHIBITION WILL feature the illustrations of six familiar and much-loved fairy-tales – Little Red Riding Hood, Cinderella, Snow White, Sleeping Beauty, Rapunzel and Beauty and the Beast – by Grimm, Perrault and other authors. As well as framed pictures, there will also be first edition books and other artefacts of various illustrators, among them Arthur Rackham, Charles Robinson, Mervyn Peake and Mabel Lucie Attwell.

‘Grimm Girls: Picturing the “Princess”’ is curated by Dr Anne Anderson, a Visiting Research Fellow at the University of Chichester, in association with the University’s English Department and the Sussex Centre for Folklore, Fairy Tales and Fantasy. Dr Anderson and leading fantasy and fairy-tale experts Terri Windling, Maria Nikolajeva and Jack Zipes will give presentations on the art of illustrating fairy-tales at a one-day symposium to be held at the University of Chichester on Monday 25 November. This event is open to the public.

O MARK THE centenary of Mervyn Peake’s birth, the Sussex Centre for Folklore, Fairy Tales and Fantasy (University of Chichester) organised an international conference in July 2011 entitled ‘Mervyn Peake and the Fantasy Tradition’. Peake had strong local connections with West Sussex. He lived, and worked on the Gormenghast books, at Burpham just down the road from Chichester (Gormenghast has a much disputed relationship with nearby Arundel Castle), and he and his wife and parents are buried in Burpham chuchyard. Mervyn Peake’s son Sebastian was much involved in the centenary conference. Sadly, Sebastian died last year, and the book of the conference is dedicated to his memory. Besides the exhibitions of Peake’s illustrations in the Pallant House and Otter Galleries in Chi­ chester, papers and presentations were given by scholars, artists, and writers from all over the world, and the book contains a selection of them. No other comparable collection of essays on Peake has ever been published. As well-known writer Joanne Harris says on the cover of the book, ‘The varied approaches taken by these papers contribute to our understanding and appreciation of Mervyn Peake’s work, both as writer and illustrator.’ The contributors take a wide variety of approaches to Peake’s work – not just the Gormenghast trilogy but also his books for children, his poetry, and his art. They compare Peake with other writers, explore the world of Gormenghast, and examine his characters and his poetical prose style. Two essays approach the graphic side of Peake’s oeuvre: the drawings he made in the manuscripts of the Titus

books, and his illustrations for Grimms’ Household Tales. To purchase a copy or to see a sample pdf, go here. The book has an extended Introduction by Professor William Gray, Director of the Sussex Centre for Folklore, Fairy Tales and Fantasy at the University of Chichester. Editor: G. Peter Winnington. ISBN: 978-1-4438-4411-6; 60 illustrations and two tables; RRP £44.99

RECENT ADVERTISING campaign by Moms Demand Action uses the censorship of some fairy tales to startling visual effect when compared to the relatively free market for guns in America. So how much censorship do fairy tales receive in the modern world? For a long time censoring literature specifically for the protection of children’s innocence was not considered necessary. These stories were originally oral tales, and those that were written down were not primarily aimed at children, but were Biblical or moral lessons for anyone able to read.

It was not until the 18th and 19th centuries that books began to be written specifically for children. The famous Grimms’ tales were published, recording the old oral folktales, and became hugely popular, but some worried about their themes of violence, brutal revenge, lust, and incest. The Grimms, ever the good salesmen, responded quickly, and future editions of the Kinder- und Hausmärchen

transformed cruel mothers into stepmothers, unmarried lovers into chaste companions, and one incestuous father into the devil. From the 19th century, childhood became romanticised as something separate from adulthood, and literature appealed to and encouraged childrenâ&#x20AC;&#x2122;s more pure and innocent natures. In 1807 Thomas Bowdler famously published a familyfriendly version of Shakespeare, with those parts thought to be offensive to well-brought-up women and children edited out. This trend of rewriting sweeter tales for children continued until at least the early 20th century in Europe, and today Disney continues this tradition. Fairy tales were also rewritten in Germanyâ&#x20AC;&#x2122;s Third Reich to make sure they correlated with its idea of the national identity; and at the end of the Second World War, the Allies banned the Grimm tales in Germany in case they had contributed to Nazi savagery.

Since the early 20th century Europe’s free press has been controlled by what sells, and fairy tales are still being rewritten to appeal to changing tastes. Meanwhile, censorship still continues elsewhere. Alice’s Adventures in Wonderland was banned in both America and China because of the animals’ unnatural abilities to speak, and more recently parental groups in the US have raised concerns that it encourages drug use and child abuse. California banned the Tarzan books when they came out because he and Jane were clearly living together outside of marriage. In 1983 Tennessee parents sued a school library for stocking the ‘Satan-oriented’ stories of ‘The Three Little Pigs’ and ‘Goldilocks and the Three Bears’; in 1990 California, a version of ‘Little Red Riding Hood’ was censored because she brought ‘wine’ as a gift to grandma; and the Harry Potter books are currently the most banned books in America (but still topped the best-sellers’ lists). The censors rely on two assumptions, that children are innocent, and that they are easily corrupted without a careful eye on their reading material. Much of Europe may think it enjoys freedom of press, but publishers with their eye on the global market will incorporate other countries’ censorship into their decisions.

ECADES BEFORE THE Third Reich was considering the use of Grimms to promote national identity, in 1916 English critic Edmond Gosse put together fairy tales from eleven different nations, all allies during the First World War. Inside, English illustrator Arthur Rackham provided 12 beautiful color plates. Gosse suggested that the book was put together in ‘amusement’ and nothing more, but closer scrutiny reveals a collection that is deadly serious in its intent. In the Charleston Library Society’s blog, Jessica Short, the Society’s cataloguing librarian, discusses how the tales in this collection were intended to contribute to the war’s propaganda. The book is currently being conserved and repaired by the Director of the society’s Book Bindery, Brien Beidler.

STUDY BY Egmont, publisher of children’s books such as the Mr Men, Thomas the Tank Engine and Winnie the Pooh, found that parents rated ‘language development’ as the most important benefit of reading to youngsters. They also said reading was important because it gives children a ‘head start’ at school and improves their imagination. The publisher complained, ‘They are associating reading with education and betterment rather than the magic of a good story. No child would say they read because it develops their language skills. ... Somehow reading has taken on the mantle of

being task-driven rather than pleasure-driven. It has become seen as a hard skill.’ The report called for more research to be done about the value of reading for pleasure in a child’s development.

Web Round-up The Society for Storytelling advises on how to make well-known classic stories fresh again – this is also a great site for finding story-telling events near you. King Ironsides, the Guardian’s fairy-tale about the life of Margaret Thatcher. A strange dinosaur comic on fairy-tale beginnings and endings around the world. Wayne State University’s Pinterest page for Fairy Tale Studies. Film and television critic and fantasy fan Anthony Morris on why ‘Game of Thrones’ ‘doesn’t work’. Do you disagree? Let us know on our Facebook page. Vote for your favourite Cinderella retelling for a chance to win a copy of Cinderella Tales from around the World. ‘In Fairy Land’: a virtual exhibition from Monash University.

PCOMING CONTENTS OF Gramarye Issue 3 (available from May) are as follows:

• ‘Hans Christian Andersen: It’s Me The Story’s About’, Neil Philip • ‘The Well of D’yerree-in-Dowan’, Patrick Ryan • ‘Dragons of East and West’, Rosalind Kerven • ‘Death and a pickled onion’, Jakob Löfgren • ‘My Favourite Story When I was Young’, William Gray • A review of Sophia Kingshill and Jennifer Westwood’s The Fabled Coast, Jacqueline Simpson • A review of Peter Davies’ The Fairies Return, Or, New Tales for Old, Andrew Teverson • A review of Philip Pullman’s Grimm Tales for Young and Old, Francisco Vaz da Silva • A review of Angela Carter and Decadence, Martine Hennard Dutheil de la Rochère • A review of Colin Manlove’s The Order of Harry Potter: Literary Skill in the Hogwarts Epic, Jane Carroll