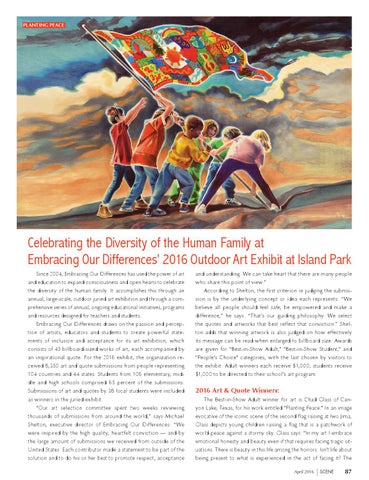 and understanding. We can take heart that there are many people who share this point of view.”

the diversity of the human family. It accomplishes this through an

According to Shelton, the first criterion in judging the submis-

annual, large-scale, outdoor juried art exhibition and through a com-

sion is by the underlying concept or idea each represents. “We

believe all people should feel safe, be empowered and make a

and resources designed for teachers and students.

difference,” he says. “That’s our guiding philosophy. We select

Embracing Our Differences draws on the passion and percep-

the quotes and artworks that best reflect that conviction.” Shel-

tion of artists, educators and students to create powerful state-

ton adds that winning artwork is also judged on how effectively

ments of inclusion and acceptance for its art exhibition, which

its message can be read when enlarged to billboard size. Awards

consists of 45 billboard-sized works of art, each accompanied by

an inspirational quote. For the 2016 exhibit, the organization re-

"People's Choice" categories, with the last chosen by visitors to

dle and high schools comprised 65 percent of the submissions. Submissions of art and quotes by 38 local students were included as winners in the juried exhibit.

2016 Art & Quote Winners: The Best-in-Show Adult winner for art is Chad Glass of Can-

yon Lake, Texas, for his work entitled "Planting Peace." In an image

thousands of submissions from around the world,” says Michael

evocative of the iconic scene of the second flag raising at Iwo Jima,

Shelton, executive director of Embracing Our Differences. “We

were inspired by the high quality, heartfelt conviction — and by

world peace against a stormy sky. Glass says: "In my art I embrace

the large amount of submissions we received from outside of the

emotional honesty and beauty even if that requires facing tragic sit-

United States. Each contributor made a statement to be part of the

uations. There is beauty in this life among the horrors. Isn’t life about

solution and to do his or her best to promote respect, acceptance

being present to what is experienced in the act of facing it? The April 2016