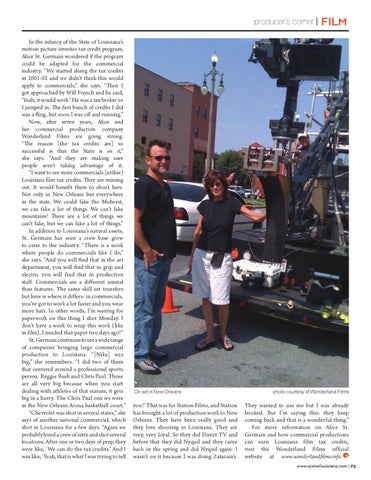 | FILM In the infancy of the State of Louisiana’s motion picture investor tax credit program, Alice St. Germain wondered if the program could be adapted for the commercial industry. “We started doing the tax credits in 2001-02 and we didn’t think this would apply to commercials,” she says. “Then I got approached by Will French and he said, ‘Yeah, it would work.’ He was a tax broker so I jumped in. The first bunch of credits I did was a fling, but soon I was off and running.” Now, after seven years, Alice and her commercial production company Wonderland Films are going strong. “The reason [the tax credits are] so successful is that the State is on it,” she says. “And they are making sure people aren’t taking advantage of it. “I want to see more commercials [utilize] Louisiana film tax credits. They are missing out. It would benefit them to shoot here. Not only in New Orleans but everywhere in the state. We could fake the Midwest, we can fake a lot of things. We can’t fake mountains! There are a lot of things we can’t fake, but we can fake a lot of things.” In addition to Louisiana’s natural assets, St. Germain has seen a crew base grow to cater to the industry. “There is a nook where people do commercials like I do,” she says. “And you will find that in the art department, you will find that in grip and electric you will find that in production staff. Commercials are a different animal than features. The same skill set transfers but here is where it differs: in commercials, you’ve got to work a lot faster and you wear more hats. In other words, I’m waiting for paperwork on this thing I shot Monday. I don’t have a week to wrap this work (like in film), I needed that paper two days ago!” St. Germain continues to see a wide range of companies bringing large commercial production to Louisiana. “[Nike] was big,” she remembers. “I did two of them that centered around a professional sports person. Reggie Bush and Chris Paul. Those are all very big because when you start dealing with athletes of that stature, it gets big in a hurry. The Chris Paul one we were in the New Orleans Arena basketball court.” “Chevrolet was shot in several states,” she says of another national commercial, which shot in Louisiana for a few days. “Again we probably hired a crew of sixty and shot several locations. After one or two days of prep, they were like, ‘We can do the tax credits.’ And I was like, ‘Yeah, that is what I was trying to tell

On set in New Orleans

you!’ That was for Station Films, and Station has brought a lot of production work to New Orleans. They have been really good and they love shooting in Louisiana. They are very, very loyal. So they did Direct TV and before that they did Nyquil and they came back in the spring and did Nyquil again. I wasn’t on it because I was doing Zatarain’s.

They wanted to use me but I was already booked. But I’m saying this: they keep coming back and that is a wonderful thing.” For more information on Alice St. Germain and how commercial productions can earn Louisiana film tax credits, visit the Wonderland Films official website at www.wonderlandfilms.info. S www.scenelouisiana.com | 73

Peter Facinelli- The Doctor Is In 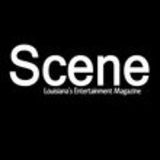