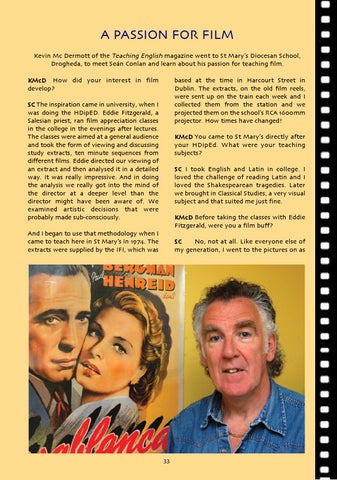 A PASSION FOR FILM Kevin Mc Dermott of the Teaching English magazine went to St Mary’s Diocesan School, Drogheda, to meet Seán Conlan and learn about his passion for teaching film. KMcD How did your interest in film develop?

based at the time in Harcourt Street in Dublin. The extracts, on the old film reels, were sent up on the train each week and I collected them from the station and we projected them on the school’s RCA 1600mm projector. How times have changed!

SC The inspiration came in university, when I was doing the HDipED. Eddie Fitzgerald, a Salesian priest, ran film appreciation classes in the college in the evenings after lectures. The classes were aimed at a general audience and took the form of viewing and discussing study extracts, ten minute sequences from different films. Eddie directed our viewing of an extract and then analysed it in a detailed way. It was really impressive. And in doing the analysis we really got into the mind of the director at a deeper level than the director might have been aware of. We examined artistic decisions that were probably made sub-consciously.

KMcD You came to St Mary’s directly after your HDipEd. What were your teaching subjects? SC I took English and Latin in college. I loved the challenge of reading Latin and I loved the Shakespearean tragedies. Later we brought in Classical Studies, a very visual subject and that suited me just fine. KMcD Before taking the classes with Eddie Fitzgerald, were you a film buff?

And I began to use that methodology when I came to teach here in St Mary’s in 1974. The extracts were supplied by the IFI, which was

SC No, not at all. Like everyone else of my generation, I went to the pictures on as 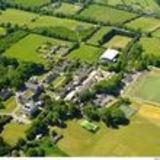