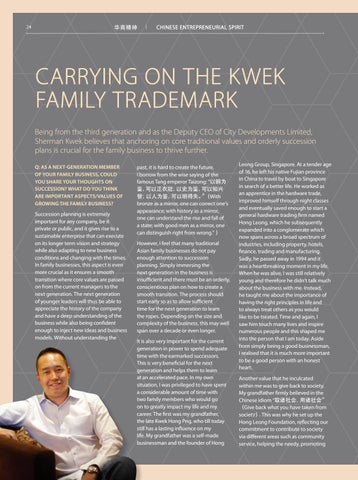 Carrying on the Kwek family trademark Being from the third generation and as the Deputy CEO of City Developments Limited, Sherman Kwek believes that anchoring on core traditional values and orderly succession plans is crucial for the family business to thrive further. Q: As a next-generation member of your family business, could you share your thoughts on succession? What do you think are important aspects/values of growing the family business?

Succession planning is extremely important for any company, be it private or public, and it gives rise to a sustainable enterprise that can execute on its longer term vision and strategy while also adapting to new business conditions and changing with the times. In family businesses, this aspect is even more crucial as it ensures a smooth transition where core values are passed on from the current managers to the next generation. The next generation of younger leaders will thus be able to appreciate the history of the company and have a deep understanding of the business while also being confident enough to inject new ideas and business models. Without understanding the

past, it is hard to create the future. I borrow from the wise saying of the famous Tang emperor Taizong: “以铜为 鉴，可以正衣冠；以史为鉴，可以知兴 替；以人为鉴，可以明得失。” （With bronze as a mirror, one can correct one’s appearance; with history as a mirror, one can understand the rise and fall of a state; with good men as a mirror, one can distinguish right from wrong.” ） However, I feel that many traditional Asian family businesses do not pay enough attention to succession planning. Simply immersing the next generation in the business is insufficient and there must be an orderly, conscientious plan on how to create a smooth transition. The process should start early so as to allow sufficient time for the next generation to learn the ropes. Depending on the size and complexity of the business, this may well span over a decade or even longer. It is also very important for the current generation in power to spend adequate time with the earmarked successors. This is very beneficial for the next generation and helps them to learn at an accelerated pace. In my own situation, I was privileged to have spent a considerable amount of time with two family members who would go on to greatly impact my life and my career. The first was my grandfather, the late Kwek Hong Png, who till today still has a lasting influence on my life. My grandfather was a self-made businessman and the founder of Hong

Leong Group, Singapore. At a tender age of 16, he left his native Fujian province in China to travel by boat to Singapore in search of a better life. He worked as an apprentice in the hardware trade, improved himself through night classes and eventually saved enough to start a general hardware trading firm named Hong Leong, which he subsequently expanded into a conglomerate which now spans across a broad spectrum of industries, including property, hotels, finance, trading and manufacturing. Sadly, he passed away in 1994 and it was a heartbreaking moment in my life. When he was alive, I was still relatively young and therefore he didn’t talk much about the business with me. Instead, he taught me about the importance of having the right principles in life and to always treat others as you would like to be treated. Time and again, I saw him touch many lives and inspire numerous people and this shaped me into the person that I am today. Aside from simply being a good businessman, I realised that it is much more important to be a good person with an honest heart. Another value that he inculcated within me was to give back to society. My grandfather firmly believed in the Chinese idiom “取诸社会，用诸社会” （Give back what you have taken from society）. This was why he set up the Hong Leong Foundation, reflecting our commitment to contribute to society via different areas such as community service, helping the needy, promoting

education and enhancing the arts and culture scene. The other person who influenced me greatly on the business front was my father, Kwek Leng Beng, a second generation member of the family business and the current Executive Chairman of the Hong Leong Group, Singapore. His achievements need no elaboration. He is a tough taskmaster and relentless in his pursuit of excellence, and he applied this same expectation not only to me but all the other employees in the company. Ultimately, while all the noble intentions I mentioned above are important, none of them would be possible or relevant unless the company was financially successful and able to stand strong in the face of the competition. Measured against lofty benchmarks, I gradually learnt how to handle pressure, focus on financial objectives and perform to the best of my abilities. At a young age, my father exposed me to different facets of the business. From informal dinner conversations that often had me quietly doing research to better understand the meaning of some of the topics to more formal events like business meetings and networking events, this level of exposure is very beneficial for a young executive’s development. My grandfather and father share common traits – acumen, vision and passion for the business. They worked tirelessly and have strong fighting spirits. Perseverance, determination and hard work are their trademarks. They led the company through various challenges and headwinds, seizing opportunities and emerging stronger than before. They also remained disciplined in their investments and exercised strict stewardship of company funds. I strongly believe these are all important values to have when it comes to leading and growing the family business. As the third generation member of the family business, I feel deeply

honoured to work in a company that my forefathers had tirelessly built up over so many decades. I endeavour to build upon this legacy and continue to grow the business while also staying anchored in the core values that have enabled our company to flourish.

deep respect for all my seniors at the Chamber, often benefiting from their kind sharing of valuable experience and advice. The current President Thomas Chua has done a superb job at steering the Chamber and ensuring its relevance across multiple generations.

Q: The Chamber has put in much effort to support and engage younger and next-generation entrepreneurs. Why do you think this effort by the Chamber is important? How can the Chamber continue to engage the younger generation?

Currently, the Chamber continues to be at the forefront of representing Small and Medium Enterprises (SMEs), many of which are family businesses, and providing a strong conduit for these SMEs to give feedback to the Singapore government on various policies. The Chamber also has in place a Young Entrepreneurs Network (YEN), which aims to foster networking amongst family businesses and allow the younger generation to share experiences with one other. More recently, the Chamber also embarked on a partnership with PwC to shed more light on succession planning practices within family companies.

As the apex body of the Chinese business community in Singapore, the Singapore Chinese Chamber of Commerce & Industry (“the Chamber”) has played a pivotal role in providing the business community with vast resources and an influential global Chinese business network. It is indeed an invaluable platform for next-generation leaders and young entrepreneurs to learn from senior businessmen who are highly successful in their respective fields. When I was first approached in 2012 by Teo Siong Seng, who was then President of the Chamber, I was very reluctant to stand for elections to be nominated to the Council. My impression of the Chamber then was that of an “old, rich man’s club” and it frankly didn’t hold much appeal. However, through Mr Teo’s patient and invaluable guidance, I eventually had a much better understanding of the Chamber and was also able to witness the transformation that the Chamber was undergoing. I felt very encouraged and saw it not only as a way to network and learn from the immense experience of successful business leaders but also as a form of giving back to society. Reflecting back on the last 3.5 years that I have been privileged enough to be associated with the Council, it was truly a great decision to immerse myself in this environment and I have

Going forward, the Chamber should continue with all its current initiatives as well as find new ways to engage the younger generation. To ensure that young people do not have the same type of misconceptions that I once had, perhaps the Chamber can recruit a greater number of young members and also do more media publicity and promotion, especially through some of the modern online channels and forums. Even the government has embraced this aspect and most Ministers have their own Facebook page, including Prime Minster Lee. As an increasing number of Singaporean firms venture overseas, especially to China, the Chamber’s initiatives such as setting up a second China office in Chongqing and hosting overseas investment seminars will be extremely helpful for next-generation entrepreneurs. These will help them to expand into various markets via strengthening ties with the local government as well as with the private sector in China. 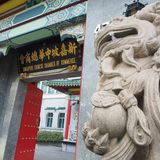