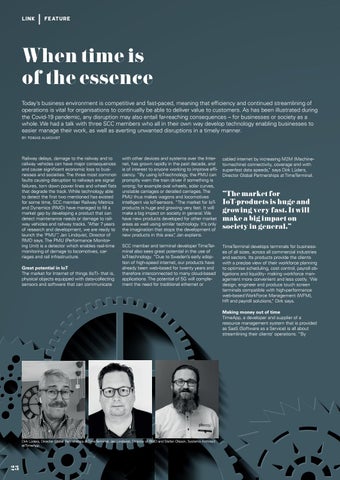 When time is of the essence Today’s business environment is competitive and fast-paced, meaning that efficiency and continued streamlining of operations is vital for organisations to continually be able to deliver value to customers. As has been illustrated during the Covid-19 pandemic, any disruption may also entail far-reaching consequences – for businesses or society as a whole. We had a talk with three SCC members who all in their own way develop technology enabling businesses to easier manage their work, as well as averting unwanted disruptions in a timely manner. BY: TOBIAS ALMQVIST

Railway delays, damage to the railway and to railway vehicles can have major consequences and cause significant economic loss to businesses and societies. The three most common faults causing disruption to railways are signal failures, torn down power lines and wheel flats that degrade the track. While technology able to detect the first two mentioned has existed for some time, SCC member Railway Metrics and Dynamics (RMD) have managed to fill a market gap by developing a product that can detect maintenance needs or damage to railway vehicles and railway tracks. “After 7 years of research and development, we are ready to launch the ‘PMU’”, Jan Lindqvist, Director of RMD says. The PMU (Performance Monitoring Unit) is a detector which enables real-time monitoring of damage to locomotives, carriages and rail infrastructure. Great potential in IoT The market for Internet of things (IoT) - that is, physical objects equipped with data-collecting sensors and software that can communicate

with other devices and systems over the Internet, has grown rapidly in the past decade, and is of interest to anyone working to improve efficiency. “By using IoT-technology, the PMU can promptly warn the train driver if something is wrong; for example oval wheels, solar curves, unstable carriages or derailed carriages. The PMU thus makes wagons and locomotives intelligent via IoT-sensors. “The market for IoTproducts is huge and growing very fast. It will make a big impact on society in general. We have new products developed for other market areas as well using similar technology. It’s only the imagination that stops the development of new products in this area”, Jan explains.

SCC member and terminal developer TimeTerminal also sees great potential in the use of IoT-technology. “Due to Sweden’s early adoption of high-speed internet, our products have already been web-based for twenty years and therefore interconnected to many cloud-based applications. The potential of 5G will complement the need for traditional ethernet or

”The market for IoT-products is huge and growing very fast. It will make a big impact on society in general.”

Making money out of time TimeApp, a developer and supplier of a resource management system that is provided as SaaS (Software as a Service) is all about streamlining their clients’ operations. “By 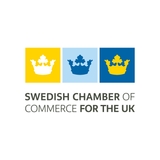 The LINK - Swedish Chamber of Commerce for the UK
Go explore