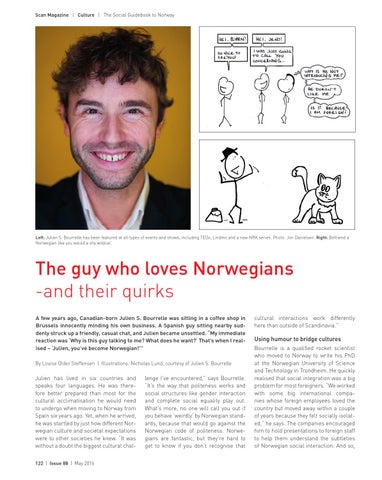 Left: Julien S. Bourrelle has been featured at all types of events and shows, including TEDx, Lindmo and a new NRK series. Photo: Jon Danielsen. Right: Befriend a Norwegian like you would a shy wildcat.

The guy who loves Norwegians -and their quirks A few years ago, Canadian-born Julien S. Bourrelle was sitting in a coffee shop in Brussels innocently minding his own business. A Spanish guy sitting nearby suddenly struck up a friendly, casual chat, and Julien became unsettled. “My immediate reaction was ‘Why is this guy talking to me? What does he want?’ That’s when I realised – ‘Julien, you’ve become Norwegian!’” By Louise Older Steffensen | Illustrations: Nicholas Lund, courtesy of Julien S. Bourrelle

Julien has lived in six countries and speaks four languages. He was therefore better prepared than most for the cultural acclimatisation he would need to undergo when moving to Norway from Spain six years ago. Yet, when he arrived, he was startled by just how different Norwegian culture and societal expectations were to other societies he knew. “It was without a doubt the biggest cultural chal122 | Issue 88 | May 2016

lenge I’ve encountered,” says Bourrelle. “It’s the way that politeness works and social structures like gender interaction and complete social equality play out. What’s more, no one will call you out if you behave ‘weirdly’ by Norwegian standards, because that would go against the Norwegian code of politeness. Norwegians are fantastic, but they’re hard to get to know if you don’t recognise that

cultural interactions work differently here than outside of Scandinavia.”

Using humour to bridge cultures Bourrelle is a qualified rocket scientist who moved to Norway to write his PhD at the Norwegian University of Science and Technology in Trondheim. He quickly realised that social integration was a big problem for most foreigners. “We worked with some big international companies whose foreign employees loved the country but moved away within a couple of years because they felt socially isolated,” he says. The companies encouraged him to hold presentations to foreign staff to help them understand the subtleties of Norwegian social interaction. And so,