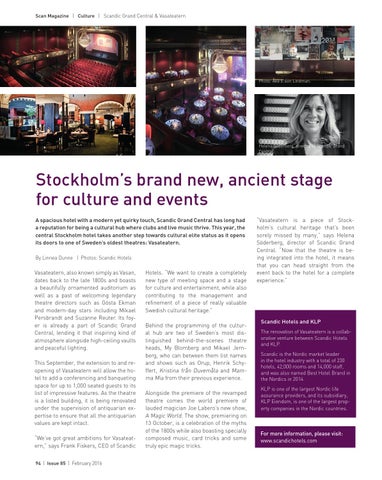 Stockholm’s brand new, ancient stage for culture and events A spacious hotel with a modern yet quirky touch, Scandic Grand Central has long had a reputation for being a cultural hub where clubs and live music thrive. This year, the central Stockholm hotel takes another step towards cultural elite status as it opens its doors to one of Sweden’s oldest theatres: Vasateatern. By Linnea Dunne | Photos: Scandic Hotels

Vasateatern, also known simply as Vasan, dates back to the late 1800s and boasts a beautifully ornamented auditorium as well as a past of welcoming legendary theatre directors such as Gösta Ekman and modern-day stars including Mikael Persbrandt and Suzanne Reuter. Its foyer is already a part of Scandic Grand Central, lending it that inspiring kind of atmosphere alongside high-ceiling vaults and peaceful lighting. This September, the extension to and reopening of Vasateatern will allow the hotel to add a conferencing and banqueting space for up to 1,000 seated guests to its list of impressive features. As the theatre is a listed building, it is being renovated under the supervision of antiquarian expertise to ensure that all the antiquarian values are kept intact. “We’ve got great ambitions for Vasateatern,” says Frank Fiskers, CEO of Scandic 94 | Issue 85 | February 2016

Hotels. “We want to create a completely new type of meeting space and a stage for culture and entertainment, while also contributing to the management and refinement of a piece of really valuable Swedish cultural heritage.” Behind the programming of the cultural hub are two of Sweden’s most distinguished behind-the-scenes theatre heads, My Blomberg and Mikael Jernberg, who can between them list names and shows such as Orup, Henrik Schyffert, Kristina från Duvemåla and Mamma Mia from their previous experience. Alongside the premiere of the revamped theatre comes the world premiere of lauded magician Joe Labero’s new show, A Magic World. The show, premiering on 13 October, is a celebration of the myths of the 1800s while also boasting specially composed music, card tricks and some truly epic magic tricks.

“Vasateatern is a piece of Stockholm’s cultural heritage that’s been sorely missed by many,” says Helena Söderberg, director of Scandic Grand Central. “Now that the theatre is being integrated into the hotel, it means that you can head straight from the event back to the hotel for a complete experience.”

Scandic Hotels and KLP The renovation of Vasateatern is a collaborative venture between Scandic Hotels and KLP. Scandic is the Nordic market leader in the hotel industry with a total of 230 hotels, 42,000 rooms and 14,000 staff, and was also named Best Hotel Brand in the Nordics in 2014. KLP is one of the largest Nordic life assurance providers, and its subsidiary, KLP Eiendom, is one of the largest property companies in the Nordic countries.