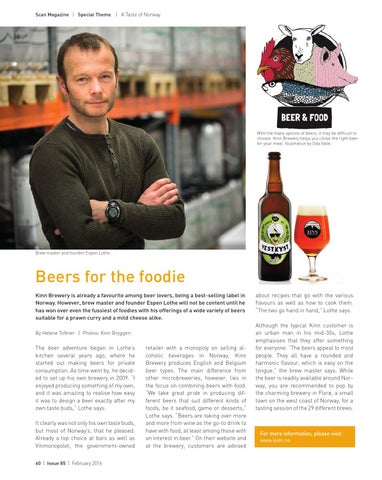 With the many options of beers, it may be difficult to choose. Kinn Brewery helps you chose the right beer for your meal. Illustration by Oda Valle.

Beers for the foodie Kinn Brewery is already a favourite among beer lovers, being a best-selling label in Norway. However, brew master and founder Espen Lothe will not be content until he has won over even the fussiest of foodies with his offerings of a wide variety of beers suitable for a prawn curry and a mild cheese alike. By Helene Toftner | Photos: Kinn Bryggeri

The beer adventure began in Lothe’s kitchen several years ago, where he started out making beers for private consumption. As time went by, he decided to set up his own brewery in 2009. “I enjoyed producing something of my own, and it was amazing to realise how easy it was to design a beer exactly after my own taste buds,” Lothe says. It clearly was not only his own taste buds, but most of Norway’s, that he pleased. Already a top choice at bars as well as Vinmonopolet, the government-owned 60 | Issue 85 | February 2016

retailer with a monopoly on selling alcoholic beverages in Norway, Kinn Brewery produces English and Belgium beer types. The main difference from other microbreweries, however, lies in the focus on combining beers with food. “We take great pride in producing different beers that suit different kinds of foods, be it seafood, game or desserts,” Lothe says. “Beers are taking over more and more from wine as the go-to drink to have with food, at least among those with an interest in beer.” On their website and at the brewery, customers are advised

about recipes that go with the various flavours as well as how to cook them. “The two go hand in hand,” Lothe says. Although the typical Kinn customer is an urban man in his mid-30s, Lothe emphasises that they offer something for everyone. “The beers appeal to most people. They all have a rounded and harmonic flavour, which is easy on the tongue,” the brew master says. While the beer is readily available around Norway, you are recommended to pop by the charming brewery in Florø, a small town on the west coast of Norway, for a tasting session of the 29 different brews.