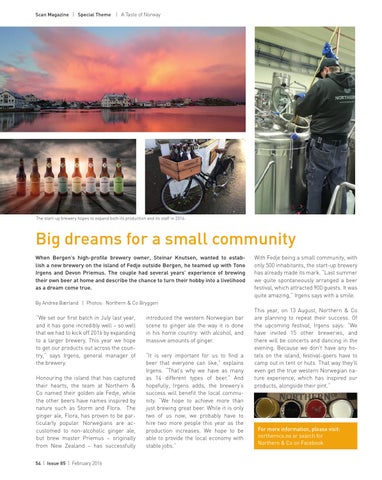 The start-up brewery hopes to expand both its production and its staff in 2016.

Big dreams for a small community When Bergen’s high-profile brewery owner, Steinar Knutsen, wanted to establish a new brewery on the island of Fedje outside Bergen, he teamed up with Tone Irgens and Devon Priemus. The couple had several years’ experience of brewing their own beer at home and describe the chance to turn their hobby into a livelihood as a dream come true.

With Fedje being a small community, with only 500 inhabitants, the start-up brewery has already made its mark. “Last summer we quite spontaneously arranged a beer festival, which attracted 900 guests. It was quite amazing,” Irgens says with a smile.

“We set our first batch in July last year, and it has gone incredibly well – so well that we had to kick off 2016 by expanding to a larger brewery. This year we hope to get our products out across the country,” says Irgens, general manager of the brewery. Honouring the island that has captured their hearts, the team at Northern &amp; Co named their golden ale Fedje, while the other beers have names inspired by nature such as Storm and Flora. The ginger ale, Flora, has proven to be particularly popular. Norwegians are accustomed to non-alcoholic ginger ale, but brew master Priemus – originally from New Zealand – has successfully 54 | Issue 85 | February 2016

introduced the western Norwegian bar scene to ginger ale the way it is done in his home country: with alcohol, and massive amounts of ginger. “It is very important for us to find a beer that everyone can like,” explains Irgens. “That’s why we have as many as 14 different types of beer.” And hopefully, Irgens adds, the brewery’s success will benefit the local community. “We hope to achieve more than just brewing great beer. While it is only two of us now, we probably have to hire two more people this year as the production increases. We hope to be able to provide the local economy with stable jobs.”

This year, on 13 August, Northern &amp; Co are planning to repeat their success. Of the upcoming festival, Irgens says: “We have invited 15 other breweries, and there will be concerts and dancing in the evening. Because we don’t have any hotels on the island, festival-goers have to camp out in tent or huts. That way they’ll even get the true western Norwegian nature experience, which has inspired our products, alongside their pint.”