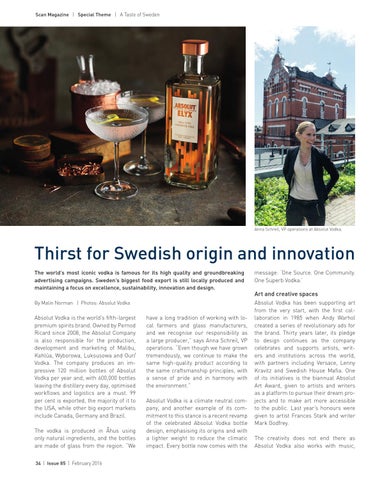 Thirst for Swedish origin and innovation The world’s most iconic vodka is famous for its high quality and groundbreaking advertising campaigns. Sweden’s biggest food export is still locally produced and maintaining a focus on excellence, sustainability, innovation and design.

message: ‘One Source. One Community. One Superb Vodka.’

Absolut Vodka has been supporting art from the very start, with the first collaboration in 1985 when Andy Warhol created a series of revolutionary ads for the brand. Thirty years later, its pledge to design continues as the company celebrates and supports artists, writers and institutions across the world, with partners including Versace, Lenny Kravitz and Swedish House Mafia. One of its initiatives is the biannual Absolut Art Award, given to artists and writers as a platform to pursue their dream projects and to make art more accessible to the public. Last year’s honours were given to artist Frances Stark and writer Mark Godfrey.

Absolut Vodka is the world’s fifth-largest premium spirits brand. Owned by Pernod Ricard since 2008, the Absolut Company is also responsible for the production, development and marketing of Malibu, Kahlúa, Wyborowa, Luksusowa and Our/ Vodka. The company produces an impressive 120 million bottles of Absolut Vodka per year and, with 600,000 bottles leaving the distillery every day, optimised workflows and logistics are a must. 99 per cent is exported, the majority of it to the USA, while other big export markets include Canada, Germany and Brazil. The vodka is produced in Åhus using only natural ingredients, and the bottles are made of glass from the region. “We 34 | Issue 85 | February 2016

have a long tradition of working with local farmers and glass manufacturers, and we recognise our responsibility as a large producer,” says Anna Schreil, VP operations. “Even though we have grown tremendously, we continue to make the same high-quality product according to the same craftsmanship principles, with a sense of pride and in harmony with the environment.” Absolut Vodka is a climate neutral company, and another example of its commitment to this stance is a recent revamp of the celebrated Absolut Vodka bottle design, emphasising its origins and with a lighter weight to reduce the climatic impact. Every bottle now comes with the

The creativity does not end there as Absolut Vodka also works with music,