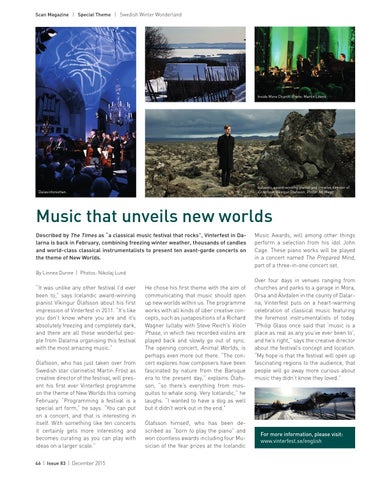 Music that unveils new worlds Described by The Times as “a classical music festival that rocks”, Vinterfest in Dalarna is back in February, combining freezing winter weather, thousands of candles and world-class classical instrumentalists to present ten avant-garde concerts on the theme of New Worlds.

Music Awards, will among other things perform a selection from his idol John Cage. These piano works will be played in a concert named The Prepared Mind, part of a three-in-one concert set.

“It was unlike any other festival I’d ever been to,” says Icelandic award-winning pianist Víkingur Ólafsson about his first impression of Vinterfest in 2011. “It’s like you don’t know where you are and it’s absolutely freezing and completely dark, and there are all these wonderful people from Dalarna organising this festival with the most amazing music.” Ólafsson, who has just taken over from Swedish star clarinetist Martin Fröst as creative director of the festival, will present his first ever Vinterfest programme on the theme of New Worlds this coming February. “Programming a festival is a special art form,” he says. “You can put on a concert, and that is interesting in itself. With something like ten concerts it certainly gets more interesting and becomes curating as you can play with ideas on a larger scale.” 46 | Issue 83 | December 2015

He chose his first theme with the aim of communicating that music should open up new worlds within us. The programme works with all kinds of über creative concepts, such as juxtapositions of a Richard Wagner lullaby with Steve Reich’s Violin Phase, in which two recorded violins are played back and slowly go out of sync. The opening concert, Animal Worlds, is perhaps even more out there. “The concert explores how composers have been fascinated by nature from the Baroque era to the present day,” explains Ólafsson, “so there’s everything from mosquitos to whale song. Very Icelandic,” he laughs. “I wanted to have a dog as well but it didn’t work out in the end.” Ólafsson himself, who has been described as “born to play the piano” and won countless awards including four Musician of the Year prizes at the Icelandic

Over four days in venues ranging from churches and parks to a garage in Mora, Orsa and Älvdalen in the county of Dalarna, Vinterfest puts on a heart-warming celebration of classical music featuring the foremost instrumentalists of today. “Philip Glass once said that ‘music is a place as real as any you’ve ever been to’, and he’s right,” says the creative director about the festival’s concept and location. “My hope is that the festival will open up fascinating regions to the audience, that people will go away more curious about music they didn’t know they loved.”